The lack of in-depth and critical inquiry into the impact of resettlement in Singapore is of concern, because resettlement has been and would continue to be part of Singapore’s urban development reality. Therefore, They Told Us to Move is a timely book that features stories from the ground – from representatives of the affected population themselves. Each of the nine interview transcripts in the book is paired with a reflection essay by a Singapore academic. The editors categorise the nine interviews and essays into three themes: 1) family, neighbour, society; 2) care, service, policy; and 3) history, memory, heritage. 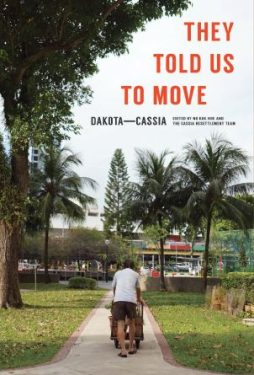 The strength of the book is mainly on the clustering of each interview with a reflection writing and an essay. Such structure allow readers to quickly relate the relocated person’s account to the conceptual discussion in the reflection writing and short academic essay. The essay reflects the topics in the interview with the larger literature without overwhelming the readers with jargons. For example, the first chapter features a 30-year-old female interviewee who has five children with a sick husband, while the reflection writing goes deeper into the active engagement of the interviewee with her neighbours and the team of volunteers. In the same cluster of interview-reflection-essay, the third chapter is written by a university-based academic that questions the assumption that the woman became poor because of her “poor choices.” Instead, the essay inquired the structure of wage work and care responsibilities that placed much burden on the female breadwinner. The essay also questioned the “valorization of motherhood” as one that normalizes the role of women as caregivers, as well as other social judgements on having so many children, which makes the economic conditions more unfavourable for the interviewee.

By structuring the book as such, the editors do not frame this book as a purely academic book. Rather, They Told Us to Move is a compilation of life stories that put faces on poverty and resettled population. There are at least two concepts that reverberates throughout the nine chapters of the book. First is the notion of the home as an essential part of being human, not just an exchangeable asset. The deep personal dimension of each story becomes the basis to argue that resettlement is not only about replacement flats and monetary compensation, but is about the social and economic ecosystem of the neighbourhood. As Rocky Howe summarises in the book’s reflective conclusion: ”Home is the story written by all of us” (p. 249) as a criticism of ignorance towards social experiences of the affected population.

Second, throughout the book, They Told Us to Move conveys a sense of disempowerment among those who were resettled. Disempowerment of the disadvantaged and marginalised in They Told Us to Move also somehow reminds me of Teo You Yenn’s ethnography in This is What Inequality Looks Like (2018). “Power is not a frame of mind but a material condition” (Teo, 2018). This is most vividly demonstrated in one of the interview excerpts in They Told Us to Move, when being asked what she would say if he could tell the government her views: “We are citizens, we cannot tell the government what to do, we have no opinions. We are elderly people, what can we say? We cannot say. We just want to see how this place is transformed, what it becomes” (p. 169).

Having studied forced evictions in cities of Indonesia, many points discussed in the book resonate with what I found in evictees or eviction-threatened population (Padawangi, 2019). Spatial reliance for social support and economic survival is often the case for many of the urban poor; that even when the eviction comes with relocation package to seemingly more modern flats, the social and economic support structures may not survive the relocation, and that would impact their livelihoods, everyday lives, and psychological well-being at the new place. Forced detachment from the home to be relocated to a new place could also result in further disempowerment, as it becomes a reminder that their aspirations did not matter to policy makers. Therefore, the conclusion section of the book that states “the impact of being relocated is profoundly greater on those who are disadvantaged and marginalised in society,” is not a new finding in forced relocation, although it is still something that needs further investigation in Singapore.

Padawangi, Rita (2019). “Forced Evictions, Spatial (Un)certainties and the Making of Exemplary Centres in Indonesia.” Asia Pacific Viewpoint 60 (1), pp. 65-79.
Teo You Yenn (2018). This is What Inequality Looks Like. Singapore: Ethos Books.