The contention between protesters and the monarchy that has unfolded in Thailand since early 2020 looks like being a David and Goliath contest. While the protesters are mostly high school and university students who demand democracy and monarchy reform, the crown is one of the oldest and most powerful institutions of the kingdom. The former use smartphones and computers to express their demands and mobilize their movement; the latter has state apparatuses on its side. The police, the army, and the judicial are active and aggressive to protect the throne from the unprecedented discussion, criticism, and mockery of the monarchy among the rebellious demonstrators. Political power, however, is not the only thing that makes the young dissenters an underdog when confronted with the mighty monarchy. As this essay will show, economic power also makes the contention between the protests and the palace a lopsided match.  While the demonstrations are financed by private donations, and most protesters have not even entered the labor market and earned a living, the monarchy is the world’s wealthiest crown. On top of that, standing by His Majesty are the kingdom’s wealthiest capitalists who have been loyal to the throne through thick and thin.

The crown is filthy rich. Conservatively estimated to be around $70 billion, 1 the monarchy’s wealth comes from three major sources: state budget, business investment, and corporate donation. Although the first source is valuable as it amounts more than $1 billion a year, 2 the second one is the palace’s bread and butter. The reigning monarch, King Vajiralongkorn, is the biggest shareholder of the Siam Cement Group, the largest cement company in Southeast Asia, and the Siam Commercial Bank, one of Thailand’s largest commercial banks. He is also one of the biggest landlords of the kingdom, owning more than 16,000 acres of property throughout Thailand. 3 His real estate in Bangkok alone was estimated, more than a decade ago, at $31 billion in value. 4 Unlike the former two types of royal income, corporate donation to the monarchy is difficult to be put into numbers as the palace has not publicly provided any information regarding how much money a private company donates to royal charities, and how much money the crown actually spends in its philanthropic projects. The donation, nevertheless, is crucial for wealth accumulation in Thai capitalism. It has been an activity that bonds the crown with leading corporations both inside and outside the kingdom. It provides an opportunity for the royals and the rich to create a business partnership and political alliance. It lends royal approval and prestige to giant enterprises. It also shows that monied moguls are the true-blue supporters of the monarchy regardless of the change of regimes and reigns.

In the face of the recent protest movement, one of the largest mass demonstrations in Thai history, the alliance between the crown and capitalists remains strong. In fact, one can argue that the protests make the partnership between the royals and the rich even stronger and clearer. On August 10, 2020, after months of mobilizing its force and gaining support from the young people nationwide, the protest movement staged a large demonstration at Thammasat University, and it proposed that the monarchy should be reformed in line with democratic principles. In this event, what thousands of protesters wanted from the monarchy was spoken out loud for the first time. One of protest leaders read the manifesto of ten demands for monarchy reform. Some of those demands deal with the political questions of the monarchy such as the extraconstitutional role of the crown in national politics, the monarch’s immunity against lawsuits, and the harsh punishment of lèse majesté. Other demands, meanwhile, aim to settle the crown’s economic questions. Those include the indistinction between the monarch’s personal assets and those of the crown, the excessive amount of state budget allocated to the palace, and the unaccountability of corporate donation to royal charities. Ending with a powerful message “[the monarchy] should be able to be controlled, audited, and criticized and it should not be a burden on the people,” 5 the manifesto sent shock waves through the palace. Regarding the protest movement a threat to the throne, the monarchy needed to defend its political and economic status. As usual, the monarchy could count on state machines to restore the kingdom’s pecking order. Several protesters in that event were later arrested and put in prison on lèse majesté charges. Likewise, the crown could lean on big capitalists. As the monarchy was menaced by the masses, the moguls wasted no time to show their solidarity with the crown.

Just two days after the protesters declared their demands, the kingdom’s wealthiest tycoons went to the palace. They were granted an audience with the King and Queen, a rare opportunity for Thai subjects as their reigning monarch has spent most of his time in Germany instead of his home country. The superrich came to the court not only to show their solidarity with the monarchy. Besides moral support, they also provided financial sponsorship to the crown through private donations. The list of those tycoons looked like a who’s who of Thai capitalism. Only the representatives of nine affluent families had a privilege to stand before the royal couple. 6 Leading into the court was the richest Thai capitalist, Dhanin Chearavanont, the senior chairman of the Charoen Pokphand Group, Thailand’s largest private company and one of the world’s largest producers of animal feed and livestock. With an estimated wealth of $30.7 billion, his family was ranked 21st on the world’s richest families list in 2020. 7 After him was Charoen Sirivadhanabhakdi, the $10.5 billion magnate who owns ThaiBev, the kingdom’s largest and one of Southeast Asia’s largest beverage companies. His family is the biggest property developer and landlord of the country. 8

Also humble before His Majesty were the well-known clans that were included in the list of Thailand’s richest families in 2020. With a $9.5 billion fortune, the Chirathivats control the Central Group, the country’s biggest mall developer. Holding the largest shares of Gulf Energy Development, Thailand’s third-largest energy producer, the Ratanavadis were worth $6.8 billion. With a $3.8 billion fortune, the Srivaddhanaprabhas run King Power, the nation’s leading operator of airport duty-free stores, and the English football club Leicester City. The Tangkaravakoons own TOA Paint, the country’s biggest paint company, and their net worth was $3.1 billion. Running Bangkok Dusit Medical Services, Thailand’s largest private hospital operator, and Bangkok Airways, the Prasarttong-Osoths were worth $3.1 billion. The Bhirombhakdis own Boon Rawd Brewery, Thailand’s oldest brewery, and their fortune was estimated to be at $1.8 billion in value. Thanks to their ownership of the Kasikorn Bank, the nation’s second-largest lender, the Lamsams were worth $860 million. 92020 might go down in Thai history as one of the most difficult years of the monarchy. Yet, having the police, the army, the judiciary, and the capitalist class on its side, the monarchy was able to weather the storm. In 2021, thanks to violent crackdowns, the arrest of protest leaders, the solidarity of the ruling class, and the coronavirus pandemic, the protest movement is on the wane.

The monarchy, meanwhile, still shows no sign of its institutional reform. Instead, the monarch does not shy away from showing gratitude to those who stood by him through tough times. On February 1, 2021, King Vajiralongkorn granted ones of the kingdom’s highest royal decorations to fifty businessmen. 10 Thirty-eight of them were members of the nine families, the true-blue who stuck with the crown last year when the throne was in trouble. Today, it is uncertain whether the young dissenters will be able to regroup, regain its strength, and reignite the mass movement nationwide. What is certain, however, is that the monarchy is not alone in its contest with the masses. Unwaveringly loyal to His Majesty are his partners in crime, not least those moguls in the market. 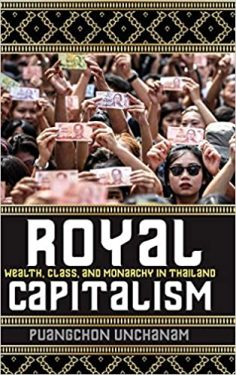 Banner: The occupation of Sanam Luang, Bangkok by demonstrators on 19 September 2020. Wikipedia Commons