Prior to the end of the Cold War, the Southeast Asian region underwent different political crises, revolutions, and uprisings. Some of them were anti-colonial movements while others were anti-dictator movements. The most notable uprisings in Southeast Asia were the 8888 Uprising in Myanmar, the 1986 EDSA People Power Revolution in the Philippines, the August Revolution in Vietnam, and the Hotel Yamato Incident in Indonesia, among others. The fall of the Communist bloc after the Cold War has changed the political landscape in Southeast Asia, including efforts to democratize. However, this period did not signify an uncommonness of the revolutions and uprisings that happened to the region in the past. Post-Cold War Southeast Asia is still characterized by a frequent occurrence of revolutions, albeit with more creative ways of waging them, aided by technology and new media.

The State of Political Art in Modern Southeast Asia

The Post-Cold War order in Southeast Asia did not only bring changes to the region’s political climate, but also to its socio-economic situation brought about by specific changes in states’ policy directions, such as the doi moi policy of Vietnam, Singapore being one of the “Asian Tigers”, and Suharto’s New Economic Order in Indonesia, and other initiatives that are influenced by globalization. Both the positive and negative developments brought upon by all of these changes in the region have enabled artist activists to come up with new and unique ways to express their sentiments on different political and socio-economic issues such as corruption, poverty, inequality, environmental problems, authoritarianism, among others. 1 To most artists, the choice of the medium of an artwork even before conceptualizing on how to deliver the message of the said artwork, is already political. 2

The 2021 Myanmar Crisis: What is Happening and Why?

On 1 February 2021, the Tatmadaw (Myanmar’s military), led by General Min Aung Hlaing, seized power over Myanmar and declared a nationwide state of emergency following their election protests over the landslide victory of Aung San Suu Kyi and the National League for Democracy (NLD) party during the 2020 elections. The said election protests were dismissed because of a lack of evidence of wrongdoing, yet the Tatmadaw held Suu Kyi in an unknown location, and has continued to capture activists and other citizens who rose against the Tatmadaw. Since then, around 5,200 political prisoners have been detained by the junta and almost 900 have died, including 72 children, according to the Assistance Association for Political Prisoners (AAPP). 3 The junta was also held responsible for the attacks on the ethnic minorities in Myanmar, particularly the Rohingyas. 4

The fear of being captured by the military junta did not stop groups of protesters, including the Generation Z and artist activists, from taking to the streets and expressing their angst against the military rule in Myanmar. Curfews followed, as well as censorship and deprivation of basic rights. What is unique about this uprising is the prevalence of several creative means to rally against the junta which were most likely not seen in other recent uprisings in other parts of the world. In Myanmar, protesters have been using different mediums of artwork and other contemporary channels that did not exist during the periods of regional independence movements and the Cold War. Some forms of protests come in songs, memes, references from movies, murals, digital art and merchandise, poetry, video installations, performances, and graffiti walls.

A huge symbolic aspect of the Myanmar Protests have references from Hollywood, particularly in specific movies (also known as “the Hollywood effect”). 5 The iconic three finger salute was adopted from the Hunger Games Trilogy. This three-finger salute from the said movie was not new to Southeast Asia as it has been also used by the protesters in Thailand in 2020. This symbol has become very powerful to Myanmar protesters to the point that they have been projecting illustrations of it in buildings and a website (threefingers.org) was built in order to encourage anyone from all parts of the world to upload their artworks containing the three finger salute. The website has gained so much international popularity that artists from other parts of the world as far as Europe and Latin America have uploaded their works on the website.

Aside from the popular Hunger Games symbolic adaptation, other influences of Hollywood in the Myanmar protests include the chant “yibambe” (which means “hold fast”) that has references from the movie The Black Panther. More interestingly, the integration of the symbolism of the Guy Fawkes Mask from the movie V for Vendetta was also seen evident during the course of the protests. Unlike the Hong Kong Protests which used the exact same appearance of the mask used in the movie, the protesters in Myanmar gave it a very unique twist: they painted it with a United Nations logo at the forehead and a palm covering the mouth with the Chinese flag to symbolize China’s interference in the UN’s handling of the said issue. 6 Lastly, the Generation Z has referred to the song WAP by Cardi B and Megan Thee Stallion to create their own memes and witty statements for their protest posters. 7

Continuity and Change in (Creative) Activism in Myanmar and Southeast Asia

Given all these whole context of the evolution of creative activism in Southeast Asia as seen from the Myanmar Protests, what patterns continued and changed? And more importantly, what were the factors that facilitated these patterns?

The power of technology has made a lot of political and non-political revolutions possible, and the options that the Internet offers were obviously not available during the war and post-colonial era. How we revolt against a certain leader, government, ideology, or policy has completely changed. Protesters are now able to render themselves anonymous and even physically hit the streets, but this is not to say that the traditional type of protests will vanish anytime soon, as seen in the Myanmar Protests. More specifically, the advent of social media such as Facebook, Instagram, WhatsApp, and TikTok has made political discussions more discreet and served as an alternative to the traditional “tea shops” in Myanmar. While Myanmar can impose restrictions and curfews to its citizens to stop the use of social media, it cannot in any way prevent the rest of the world from protesting online for the citizens of Myanmar.

The Rise of a (More) Politically-”Woke” and Creative Activists

The Post-Cold War Period also meant the birth of a new generation who grow up under a New World Order, with fewer traditional large-scale armed conflicts, but at the same time a huge set of new non-traditional security concerns and socio-economic issues. The Cold War’s demise did not make things easier for Southeast Asia, the Millennials and Generation Zs were born to a whole plethora of issues different from previous generations, hence allowing them to explore creative and innovative solutions to tackle and solving problems of contemporary society. Just like technology and the new media, art and the language of art has evolved through time, and therefore these younger generations have come up with their own ways to revolt or rise against an entity, institution, or regime in more creative ways. 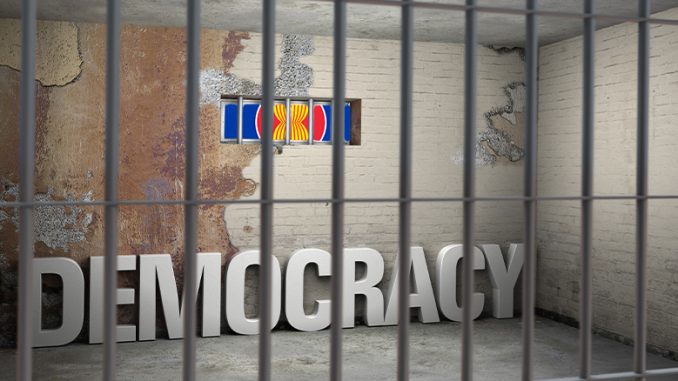 The Changing Character of Democracy

Lastly, how the world defines democracy and how democracy is exercised in the world has changed, and naturally, so too have the ways to respond to concerns about democracy or the lack thereof. In the case of the Southeast Asian region, even if it after it became the norm to partially adopt certain democratic ideals given the states’ membership to the Association of Southeast Asian Nations (ASEAN), it does not mean that there is a single standard or definition of democracy in the region. Moreover, this region has seen states bouncing back and forth from democratic to non-democratic (Myanmar) and given the political instability and socio-economic state of several countries in the region, this phenomenon is most likely to persist in the future. Technology, among other factors, has changed the way democracy works and exercised both by institutions and the people in both positive and negative ways.

Democracy, New Media, and the Future of Creative Activism in Southeast Asia

The motivations and context of the 8888 Uprising and the 2021 Myanmar Protests are similar in some ways, and yet the entire character and emotions surrounding the situation, including how the international community reacts to it, has been quite different. Southeast Asian politics is characterized by a series of rise and falls of democracies in different time periods, and clearly there is no way to compare them altogether. The world is drifting away from a Wilsonian type of democracy, a form of liberal internationalism which set the tone for the 20th Century. Today, the nature of protests and revolutions in Southeast Asia is now facilitated (if not manipulated) by technology more than powerful individuals. It is through this that creative activism and the younger generation will play a key role in Southeast Asia going forward.