The Lao-speaking people of Northeastern Thailand, referred to as Isan, have long been subject to discrimination and exclusion from developmental benefits that accrued to Thailand’s central plains and Bangkok. 1 Indeed, government policy for decades “drained the countryside like conquered provinces” 2 in order to fund the capital and subsidize urban workers. Moreover, strict linguistic requirements in education and the state bureaucracy disadvantage Isan natives. 3 Economically, the Isan region has lagged behind the rest of the country, with higher incidence of poverty as well as high engagement in the informal sector. 4 Politically, Isan has also largely been excluded, with very few Isan natives rising to higher political office; some who did so during the 1940s were murdered by the Thai state. 5 Since that time, relatively few Isan-identified individuals have gained political notoriety, despite making up almost 30 percent of the population. 6 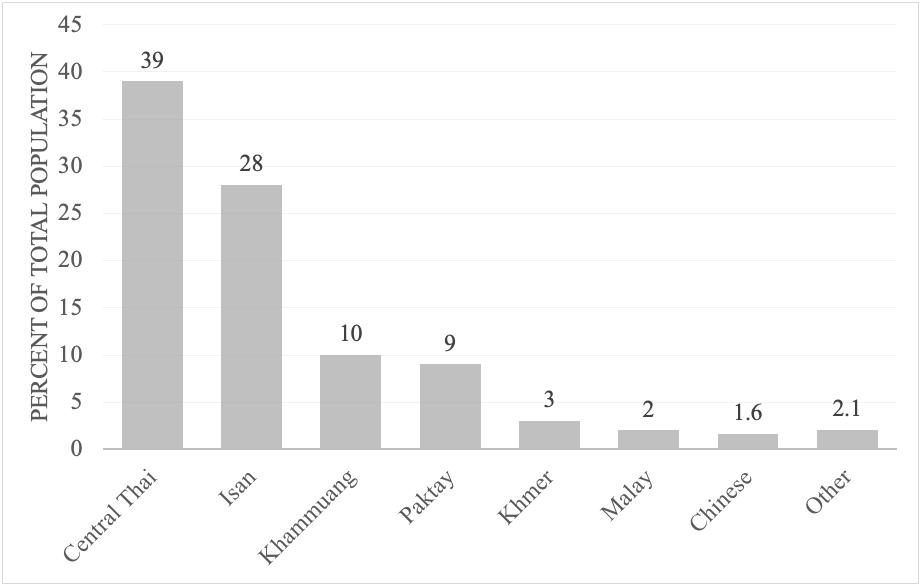 With such exclusion, it would be unsurprising if ethnic mobilization were to take hold. Indeed, it is likely that some sort of regional mobilization would be effective. My own research on the political impact of language has shown that a politician who speaks the local version of Lao, called Phasa Isan, rather than central Thai increases the chances that an Isan person would vote for him by as much as 17 percent. 7 Saowanee Alexander and Duncan McCargo have further found that a regional identity has continued to develop and strengthen, partly based on linguistic differences. 8 Thus the potential for ethnic mobilization exists.

Despite this, ethnic mobilization has failed to take hold on a broad scale. For instance, both the Pheu Thai party and the Red Shirt movement have strong support in the region, but neither organization markets itself as “Isan.” Leadership circles of both organizations remain dominated by Thais from other regions. Prominent Red Shirt leaders Jatuporn Prompan, Nattawut Saikua, and Veerakarn Musikapong hail from the south, while Pheu Thai’s top names in the 2019 election were all based in central Thailand and Bangkok. The long time leaders of the party, the Shinawatra clan, claim Chiang Mai as home, but they are not shy about highlighting their Chinese ancestry and their base in Bangkok. In Thai politics, ethnicity takes a back seat to policy, class, and personalistic appeals.

Why don’t we see a rise in Isan mobilization? I argue that a large part of the answer can be found in the successful integration of the Isan people into the Thai national identity. While ethno-regional identities do motivate some political activity, they can also be subsumed within broader identities, negating their ability to mobilize individuals and groups for political purposes. Recent research indicates that feelings of nationalism can overcome ethnic differences and encourage ethnically distinct people to emphasize national unity over ethnic group benefits. 9 National identities can thus be particularly useful for states to bridge difficult societal cleavages.

The Thai state, at least in reference to the Isan people, has employed over 100 years of integrative ethnic policies aimed to subsume the Lao people of Isan within a broader Thai identity. These policies began under the centralizing reforms of King Chulalongkorn (1868-1910) and continued after the fall of the absolute monarchy in 1932, taking clearest form in education policies, which focused primarily on standardizing the use of the central Thai language throughout the country, making the language a pillar of the Thai identity. Charles Keys has argued that many Isan people, in order to integrate with the market economy, adopted the central Thai language and the Thai identity to enjoy the positive benefits which emerged from identifying as Thai. 10

The question is, then, to what extent these integrative efforts have truly brought the Isan people into the Thai fold, despite the disadvantages and continued exclusion that they face. I investigated this issue using both survey data as well as in-depth interviews with a set of people who identified themselves as Isan. While a more detailed discussion of the results is available elsewhere, 11 I summarize a few findings here.

First, survey data from four different nation-wide surveys supports the claim that Isan people have adopted the Thai national identity. Both the Asian Barometer (AB) 12 and World Values Survey (WVS) 13 have conducted multiple rounds of their surveys in Thailand, including questions related to feelings of national identity as well as identifying the interviewee’s home language. This allows us to compare responses between ethnic populations in Thailand, testing whether or not integration efforts have been successful in convincing Isan people of their “Thai-ness.” If state policies were not effective, then we should see the responses of Isan people are less nationalistic than those of central Thai speakers overall. On the other hand, if such policies were efficacious, we should see Isan people responding at similar levels to their compatriots. 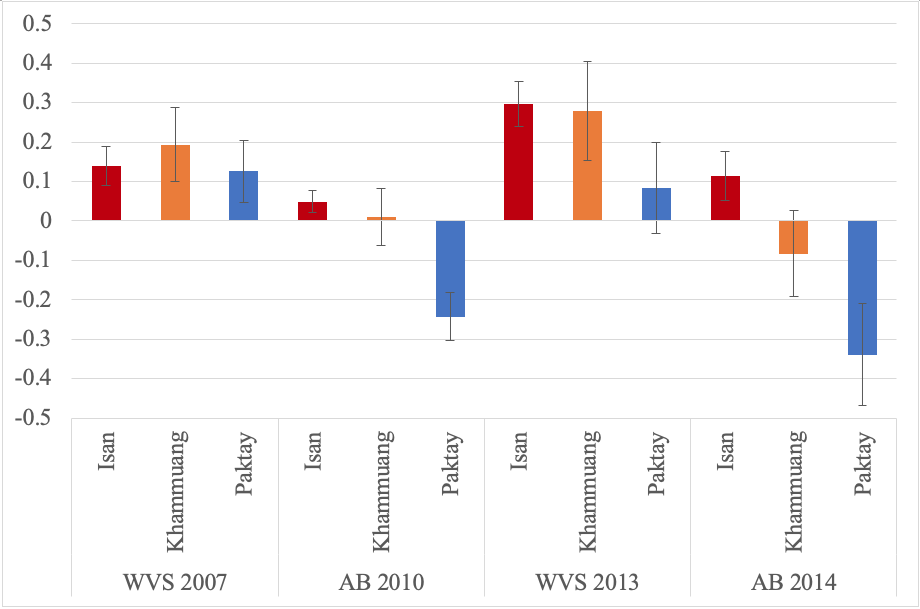 Results show that Isan speaking respondents, as a group, consistently scored higher on feelings of pride in their Thai-ness than their central Thai speaking counterparts. Indeed, these differences were statistically significant in all four survey rounds. In addition, Isan speakers scored their feelings of national identity higher than Paktay speakers in all surveys; there is less consistence in the difference between Isan and Kammuang speakers, though. In other words, survey results suggest that Isan people have embraced the Thai national identity at a higher level than native central Thai speakers and at least as high a level as groups found in Northern and Southern Thailand. 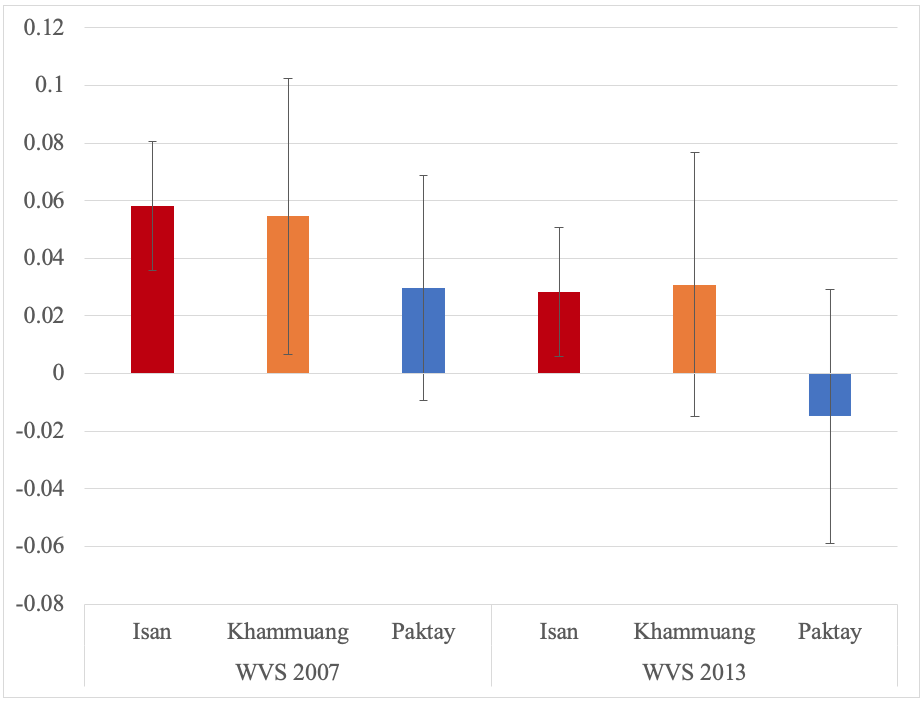 Repeating the same test for respondent scores on their level of agreement with the phrase “I see myself as part of the Thai nation,” again we see that Isan people score more positively than Central Thai speakers (Figure 3). The difference was again positive and significant in both rounds of the World Values Survey. Results for Khammuang and Paktay speakers were less consistent. These findings provide further evidence that the integration efforts of the Thai state have successfully convinced the Isan people native to northeastern Thailand that they are Thai. Indeed, Isan people generally respond more positively to questions of national identity than their counterparts throughout the country.

To gain greater leverage in understanding the degree to which Isan people have espoused the Thai national identity, I conducted a series of semi-structured interviews with Isan speakers from different walks of life. My respondents all expressed pride in their Thai national identity, with a strong emphasis on their “Thai-ness,” best encapsulated by one respondent when asked to compare her Thai and Isan identities: 15

The Lao people of Isan, over a century of integration policies, have become Thai. While they retain a regional identity, they see themselves as naturally fitting within the Thai nation, and they are proud of their identity as Thais.

During further questioning regarding the potential for mobilization based on Isan identity, most respondents felt that mobilizing the ethno-regional identity, especially by speaking Isan, would be a successful political strategy, at least locally. At the national-level, though, many argued against politicians using Isan language. One commented, “It’s not [appropriate]. It shouldn’t happen because there are people in the public who don’t want to hear Isan.” 16 Another stated that, “I would like it, but there’d be bad as well. People would think that he favors the Isan, which wouldn’t be good.” 17 Still another claimed, “the whole country has to accept a politician, and if they are speaking as though they represent Isan, it causes problems.” 18 These responses highlighted the interviewees’ belief that ethno-regional appeals were less important than emphasizing national unity, wherein Isan identity was subsumed within the broader Thai-ness.

A strong sense of Thai nationalism has thus helped reduce pressures for ethno-regional mobilization in Isan. Even though Isan people continue to be disadvantaged both economically and politically, these challenges have not led to the rise of a regional movement or an ethnic party which could encourage greater consolidation of the identity, and it appears that such mobilization is unlikely to occur in the near future, especially with a paranoid military repeatedly intervening in politics and vigorously reinforcing the state-approved national identity.