For his countrymen, the appearance of “Robert Kuok. A Memoir” on bookshelves in late 2018 was a publishing sensation.

The life and fate of Robert Kuok, Malaysia’s richest man, had never been properly told or understood. And that was the way he had wanted to keep it. And so, the surprise was all the greater that the “Sugar King”, one of the many names given him over the years, should suddenly, at the age of 94 allow for his life to be publicly read—and analysed.

Given these circumstances, the telling in his own words of his long life, was certain to disappoint some readers. The myths that had built up around him, and the assumption that he knows more than he is telling, especially where Malaysian and Singapore politics and politicians are concerned, are not gratifyingly confirmed.

The man has been known by name and repeated rumours more than by character. His role in history was only guessed at in general, and known only piecemeal by people who had worked with him. And perhaps that was one major reason for him to have this book written—to still some of the surrounding him and his family.

For those who wish to understand how he could succeed economically to the extent that he has, this book does not disappoint, at least not to the scrupulous reader. Those who wish to see him reveal secrets will not find many juicy secrets to munch upon. I personally find the chapter on his life during and just after the Japanese occupation to be illuminating—of his character and his sense of strategy.

Much is told from memory, it seems, and this creates a flow that makes the reading of this book of 375 pages easy, exciting and very personal. 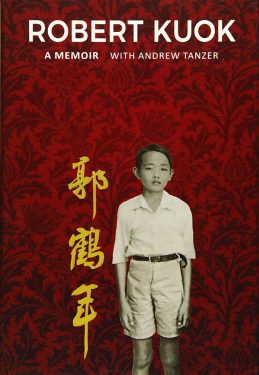 The personal nature of the book hits one immediately. The first line openly states: “My earliest memory is of crying and feeling very heartbroken” (p.21), and the text goes on to reveal the unhappy marriage of Kuok’s parents. After five years married to a gambling, opium-smoking, womanizing and abusing man, Tang Kak Ji left Johor Bahru for Fuzhou. Merely one and a half years old then, Robert came to have deep memories of being “forlorn, abandoned and miserable”, etched into him.

Tan Kak Ji, could not stay away for long though, and returned with her eldest son, Philip, back to Malaya, to her two younger sons. Fully devoted to her three sons, her influence on them went deep and ran strong, and it is clear that Robert’s biography would be dedicated to her. He was proudly and gratefully “Moulded by Mother”, as the first chapter’s title declares.

The second strongest influence on Robert as a young man was his second brother, the second person he dedicates his biography to. William, this “great human being who died too young” (p.5), went into the jungle to fight alongside communist guerillas in the 1950s and became their English-speaking voice on radio broadcasts, saw his end in an ambush at the height of the Emergency in Malaya.

I could not but be reminded of an interview he granted me for a book I wrote several years ago, and of chats with him on several subsequent meetings. As is also obvious in the book, I found him a crisp thinker, and aside from being kind and gracious, he was pithy in his use of English. I remember him once telling me that he did not have the patience to read books that are about things that he already knows much about. He was not one to waste time and energy. He also advised me back then to focus on China, and that economic growth would increasingly be all about China in the coming years.

Those two remarks manifested the final direction that his dynamic life took. As a second-generation Chinese migrant who saw both his ancestral home and his new home occupied by the Japanese, and as a well-educated young man living at the edge of the British colonial world, his sense of place, purpose and practicality seemed to have been sharpened at an early age. To be sure, he belongs to that unique generation of Asians who grew up under British tutelage, crossed the intellectual Rubicon under the Japanese occupation, and participated in the building of a new nation—in his case, Malaysia.

He stayed imbedded in the British legacy in the region—being active, apart from London, mainly in Malaysia, Singapore and Hong Kong, all stops on the route to China. With his investment of time, money and soul into China in later decades, his life signifies more than those of many others the chaos and the vibrancy of the region’s transition, not only from colonialism to nationhood, but also from big power to big power.

For that alone, this book is worth studying. But while it may inspire many on the benefits of capitalism, it should also serve as a warning. As Kuok himself says, “For every successful businessman, there are at least 10,000 bleached skeletons of those who have failed. It’s a very sad commentary on capitalism, but that is capitalism and real capitalism, not crony capitalism” (p.271).