What is Islamic journalism? This is the bold question posed by Janet Steele in her new study of how journalists in Malaysia and Indonesia engage with Islam in their work. Yet rather than assuming from the start that there is necessarily one Islamic journalism, or even that journalism in Muslim societies is necessarily Islamic, Steele shows the complexity and depth of very different kinds of relationships between Islam and journalism.

Steele examines five publications, each of which represents a way of engaging with Islam and journalism –Sabili (Indonesia), Republika (Indonesia), Harakah (Malaysia), Malaysiakini (Malaysia), and Tempo (Indonesia). These span a broad political spectrum, from the right wing Islamist “scripturalists” of Sabili to the Muslim cosmopolitans of Tempo to the generally secular liberal Malaysiakini. The great strength of this book is an approach that is both ethnographic and historical. Steele has spent a great deal of time in the field, and her arguments are based on extensive interviews, her own observations, as well as textual and historical analysis. Each case is situated within the recent historical development of both journalism and Islam in Malaysia and Indonesia. Another strong point is the comparative element, both between publications and between Malaysia and Indonesia, allowing Steele to show how different relationships between Islam and the state in the two countries have had very different consequences for how journalism is practiced, how journalists think and write about Islam, and how journalists interact with each other at publications where the personnel are religiously diverse such as Malaysiakini or Tempo.

Steele argues that journalism is not necessarily secular, that there are ways to practice journalistic integrity outside of the conventional Western framework in which the press is understood as a defender of the people against the power of the state. The classic elements of journalism in the West, such as striving to find the truth, providing balanced coverage, verifying information, and independence from power can in fact be found in explicitly Muslim media such as Republika or Harakah. But as Steele shows, even at publications like Tempo or Malaysiakini, which are not explicitly guided by Islam, many Southeast Asian Muslim journalists feel there is a relationship between their faith and their journalistic work, and they say they draw on Islamic teachings such as justice or the concepts of isnad (meaning, to check the reliability of a Hadith) and tabayyun (verification) to justify their journalistic principles. As Steele points out, “it is possible to justify journalists’ critical attitudes and skepticism toward the truth of their own opinions either with liberal theory and the words of John Locke or with tabayyun. The principal is the same; it’s the road that’s different.” (89) 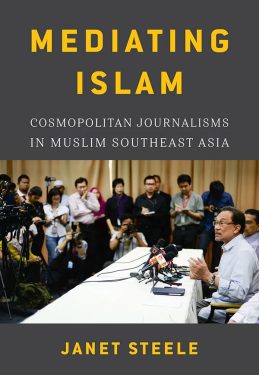 Perhaps the most fascinating chapter is that on Sabili, the controversial Indonesian magazine founded in 1984. Sabili represented the re-emergence of Islamism in Indonesia after a long period of quietism. It grew along with the underground Islamist student movement, providing a critique of the Suharto regime and covering the Tanjung Priok Incident, in which the Indonesian military fired on unarmed Muslim protestors in Jakarta. It was shut down by the regime in 1993 and returned to publishing in 1998, during reformasi. It finally went out of business and ceased publishing in 2013. Steele writes that after 1998, the magazine was particularly focused on five issues: apostasy, Christianization, deviant sects, critiquing liberal Islam, and the Israeli-Palestinian conflict. As she notes, “In truth, Sabili appeared obsessed with these topics, devoting page after page to the ways in which its enemies allegedly sought to undermine Islam. The perpetrators? Zionists, the West, and liberals, and Sabili carefully documented their methods.” (30)

Steele says that there was always an essential tension within the editorial group of Sabili in that journalists had to be both committed to journalism and to a very particular scripturalist version of Islam. After democratization, with the state no longer a central enemy and political shifts underway in the Indonesian Islamist movement, Sabili struggled to find its footing. She quotes former editors acknowledging that there were problems with quality control, but also arguing against the idea of balance in journalism, pointing out that most publications take sides. They saw themselves as providing dissenting opinions that would not be heard otherwise. Steele suggests that Sabili’s uncompromising Islamist approach led to its demise, especially once other parts of the Islamist movement such as the Prosperous Justice Party moderated their stances.

Including Sabili in this book is worthwhile, as it provides a riveting and useful comparison with other Muslim publications such as Republika and Harakah. Yet those publications are far more committed to journalistic ideals, whereas, having seen the explicitly hateful and strongly ideological content of Sabili in the 2000s, I am not convinced that it can be considered journalism or even “advocacy journalism.” Rather, I would argue that it represents a form of current events opinion writing along the lines of the US websites Breitbart or InfoWars. Ironically, Sabili predated the increasing popularity of such writing. Perhaps the real issue here is how journalism is defined.

The chapter on Malaysia’s Harakah is also very significant for its in-depth examination of a newspaper controlled by an opposition political party (PAS – the Pan-Malaysian Islamic Party), and how editors and journalists navigate this situation. These journalists must not only integrate Islam and journalism, but also keep in mind the interests of a political party that over time has become increasingly divided. They are committed both to freedom of expression and an Islamic state. Yet as Steele shows, over the years, the Harakah journalists strive to balance these commitments, retaining their skepticism and ability to be critical. Nevertheless, by 2015 the situation comes to a head as conservatives take the helm of PAS and progressives split off to form a new party. While Harakah has apparently survived, many of its best journalists departed for other publications. Perhaps such is the inevitable fate of a newspaper so closely tied to a political party.

Steele’s study is well situated within the literature on Islam and politics in Southeast Asia. It provides an important corrective not only to simplistic assumptions that Islam cannot allow for free expression, balance, or critique but also to superficial understandings of how religious values shape people’s public activities.

Reviewed by Rachel Rinaldo
Rachel Rinaldo is an assistant professor of sociology at the University of Colorado Boulder.