There is a picture inside the back cover of the book where the author, Jonathan Miller, looking sheepish and properly chastened, has a selfie with a cardboard cut-out of President Rodrigo Roa Duterte. Indeed, he was one of the journalists who experienced Duterte’s perorations at first hand having been at the receiving end of a particularly juicy, “Putang ina mo!” (“you son of a whore”) insult from the Philippine president himself at one midnight press conference when he confronted the president with an uncomfortable question on death squads.

Miller’s journalistic credo, stated near the beginning of the book, is admirable. He writes,

I have an aversion to western foreign correspondents ‘parachuting’ into countries and pontificating sagely about what they think is going on. That is why this book is drawn almost entirely from what Filipinos have told me about what they think is happening in their country. I have listened to Duterte’s critics and to members of his family, to ministers in his cabinet, and to other loyal supporters, including priests, civil servants, newspaper editors, and close associates. (11)

The book fittingly starts with a capsule account of Duterte’s electoral victory and the immediate and bloody aftermath in the war on drugs. This is followed by a chapter which tries to reconstruct Duterte’s childhood and youth by means of interviews with his close friends, relatives and contemporaries. Miller correctly observes that as the son of the lawyer Vicente Duterte, the governor of Davao, “Duterte was probably the most privileged teenager in Mindanao; a spoiled brat, in many ways” (34). Miller shares anecdotes about Duterte’s childhood, rebellious teenage years and early adulthood which could easily be subjected to dime store “psychologizing” by those looking for antecedents and explanations for his present conduct. Departing from the not so idyllic picture album of a youthful gangster to be, the book’s pace picks up as Miller moves to the next chapter on Duterte’s fraught relationship with the media which heated up especially when police atrocities and some clumsy operations by dirty cops periodically blew the cover open on his drug war. Miller’s account then shifts to collecting heart-rending interviews with marginalized victims of the unrelenting drug war which has taken a brutal toll on young children and the poorest of the poor. This is one of the most powerful parts in this book. Miller wrote about some of the places most visited by violent and unexplained deaths,

The first time I ventured out with my Channel 4 News crew to film on the front line of Duterte’s drugs war, we joined police on Operation Tokhang in Tondo slum in Manila, reputedly the biggest and most dangerous in the Philippines, where drugs were rife, and murder, rape, and domestic violence endemic. In three decades of reporting from some of the poorest places on the planet, I had rarely seen such depressing poverty as this; a crush of humanity living on top of each other in broken, teetering shanty-shacks above filthy streets laced with tangled wires and strewn with stinking piles of rubbish. The particular area we were in was called ‘Happyland’. (135) 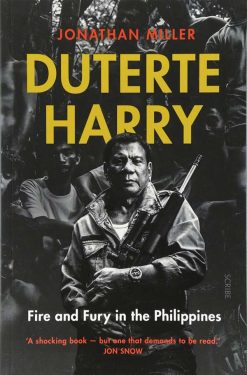 Miller then presents some morbidly engrossing chapters on Duterte’s notoriety with women and penchant for tasteless rape jokes, followed by another one on the pattern of his cursing and violent insults. The author accurately describes the so-called “Dutertisms” as the “President’s unique and often incomprehensible mangle of Taglish and Bisaya, which he combines with frequent malapropisms, unfinished sentences, inaudible mumblings, and quirky, rarely used words” (139). Miller then demonstrates that the city of Davao as “Exhibit A” of the benefits and advantages of Duterte’s brand of leadership is just not what it is cracked up to be. In truth, Davao is not one of the “safest cities” in Asia. It was and perhaps still is the “murder capital” of the Philippines as well as having the second highest incidence of rape.

The next two chapters devoted to Miller’s dogged investigation into the Davao Death Squad (DDS) with interviews from one of its main operators, retired Davao cop Arturo Lascañas, and a trusted henchman, Edgar Matobato, are positively hair-raising. The inhumanity they admit to have inflicted on their numerous victims is almost beyond belief. Winding down towards the end of the book, Miller describes the opaque mechanics behind Duterte’s so-called “Narco list” and segues to a chapter on the web of disinformation, alternative facts and fake news upon which the drug war has been built. Miller spends some time discussing an anonymous document of dubious provenance said to be written by a “retired police intelligence officer” entitled, “Special Report: The State-Sponsored Extra Judicial Killings” which purports to show that the “bloody purges” under Duterte were the work of the grassroots organs of the Communist Party of the Philippines (CPP) (276). Miller does admit that some of the “trusted sources” he showed it to, “felt its credibility was undermined by what they considered over-stated or even fanciful assertions about just how close the links were” between Duterte and the CPP. Miller himself had even written, much earlier in the book, that “Duterte’s political enemies…  were already hard at work trying to convince the army brass that their new commander-in-chief was a communist plant, a mole inside Malacañang itself” (66). But in the end, throwing caution to the wind, Miller suddenly claims that “most of the contacts I shared the document with thought it credible” and that Reuters had “confirmed its authenticity with two senior officials” (276). Current developments can only make one sceptical about such claims. The book ends with some sobering reflections on how Duterte, a President who has no qualms about threatening the imposition of Martial Law on a whim, has seemingly been able to get away with murder and face no public consequences.

There is some patchiness in Miller’s historical knowledge of the Philippines, especially of the Philippine Revolution against Spain where he seems to think that only the Americans had any decisive role. But this, admittedly, is not really a big deal in a work such as this which does not claim historical depth. However, his comparison of the dissimulating former foreign Secretary Perfecto Yasay with Tariq Aziz, Saddam Hussein’s spokesperson, is unfair to the latter, who probably spoke more truthfully than former US President George W. Bush on the so-called weapons of mass destruction in Iraq. Furthermore, Miller’s claim that “Dutertismo” was “coined in homage to Venezuela’s Chavismo” scores some cheap points against Hugo Chavez for the Western media establishment but is most likely an incorrect explanation since “-ismos” are just run-of-the-mill in the Philippines.

In conclusion, some fundamental insights about Duterte can be gleaned from some of Miller’s interviews with Duterte’s long-term rivals and observers. For example, Duterte’s decades-long political foe, Prospero ‘Boy’ Nograles, a former speaker of Congress, remarked that, “People underestimate him. I used to, but I have learned my lesson”… “He loves to be underestimated. That is his trick” (143). It is clear by now that one underestimates Duterte only to one’s own grief. Finally, Miller shares one seasoned observer’s take on Duterte, “He’s just a master-manipulator, an instinctive politician, capable of saying anything that suits him and capable of turning on anyone. He will make friends with those that he finds useful, only to later turn round and crush them. He has no qualms about biting the hand that feeds him. Everything centres on him. It’s all about control” (297). However, it is important to keep in mind that, Duterte, as masterful as he is at political manipulation, is just as beholden as all previous Philippine presidents have been to the balance of political and economic forces both on the level of the nation and on a geopolitical scale. Any Philippine president, even Duterte, would forget this at his or her own peril.