A striking aspect of reporting on the Central Intelligence Agency’s (CIA) “black site” in Thailand was Human Rights Watch researcher Sunai Phasuk’s comment that Thai military and police had adopted the black site’s torture techniques: “We had never heard of waterboarding before – it was only after 2004 or 2005 that it’s been used here” (Los Angeles Times, April 22, 2018). This is not the first time that US operations have had important “legacies” for Thailand. The Cold War alliance between the US and Thailand has had far-reaching impacts on Thailand’s politics and its political institutions.

The Cold War alliance was established in a context of multiple political struggles that reflected the developing contestation of the Cold War. In Thailand, deep engagement with the US interweaved with domestic political battles between the promoters of the 1932 Revolution and their royalist opponents.

It was Darling (1965, 104-105) who observed that all post-World War 2 US ambassadors to Thailand were ardent anti-communists, while asserting they “had nothing but good intentions in attempting to help the government and people, and in stressing what they felt was a serious threat to the nation’s security.” CIA and State Department documents of the time show that what defined “good intentions” was that Thailand be a stable Cold War ally in the fight against “Communist aggression.”

Three inter-related aspects of the US–Thailand Cold War relationship illustrate how “good intentions” were operationalized as support for military authoritarianism. This support for a stable military regime was built on the upending of the US’s earlier alliance with Pridi Phanomyong and the political annihilation of his Free Thai supporters. In this process, the US and the military regime in Bangkok also defined the northeastern region – a bastion of support for Pridi and his Free Thai – as a dangerous, irredentist haven for Communists. Each of these interventions has had profound implications for Thailand’s politics.

Pridi: From Ally to Enemy

During World War 2, Pridi, a prominent legal scholar, architect of the 1932 overthrow of the absolute monarchy, leader of the Free Thai underground and Regent, was the US’s most reliable ally in Thailand. In 1946, the US rewarded his support with the Medal of Freedom. Yet doubts had emerged about Pridi’s socialism, economic nationalism and radical anti-colonialism (Thanet 1987; Goscha 1999).

Thailand’s royalists eagerly stoked such uncertainties. With long-standing grievances against Pridi, they repeatedly declared him a republican and “Bolshevik.” While the Americans initially dismissed royalist scheming, reports by the Office of Strategic Services (OSS), then CIA, increasingly drew on royalist narratives and “intelligence” to question Pridi’s ideology. In the raucous politics over the unexplained 1946 death of King Ananda Mahidol and during the run-up to the 1947 coup that ousted Pridi’s government, intelligence reports linking the Free Thai with Communists proliferated. As Fineman (1997, 36) has shown, the Americans effectively gave the coup makers the green light to “overthrow Pridi’s elected government with impunity.” Accused by royalists of involvement with the king’s death, and an enemy of the regime and US for his failed 1949 counter-coup, Pridi fled into lifelong exile.

Following the 1947 putsch, Thailand’s new military leaders confirmed to the US Embassy that it was against republicans and Communists – code for Pridi and the Free Thai. A CIA report (1948a) vilified Pridi “as a Communist conspiring to overthrow the present government.” US support for the coup reflected its craving for political stability in Thailand and its decision that there was no democratic antidote to Communist advances in Thailand and Southeast Asia. Such views permitted an alliance was with a thuggish military regime.

By late 1949, with Pridi exiled in China, CIA reports repeatedly linked him with Chinese Communism and efforts to topple the Phibun regime. A single report linked Pridi with an invasion plan, sabotage operations, a Communist headquarters in the northeast, and destabilizing Phibun’s government with Beijing’s support (CIA 1950).

What does Pridi’s American journey from ally to Communist threat mean for Thailand’s politics? Of course, Pridi’s own politicking contributed to his downfall; his opponents out-maneuvered him. Yet American abandonment of Pridi represented a significant political triumph for royalists. While Phibun was also an anti-royalist, he and royalists united to eradicate the civilian and democratic alternative Pridi’s political movement provided.

Pridi’s political destruction meant that, by the late 1940s, Thailand’s principal opponent of military domination had been considerably weakened. This suited the US. Dumping its wartime ally prepared the political ground for reinvigoration of royalist politicians and the monarchy as a powerful political institution. The US’s gain was a stable military regime as an ally and a mainland Southeast Asian base for Cold War operations.

Threat from the Northeast

In seeking to oust Pridi’s Free Thai supporters, the regime and US linked them with Communism – a connection that played well with Americans. Official US documents and policies piled high linking Pridi, the Free Thai and opposition politicians to the Communism of the Viet Minh and Vietnamese political refugees in the northeast.

At the end of the War, Thai support for the Viet Minh, including in arms-trading, was widely known. Indeed, anti-colonialism and disdain for the French meant that this support crossed political divisions. As Goscha (1999) has shown, Pridi, the Free Thai and northeastern politicians, including Tieng Sirikhan and Thong-in Phuriphat, were key Viet Minh contacts.

When Phibun seized control, the Viet Minh recognized that, while anti-French, he was also anti-Communist (Goscha 1999, ch 7). Meanwhile, the Americans had redefined the Viet Minh from nationalists to Communists and supported the French. Intelligence reports of money and arms funneled to the Viet Minh from Thailand were tagged with references to Pridi and his allies (CIA 1948b). Several reports conveyed unverified claims, probably sourced from regime and royalist informants, of large Viet Minh training camps in the northeast and of local students – described as disgruntled separatists – being recruited for indoctrination and military training in China and Vietnam (CIA 1949a, b). The result was a determination that military assistance was needed to defeat the Viet Minh-inspired movements and to strengthen the regime against its domestic political opponents. 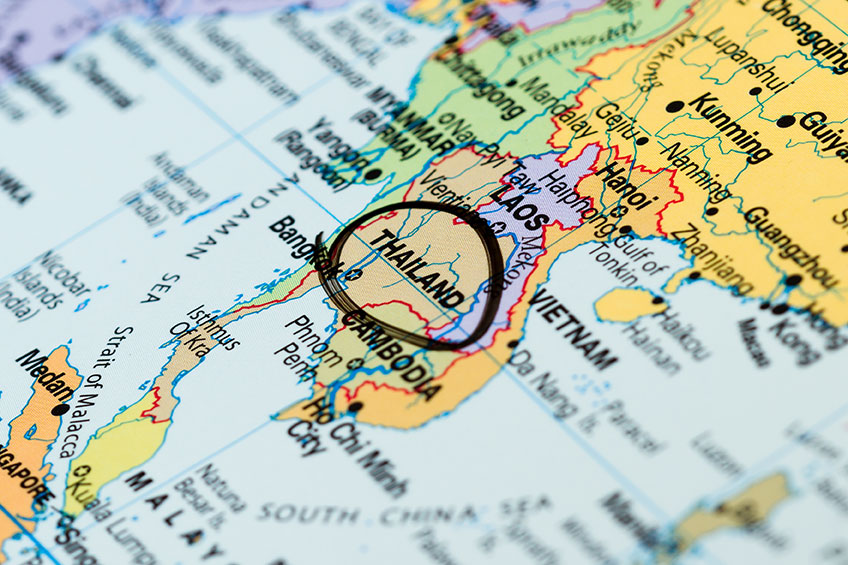 While the focus of CIA reports shifted to fears of invasion from Vietnam or China, the military regime moved to eliminate pro-Pridi politicians. Official US discourse concurred, identifying the northeast as a hotbed of pro-Pridi Communism and irredentism. Pridi’s supporters were harshly dealt with. Following the 1947 coup, several were arrested and accused of a separatist plot; others went into hiding (Keyes 2014). After the failed 1949 counter-coup, the state assassinated several leaders and incarcerated others. Most notoriously, the regime’s police summarily murdered four ex-ministers from the northeast while in custody. The Americans knew that General Phao Sriyanond ordered the assassinations and that Phibun and several ministers knew of the plan (CIA 1949c). Yet the US deemed this brutality necessary for ensuring regime stability and strengthening anti-Communism.

But even after this repression, Pridi and the Free Thai were still seen as a threat to the regime. The US increasingly viewed the whole northeast, where Pridi maintained strong support, as a “problem.” Attention shifted to psychological operations to “reduce the danger of dissidence in the Northeast.” Proposed military and economic assistance focused on roads and railways for the “development of the strategically exposed, economically depressed Northeastern provinces” (Morgan 1953). These efforts involved US military programs aimed at defeating what OSS founder and new ambassador to Thailand, “Wild Bill” Donovan, called “Commie agents … operating [in] North and Northeast Thailand” (OH 1987). Donovan pushed for strategic roads, US air bases in the region and more attention to counterinsurgency (Operations Coordinating Board 1954a).

The murder of pro-Pridi politicians and the definition of the northeast as a site of opposition and Communism had long-lasting repercussions, not least because it marked the region as an irredentist threat and its people as backward, scheming and dangerous for the Bangkok political elite (Keyes 2014). For many locals, the decimation of their political leaders confirmed Bangkok’s antagonism and discrimination against them and contributed to ideas about regional identity.

As the USA ditched Pridi, it embraced military authoritarianism. The US justified this move as necessary for establishing a stable regime that could resist Communism and defeat local dissidents.

The build-up of military assistance to Thailand is well-known (Surachart 1988). As reports of Communist activity fed back to Washington, the US worked to strengthen the military as a strategic bulwark against “Soviet and Chinese encroachment” (OH 1976). A degree of panic set in with the outbreak of the Korean War and calls for military aid grew louder, with an assistance agreement signed in October 1950. Aid soon flowed like a river in flood, with US Ambassador Stanton warning that Communist subversion threatened the Thai Government (OH 1977); proposed military assistance increased tenfold between 1952 and 1954, to $124.1 million (Halaby 1950).

In 1953, a military mission to Thailand led by General William N. Gillmore concluded that still more needed to be done, recommending additional training and advisors and a doubling of Thai military strength to 120,000. The police force was increased by 5,000, to 42,000. In addition, training began for a new Volunteer Defense Corps, also scheduled to expand to 120,000 (OH 1987).

US assistance reshaped the armed forces and police. It also fashioned the military as a dominant political institution. As Darling (1965, 67) expressed it, for the Americans, a “conservative and anti-Communist regime in Thailand became increasingly attractive regardless of its internal politics or methods of achieving power.” General Gillmore was more candid, declaring: “So while … we are assisting a ruthless military oligarchy maintain its position, we can be reasonably assured of its will to resist Communism” (OH 1987). Not even massive graft deterred the US, with one report concluding it could not be eliminated (Morgan 1953). Indeed, graft was the cement binding the regime’s generals: “These are men who have risen to high position by graft, by ruthless brutality and by cooperative support of one another” (OH 1987).

The Cold War alliance between the US and Thailand meant supporting military authoritarianism and political repression, and crippled civilian politics. The destruction of Pridi and his allies suited his royalist and military opponents. It also came to suit the US. This move prepared the ground for the revival of royalist politicians and the later rise of King Bhumibol Adulyadej as a political participant (see Handley 2006). Repression, arrests and murders neutered progressive civilian politics, most especially in the northeast. Not only were articulate and popular critics of royalists and the military destroyed, but the northeast was defined as politically “dangerous” and irredentist. This conception continues to motivate the relationship between the northeast and the Bangkok’s elites. Most significantly, US Cold War strategy emasculated democratic politics by supporting, bolstering, arming and ideologically cheering stable authoritarian regimes. Since the Cold War, the military has repeatedly overthrown elected governments, most recently in 2014.