For decades, journalists and scholars treated the Thai monarchy with a light touch. Some avoided the topic altogether. Others unconsciously (or not) reinforced the tropes that sustained it. While a small number pulled at the seams of the institution, few attempted to understand how it shaped national life.

The 2006 publication of The King Never Smiles and the palace-backed coup against popular telecommunications billionaire Prime Minister Thaksin Shinawatra in the same year made the silence unsustainable. Yet discussion of the monarchy remains a challenge – not least because of Thailand’s harsh lèse-majesté law that prohibits criticism of the king.

This dynamic has resulted in new types of academic polarization. Many exiled scholars, Thai or not, now speak freely at great personal expense. Those based in Thailand, seek further access or fear for the safety of relatives are compromised. In this fraught intellectual climate, some argue that excessive attention on the activities of individual royals has obscured the social and political processes that made royal pre-eminence possible.

Ünaldi is one such critic and his book is an attempt to understand how the monarchy achieved such immense power during the second half of the twentieth century. Borrowing from Ian Kershaw’s study of Nazi Germany, Ünaldi argues that distinct groups helped boost King Bhumibol’s charismatic power. By remaining aloof from day-to-day decision-making, King Bhumibol relied on others to interpret his directions. Ambitious elites thus ‘worked towards’ the monarchy to gain favour within high society networks, leading to ever-greater levels of social – and by extension actual – capital

In two meticulously researched chapters in the second half of the book, ‘The Politics of Space I’, and ‘The Politics of Space II’, Ünaldi demonstrates this process and its impact. His focus is the area around Siam-Ratchaprasong in central Bangkok, which he interprets as a physical reproduction of the social relations that shaped the Ninth Reign. Dealing with the construction of the Siam Intercontinental, completed in 1966, and the exclusive Siam Paragon department store that replaced it in the early 2000s, the first of these chapters demonstrates how architects, planners and investors all worked toward the monarchy. In so doing, they transformed the area  owned by the Crown Property Bureau – into an apex of both royal and commercial power.

In the second of these chapters, Ünaldi takes the reader into nearby slums that, also built on royal land, serve as physical reminders of the contradictions of royal-endorsed capitalism. Bristling with archival detail, rich in ethnographic data and incisive observations, these two chapters culminate with in the story of the shocking anti-monarchy graffiti left scrawled across the area following the red-shirt protests of 2010. This stunning reveal forms the culmination of Ünaldi’s argument: that the desecration of the Siam-Ratchaprasong area following the violent dispersal of the red shirt crowds marked a point of no return for the country. ‘The blood, the ashes, the empty streets left no doubt: Thailand would not be the same again.’ 1

The first part of Ünaldi’s text seeks to introduce the underlying developments that produced this extraordinary moment. Here he relies on a sophisticated, if largely uncritical, reading of Max Weber’s writing on charisma – close enough for Ünaldi to the Thai notion of barami to be directly relevant. Charisma, Ünaldi argues, is accrued particularly well through periods of political and economic transformation, and is thus directly relevant to how and why King Bhumibol became so central to the Thai social order from the middle of the twentieth century. It also explains why Thaksin was such a threat.

In a pivotal second chapter, ‘A tale of two gods’, Ünaldi demonstrates how rather than ‘latching-on’ to the barami of the king, Thaksin sought to build his own reservoir of merit. 2 By usurping royal prerogatives, Thaksin attempted to place himself at the centre of Thailand’s future. Crucially, he used both his vast fortune and electoral politics to achieve this standing: harnessing the aspirations of the rural majority and building up his barami by delivering on his promises.

The danger posed by Thaksin to the establishment, therefore, was that his barami was the product of modernising forces secured by exploiting both the contradictions of royal-endorsed capitalism and the political system that emerged from the 1997 economic crisis. 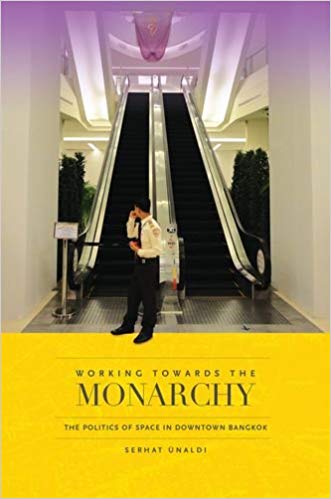 It is about here that I depart from Ünaldi’s analysis. In my view, the strength of this book is the way it pieces together how economic activity, political power and the religious-social order were reproduced in Bangkok’s built environment. The rigorous application of Weber, however, leads to an awkward destination: forcing unnecessary distinctions between the secular and the religious, and fixing vast swathes of rural Thailand on a teleological path from primitive to rational.

Thus, Ünaldi writes, it ‘is likely that people’s reorientation from salvation in the next life to fulfilment in the present will, in due course, stimulate a devolution of power from the old guardians of oppressive religious morality to the heralds of economic progress and material success.’ 3

Ultimately, and at its heart, this is a study about how the Thai elite successfully navigated the expansion of capitalism while embracing existing cosmologies. Where Ünaldi embraces his exceptional and original material, the book serves as an important antidote to the primitivist categories of previous eras – many of which have proliferated in more recent discussions about Thailand: despotic rulers, emancipated peasants, simplistic religious identities etc. collapse upon close scrutiny and are, in this instance, replaced by the multi-layered world encapsulated by Siam-Ratchaprasong. The awkwardness comes with the attempt to reconcile these exquisitely detailed complexities with a singular line of analysis developed in the early twentieth century.