This book, based on the author’s doctoral thesis at Cornell University, is a history of sugar planting in Negros, a Visayan island in the Philippine archipelago. The author, who is from the Philippines and until recently taught in Australia, identifies himself as a Roman Catholic, but offers a balanced, often critical, account of the historical forces, including the Roman Catholic Church in Spain, that have shaped power relations and hegemonic formations on the island.

Aguilar’s book is a wide-ranging study of the rise of sugar haciendas and the sugar-planter class from the Spanish through the American colonial periods. It is rich in detail that ranges from the anecdotal to the statistical, derived from archival materials in the Philippines, Spain, the United States, and the United Kingdom; from published scholarship; and from fieldwork involving key-informant interviews, observation of rituals, and documentation of folklore. The analysis is in two parts: the first a reconstruction of the history of the Visayan Islands under Spanish colonial rule from the late sixteenth century to 1855, when the sugar economy was established; and the second an eclectic and complex account of power and hegemonic formations surrounding the sugar-planter class since 1855. The rich material is organized around the author’s well-defined theoretical positions: that the social structure is essentially fluid; that political economy is intrinsically and dialectically intertwined with culture; and that the relationship between structure and agent is mutually determining and dialectical. 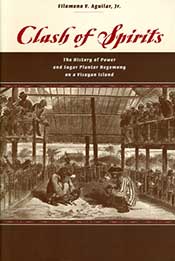 We read about indigenous indios, Chinese, Chinese mestizos, waves of Augustinian and then Franciscan friars, foreign merchants, and representatives of the colonial state, all intermingling in a complex society that cannot be straightforwardly explained in terms of simple power relations. In different situations and historical circumstances, each social category possesses and utilizes varying levels of economic, social, cultural, and symbolic capital. The study examines the transformation and shifting fortunes of each social category over time and in response to external circumstances. The mestizo sugar-planter class, for example, appears quite weak in relation to a scarce indio labor force under the “neutral” Spanish colonials, but during American colonialism becomes a powerful socio-economic force whose dominance is later subject to the influx of foreign capital and technology.

Aguilar employs the cockfight, a prominent feature in local cultural practice, as a dominant metaphor to shed light on fluid developments in the socio-economic structure. Around the cockpit, gamblers play a skilled and calculated game of manoeuvre, casting their bets on cocks that have, notionally, an equal chance of winning, but whose “inner strength” – that differentiating winners from losers – only a skillful gambler can detect. Social relations were similarly ambivalent, the site of complex and risky negotiations and manoeuvre. Individuals and classes that gambled skillfully rose in prestige and power, but could just as easily fall into decline as a result of misfortune or bad judgement.

Aguilar also explores the dialectical connections between myths and folk histories on the one hand and developments in social, economic, and political structure on the other. Indio shamans such as “Papa” Isio, whose grotesque imitation of Catholic signs and ritual was an effective mode of anti-colonial resistance, had supernatural powers that commanded the following of large numbers of indio plantation laborers who had broken their debt obligations to mestizo sugar-planters. Fantastic stories were spun around prominent mestizo leaders such as Juan Araneta, who communed with a powerful preternatural spirit, was invincible to bullets, and boldly committed acts sacrilegious to Catholicism. This story relates quite clearly to the celebration of anti-colonial heroism and the anti-Catholicism of Masonic capitalism that was on the rise. We read about Kanlaon, a volcano that is really an enchanted city with a centrifugal mill producing sugar for “America” and manned by engkantos or golden-haired, blue-eyed spirits of fair complexion.

Aguilar’s study is an ambitious and original attempt to reconstruct an important component of Philippine history, explaining historical dynamics in terms of local culture as a simultaneously determining and determined site of power and hegemony. Aguilar brings together a wide range of existing scholarship on Philippine history and anthropology, which he uses with concepts from cultural theory to analyze, often very convincingly, his own material obtained from archives and fieldwork. His writing is always clear and often vivid. Only its broad coverage may make it difficult for the reader to follow the central lines of argument. Strategically placed summary paragraphs and a concluding summary would not only help orient readers (as would a glossary of non-English terms), but would also integrate the material more effectively. On the other hand, this colorful and engaging book has many interesting accounts that make it accessible to a non-academic reader. Students would find in this book useful historical and ethnographic material illustrating the complex processes of negotiation under weaker forms of hegemony.

Kenneth Paul Andrew Sze-Sian Ta
The author is an assistant professor in the University Scholars Programme at the National University of Singapore. He is interested in social, cultural, and political theory and can be contacted at usptank@nus.edu.sg.