On Friday 13th January 2015, thousands gathered at the Pulau Melaka Mosque to pay their last respects for Tok Guru Nik Aziz Nik Mat. The Parti Islam Se-Malaysia (PAS) spiritual leader, who was also Kelantan Chief Minister from 1990 to 2013, died at the age of 84. His death was a blow to Malaysia’s opposition coalition Pakatan Rakyat (PR), especially when it came two days after the Federal Court upheld the five years jail sentence for Anwar Ibrahim. With the decision, Anwar would be out of politics for 10 years, because Malaysian election law states that a person convicted of a jail sentence of more than one year or fined RM2000 cannot run for political office for five years after that person’s release. Many political observers believed that Nik Aziz’s death, along with Anwar’s imprisonment, would potentially cripple PR. 1 To be sure, since 2008, Nik Aziz was instrumental in keeping PAS in PR; he rejected any form of unity talks with UMNO unless the government accepts PAS’ brand of Islam. His distrust for UMNO leaders began in the 1970s, when PAS was part of BN coalition. He regarded UMNO as betraying the Islamic cause by making PAS a junior partner in the coalition. In the 1980s, Nik Aziz was a member of the Young Turks which revolutionized PAS. In 1990, he led the party in capturing Kelantan and became its Chief Minister. Throughout his rule he popularized the slogans kepimpinan ulama (leadership of religious scholars) and membangun bersama Islam (development through Islam).

Nik Aziz political leadership was not free from controversy. He was a staunch proponent of hudud laws (Islamic criminal laws) and Islamic state. In 1993, the Kelantan legislative assembly under his government passed the Shariah Criminal Code (II) bill. The bill includes several punishments under hudud offences, such as stoning to death, whipping, and amputation. Defending his decision for hudud laws, Nik Aziz once said, “PAS only existed for 51 years. Hudud laws are in the Quran for more than 1400 years. PAS did not create it! Until today UMNO has not dared to implement hudud. It only considered hudud as PAS’s interpretation, but where is UMNO’s interpretation?” 2 In 2002, UMNO politicians accused Nik Aziz as sacrilegious for labeling God a “Samseng” (thug). Although Nik Aziz used the analogy to demonstrate God’s omnipotence, many Muslims regarded his comparison “insensitive”. Moreover, his remarks on women’s role in society riled many rights groups. In 2000, Nik Aziz declared that scantily-dressed women invite rape and cause many social ills. In 2003, he pronounced that Muslim women should not wear lipstick outside their homes because it could arouse men. 3 He warned that rape victims have only themselves to blame for dressing “inappropriately”. 4 Nik Aziz later claimed his words were taken out of context.

Despite his conservative religious outlook, Nik Aziz has revolutionized Malaysian politics through his personal touch. He conducted “blusukkan” (meeting with people on a day-to-day basis), even before Indonesia’s President Joko Widodo popularized it. Yet different from Jokowi, Nik Aziz never wished for the media limelight. Though a chief minister, he shunned big mansions and extravagant cars. In 2013, I had the chance to interview Nik Aziz for my doctoral research and witnessed his simple habits. I was the first to arrive at his office one morning for the interview, it was the time he was scheduled to meet a businessman. Nevertheless, he allowed me to meet him first because I came earlier.

Nik Aziz’s death is a huge loss for PR, but not only because it has lost its key leader. Inconsistencies in his thinking led to various interpretations on where PAS should stand in PR. Undeniably, Nik Aziz’s thinking and ideals define the party, just as how Mahathir’s continue to influence UMNO. Nik Aziz received a “cult” status by PAS members and some Malaysians. To date, many books have been published to document Nik Aziz’s religious and political ideas. To his followers, Nik Aziz generated a whole school of thought. Unsurprisingly, many graduate students and researchers have delved into his thinking, thought-styles, and philosophy. The greatest irony for Nik Aziz is that on the one hand, he advocated for hudud laws, but on the other, wanted PAS to stay in PR at all cost, even though the DAP (Democratic Action Party), a component party in PR, rejected hudud.

Thus, the question for PAS members now is: what did Nik Aziz stand for? Hudud and PR seem a mismatch for the time being. It would be difficult for PAS leaders to convince conservative members to remain in PR if the coalition continues to reject hudud. On the flipside, some members would reject any move for PAS to join UMNO, because it is also considered to be going against Nik Aziz’s wishes. PAS’s struggle now pivots on two factors. First, to what extent can the pro-Anwar camp—the so called “Erdogans”—assert its influence in the party. The challenge for this camp, however, is that it has now lost its ideologue, Anwar. Moreover, the undercurrents in the party suggest the Erdogans are slipping out of favor from the party’s grassroots members. 5 Second, what is the attitude of Ustaz Haron Din— the deputy spiritual guide of PAS when Nik Aziz was at the helm of the party—towards UMNO and Malay unity? Haron was very consistent on the role of Islamic state and hudud laws, and insisted on the implementation in Malaysia despite DAP’s challenge. 6 In essence, unless PAS quickly reaffirms its identity, uncertainties in PR would continue.

Norshahril Saat
Norshahril Saat is a researcher at the Institute of Southeast Asian Studies (ISEAS). He is currently completing his PhD at the Australian National University (ANU) on the Indonesian and Malaysian state-ulama relations. 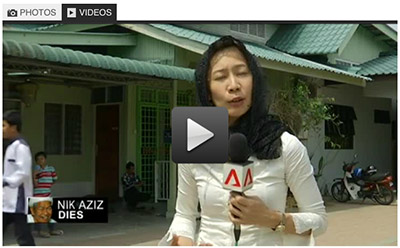