On the day I became ordained and saw their tears of joy I felt that it was the peak of my life. I have succeeded in many things – careers, money, and so on. But it was only on that day that they happily cried.

– June 1, who was temporarily ordained as a samaneri at Songdhammakalyani Monastery. 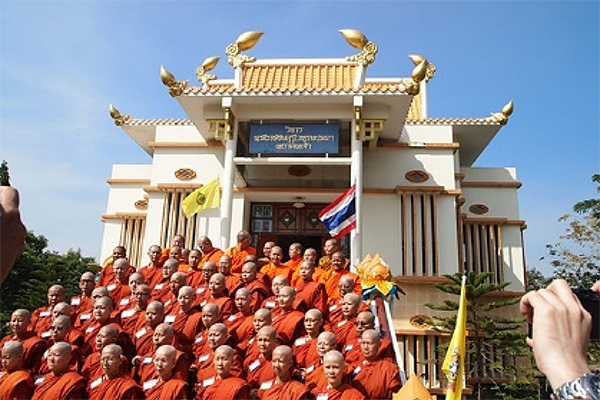 In Thailand, where around 95 percent of the population self-identify as Buddhist, temporary Buddhist ordination is a long-standing tradition for men, but not for women as they cannot be conventionally ordained. Only in 2009 did temporary ordination for women become available to the public and they can now assume the scriptural form of samaneri (female novices). Songdhammakalyani Monastery, where the abbess is Bhikkhuni Dhammananda – the first contemporary Thai “Theravada” bhikkhuni (female monks, fully ordained nuns) – is the first monastery to offer this new temporary ordination in Thai society. The monastery, located in Nakhon Pathom, had continued to provide ordination twice a year since 2009, and this April (2018) will be the twentieth time that ordination has been offered 2. It is also not the only monastery in Thailand that offers this ordination to the public. At least two other bhikkhuni monasteries, Nirodharam in Chiang Mai and Thippayasathandhamma Bhikkhuni Arama in Songkhla, also do so on a recurring basis.

This availability of samaneri ordination took place after the emergence of contemporary Thai bhikkhuni in 2003. That year, Chatsumarn Kabilsingh, a renowned scholar in Buddhism, returned to Sri Lanka for the bhikkhuni ordination after being ordained as a samaneri in 2001 3. This incident notably happened not long after the initial revival of contemporary “Theravada” bhikkhuni sangha (community) in Sri Lanka, which follows the ordinations of Sri Lankan women in 1996 and 1998. To date, the bhikkhuni ordination in Theravada lineage, however, remains globally controversial and is one of the most contested issues in today’s Buddhism. In Thailand, around 270 existing bhikkhuni and novices are still controversial figures. They have no official status as the monastic authority, the Supreme Sangha Council, has declared their ordination invalid 4.

The scholarly literature tends to focus on the legitimacy (or lack thereof) of bhikkhuni ordination and few researchers pay attention to the contemporary bhikkhuni themselves, including the Thai bhikkhuni 5. There is also very little existing scholarship mentioning the temporary samaneri ordination offered in Thailand (Suat Yan 2011: 219–232; Itoh 2013: 269–271; Bhikkhuni Dhammavanna 2017) and none that focuses on the social impact of ordination, an intriguing aspect to investigate.

Temporary ordination for men to become novices or monks is a long-standing tradition in Thai society that embodies various social functions and benefits, in addition to being a means of engaging in spiritual practice (Keyes 1986; Swearer 2010: 50–53; Terwiel 2012: 270–271). These benefits include, for example, the traditional rite of passage to adulthood, a means of acquiring education and, importantly, an avenue for “repaying the debt” to one’s parents (ibid.). As it is commonly thought that children are in debt to parents (especially mothers) who bring them into this world and raise them, they have to “repay the debt” to their parents and ordination is usually regarded as the way to do so (Swearer 2010: 53). Without the availability of similar ordination for women, all these functions and benefits were formerly inaccessible to anyone other than temporarily ordained Thai men.

As mentioned, it was only in 2009 that temporary ordination for women assumed the scriptural form now available to the public. It is acknowledged that women can only become novices in this ordination and not female monks 6. Nonetheless, it is still the first time that ordinary women who do not have to be outstanding in Buddhist practices can be ordained and wear the saffron robes––the robes that embody significant social and religious values as well as being commonly seen as inherently sacred.

Before this availability of temporary samaneri ordination, women who wished to take temporary ordination could only assume alternative renunciant forms such as that of mae chi (women who have their heads shaved, wear white robes, and mostly keep the eight precepts). Assuming the alternative form, however, appears not to be as socially valuable as the scriptural form 7. For one thing, this new temporary samaneri ordination is socially celebrated and contains pre-ordination ceremonies, while mae chi ordination is often privately held and not celebrated (Lindberg Falk 2007; Cook 2010). This aspect of social celebration makes samaneri ordination different from the preceding forms of women’s “ordination” in Thai society and it is also similar to traditional temporary ordinations of men. For example, in samaneri’s pre-ordination ceremonies there was a procession of samaneri candidates with their families and friends. This procession is similar to the commonly reported procession of male candidates (Cook 2010: 63) and is absent in mae chi’s ordination.

Interestingly, my data also reveal that while women often have more than one reason motivating them to become ordained, the most prevalent one is “to be ordained for parents.” Around 70 percent of samaneri who were ordained at Songdhammakalyani Monastery in December 2013 mentioned being ordained for parents, and around half of them said that it was their sole motivation. Take the story of Fa for example:

Being motivated to be ordained for one’s parents also appeared to be relatively common at another bhikkhuni monastery that offers temporary samaneri ordination to the public – Nirodharam.
For instance, Jan, who used to be temporarily ordained as a samaneri at Nirodharam, told me that she and her sister came to be ordained at the monastery together as “we believe that to ‘be ordained in the saffron robes’ is the greatest thing that children can do for the parents.”

The Samaneri Ordination and Transformation of Gender Ideologies

Once the significant saffron robes were inaccessible to Thai women – women were instructed to stay away from monks (Terwiel 2012: 112), which by default includes staying away from the saffron robes. Thus, wearing of the robes by women is also described as “counterintuitive at best” and “at worst sacrilegious” to many Thais (Varaporn 2006: 245). Given this history, availability of samaneri ordination to the public, which allows ordinary women to access the significance of the saffron robes, is undoubtedly empowering for Thai women in general. Importantly, it redefines a widespread gendered notion of repaying the debt to parents, which closely relates to the ability to wear the saffron robes. Through redefining this notion, gender ideologies and gender roles are positively transformed for women.

As discussed, repaying the debt to parents is widely seen as the best possible outcome from being ordained because parents are thought to be able to gain merit accumulated from their children’s ordination (Swearer 2010: 53–54). As mothers cannot traditionally be ordained themselves, it is reported that being ordained for one’s mother is probably the strongest motivation for ordination of temporary Thai male monastics (Keyes 1986: 88). There is even a common saying in Thai society that mothers can “cling on to the saffron robes of their sons in order to ascend to heaven” (Kunlavir 2006: 4).

Notably, only men as sons are capable of repaying the debt to parents through this traditional ordination. While daughters are expected to repay the debt through other means, such as taking care of parents, these activities tend not to be as highly valued as the ordination of sons (Mills 1997: 41–42). It is also ambiguous whether the act of women becoming mae chi can function similarly to the son’s ordination (Lindberg Falk 2007: 83–84). Undoubtedly, not having the capacity to be ordained and wear the saffron robes to repay the debt to parents has negative implications for women. Many women participating in temporary samaneri ordination had even wished that they might be born as men in their next lives so that they could be ordained. Some also linked their lack of access to ordination to past bad karma that had resulted in their being born as women.

Because of the current availability of temporary samaneri ordination, the traditional gendered notion of repaying the debt to parents is now redefined as more gender inclusive. Consequently, gender ideologies and gender roles are positively transformed. First, lingering negative attitudes about women can potentially be altered – such as the belief that being born a woman is because of past bad karma – or eradicated. Second, the social categories of daughters and mothers, including their traditional roles, can be positively transformed. Daughters can also now repay the debt to parents in the same way as sons. Thus the roles of daughters in the family and what it means to be or to have a daughter can be altered. Women as mothers also no longer have to wait to have sons ordained and dedicate merit to them. Their daughters can also do so or they can simply be ordained themselves. The effects of this change are nothing short of profound.

Currently, at least 1,488 Thai women 8 have received temporary samaneri ordination across the country and their number continues to grow. It remains to be seen whether this temporary ordination can embody other functions and benefits of traditional temporary ordination for men, such as providing education. Nevertheless, the important function of repaying the debt to parent that it does carry is already hugely empowering for Thai women. In the long term, the temporary ordination of women may prove to be the greatest social impact of the bhikkhuni movement on Thai society.

This article is derived from the author’s PhD research. The fieldwork for this research took place between October 2013 and September 2014 at the main field sites of Songdhammakalyani Monastery and Nirodharam. Data used in this article were obtained during this fieldwork, and particularly from the time that the author stayed at Songdhammakalyani Monastery throughout the period of the temporary samaneri ordination in December 2013. All photos in this article are taken by the author.

Seeger, M. 2006. The Bhikkhuni-Ordination Controversy in Thailand. Journal of the International Association of Buddhist Studies, 29(1), pp. 155–183.