This paper sets out to challenge the conventional wisdom that structural factors consist of the China threat, and that the ongoing South China Sea disputes are the prime factors in the current military build-ups in Southeast Asia. Structural explanations such as these are insufficient to explain the full account of regional military dynamics. Instead, this research argues that military build-ups in Southeast Asia are more multifaceted. There are domestic drivers in play such as the role of elites, corruption, economic development and state actors’ perceptions. These all provide a wider range of explanations of Southeast Asia’s military dynamics.

It is claimed that this regions military dynamics, and to a larger extent the Asia-Pacific’s, is driven by military one-upmanship and that has unfolded into an arms race. Some scholars have claimed that an arms race was present in Southeast Asia even before the end of the Cold War due to an upward trend in defence spending, driven largely by the open competitiveness of the extra-regional powers as well as the competitiveness of the intra-regional members (Wah 1987). Often it is reiterated as axiomatic conventional wisdom that the rise of China is causing a geopolitical shift, changing the balance of power that drives states in the region to intense military build-ups (The Economist 1993; Kaneda 2006; Chang 2012; Lee 2015). There is little doubt that China’s economic growth and its military capabilities have grown over the past few decades. Some argue that China’s military build-up is interpreted as part of its effort to expand its influence in the region as an emerging power, and challenge the US primacy as the regional hegemon (Brzezinski and Mearsheimer 2005; Agnihotri 2011; Majid 2012).

Further, the on-going territorial and maritime dispute in the South China Sea with multiple claimants have escalated the tensions in the region (Wu and Zou 2009; Dillon 2011; Fravel 2012; Davis 2013; B. S. Glaser 2012; B. S. Glaser 2015). Southeast Asia hosts one of the most complex territorial maritime issues as six states (Brunei, China, Malaysia, Philippines, Taiwan and Vietnam) have overlapping sovereignty claims over the territorial area. Although claims on the oil reserves vary, it is speculated that the seabed has a major cache of oil and gas and that the island chains have strategic significance for defence and surveillance for all parties (Ebbighausen 2012). Significantly, scholars emphasize that increasing military modernization is due to China’s assertive behavior in the territorial disputed waters. Tensions have been further stoked by actions such as the unilateral decision by China to place an oil drilling rig in the overlapping claimed maritime territories between China and Vietnam, and by doing so, provoking incidents in the South China Sea (Raine and Le Miere 2013; Hunt 2016).

These incidents have led scholars to argue that the rise of China along with its accelerated military modernization program poses as a threat in the region. Tension is on the increase and states have faced an intense “security dilemma” and subsequent arms race (Christensen 1999; Wu and Zou 2009; Davis 2013; Liff and Ikenberry 2014). Significantly, these wide-ranging security issues have prompted some Southeast Asian states namely Brunei, Indonesia, Malaysia, Philippines, Singapore and Thailand to increase their military modernization efforts (Till 2012; Tan 2014). This action leads some observers to argue that they are engaged in military build-ups due to their China concerns and uncertainties over what the future may hold (Klare 1993; Klare 1996; Bitzinger 2007; Dutton 2010; Murdoch 2012). Wholesale weapons purchases as well as increases in modern defence capabilities has led journalists, scholars and policymakers to conclude that there is an “arms race” in Southeast Asia (Klare 1996; Gauba 2015).

While military spending has certainly increased, the causes are more multifaceted and complex than the provocative arguments routinely offered by scholars and analysts. Kang, amongst the few scholars who problematized the structural explanation, has provided a comparison of statistical analyses between East Asia and Latin America and states that the spending between the two regions are relatively similar (Kang 2014). Furthermore, Welsh argue that the main drivers of soaring military expenditure is domestic as opposed to structural (Welsh 2015).

Closer inspection of data by The Military Balance and SIPRI on Southeast Asian military spending shows that almost all states only resumed their increasing military spending after 2001, when states finally managed to turn the corner after the 1997/98 Asian financial crisis (IISS 2014, The Military Balance 2015). Upon closer assessment, the key factors in Southeast Asia are more complex and multifaceted. For instance, figure 1 shows that Thailand’s military spending soared exponentially after 2006. This took place since the military coup in 2006, and once in power, the country’s spending on the military soared despite any external threats (Abuza 2015). Moreover, the civil-military relations in Thailand are unequal as the military are more powerful than the civilians, which might also explain the soaring military expenditure (Chambers 2013). In the case of the Philippines, figure 1 shows only minimal increase in military spending despite growing maritime tensions with China on the South China Sea. Currently, the Philippines is ill-equipped to match its ambitions to challenge China in tit-for-tat military acquisitions to defend its territorial sovereignty, a point often argued by advocates of structural explanations for the arms race. This challenges explanations normally offered to for the increases in military expenditure in the region. It also suggests a more focused analysis on the region might provide a much broader narrative towards the determinants of military spending in Southeast Asia. Given these examples, it is imperative to examine domestic politics and not just the external threat perception as a key drivers in explaining regional military dynamics. 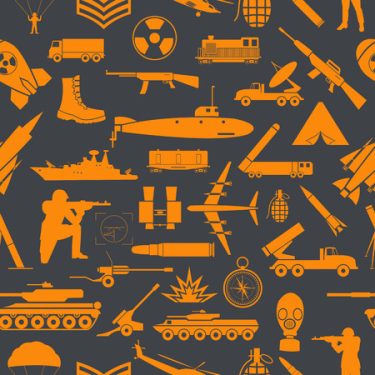 In summary, this paper set out to challenge the conventional wisdom that an arms race is taking place in Southeast Asia. Recent military modernization in Southeast Asia gave rise to this consensus and proponents offer two dominant explanations for the increase of military acquisitions. One of the main arguments behind the arms race is the rise of China and it changing the balance of power, bringing instability to the region and fuelling military acquisitions. Another most cited is China’s assertive behavior in regards to the South China Sea dispute. However, these explanations are inadequate to fully describe the interstate regional military dynamics. Domestic politics and and the decision-making process of the regional players might provide a better alternative explanation.