International Capacity Cooperation (国际产能合作) has been on the policy books in Beijing for the past three years, and its practical effects are beginning to be felt in China’s external geographies. China’s Ministry of Commerce is tasked with implementing a monumental policy initiative, the closed-capital account equivalent of an FDI foreign trade strategy. This is the public administrative arm of the Belt and Road geopolicy, and the practical financial avenue for Chinese funds to reach Southeast Asian economies. In a command economy, the physical economic infrastructure is coordinated by the state, the same is true of China’s offshore geoindustrial policy. The plan is simply to move Chinese factories to external geographies, to take China’s investment-driven construction and manufacturing industries offshore. It is to have much the same capital effect as Japan’s rapid development of regional production networks after the Plaza Accords, with the exception that China’s capital account is to remain closed throughout this capital offshoring period.

An array of geography-specific policies and plans are working their way through consensus in Beijing and transmission to local governments in China. Provincial and prefectural governments in China are being paired with external geographies and instructed to coordinate industrial production with China’s central government. For ASEAN economies there are clear opportunities presented by Beijing’s policy, to replicate and complement the system of industrial parks and regional production models that Japan has already established. Yet the Chinese model also presents serious financial risks which are not being clearly presented to host economies. 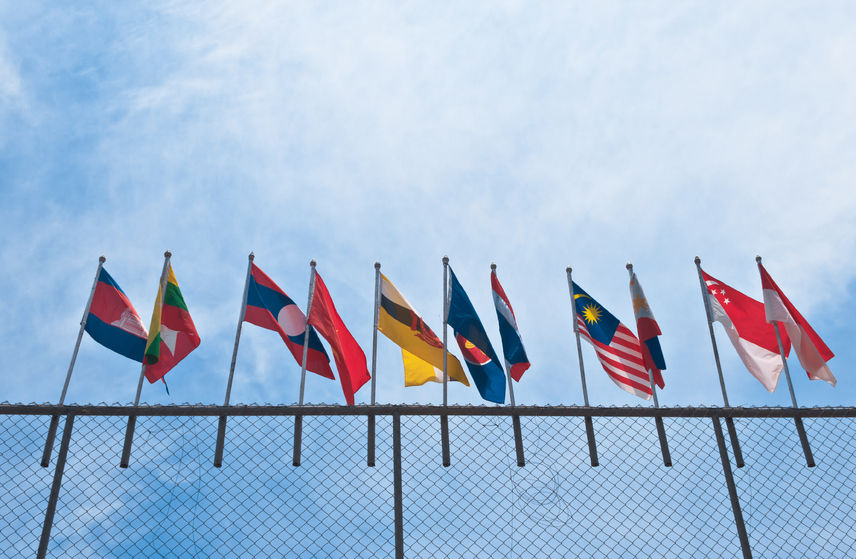 Guangxi is the only province which is connected to ASEAN by both land and sea. Its role in the wider Belt and Road macrogeopolicy is a spatial international economic industrial policy composed of ‘one hinge, one centre, five channels, and six networks’. This is Beijing policy parlance for the construction of the Nanning international transport hinge, Beibu Gulf international shipping centre, the five economic corridors of maritime ASEAN, land ASEAN, Belt and Road, Southwest and Central-South China, and the Pearl River Delta (Guangdong, Hong Kong and Macao); the six networks are port network, highway network, high-speed rail network, dense aviation network, fiber-optic communication network, and gas pipeline network.

Guangxi is not the only province with centralised plans to dock with Southeast Asia. Both Shanxi and Shaanxi are slated to look south to ASEAN to integrate themselves into the the global industrial manufacturing chain. Debt, coal and corruption riddled Shanxi province is to dock China’s Belt and Road with Indonesia, with a joint project already underway between China Railway Group and Indonesia Wanxiang Nickel Company in the Sulawesi Nickel Iron Industrial Park project. While Shaanxi is integrating more completely with China’s ‘Industry 4.0’ and ‘Made in China 2025’ industrial policies, selling itself as ‘Big Xi’an’ to take advanced aerospace, engines, components and equipment out to ASEAN FDI. Both provinces are keen to shed the image of coal and peasant labour dependencies, and the state subsidised centralised industrial complex, and rebrand themselves as purveyors of advanced manufacturing technology.

China’s industrial policy in external geographies is governed by a ‘one-by-one’ approach that favours bilateral agreements with sovereign states over multilateral bodies. Yet China’s economic ambitions in the region are organised in multilateral blocs. China’s primary focus is the Nanning-Singapore economic corridor through Thailand and Malaysia while the secondary external cooperation mechanism is focused on the CMLV bloc of Cambodia, Myanmar, Lao, Viet Nam.

Thailand is an integral hub for China’s Belt and Road strategy, as a corridor for the Nanning-Singapore economic corridor, supporting the Thai Eastern economic corridor and as China’s entry into Cambodia, Laos, Myanmar and Viet Nam markets through the China-IndoPeninsula economic corridor strategy. This is before the ephemeral Khra Isthmus canal is in the mix.

China-Thai International Capacity Cooperation will present in practical terms through expansion of the industrial park system. Practical agreements are already in place for the China-Thailand Chongzuo Industrial Park and Pazongfu Special Economic Zone in China, and Thailand’s Rayong, Loka, and Li Sheng Rubber Industrial Parks. At the executive level, four agreements between the Thai and China government have recently been signed: The broad Thai-Chinese high-speed rail project; specific Bangkok-Nakhon Ratchasima high-speed rail Civil Engineering Design Contracts; Memorandum of Understanding on Cooperation Between the Silk Road Economic Zone and the 21st century Maritime Silk Road; and the Joint Action Plan on Strategic Cooperation between China and Thailand (2017 -2021). Thai laws have also been herded into compliance with the bilateral rail agreement.

Of course the main axis in Thailand’s development and inbound investment strategy is the relationship between Japan and China. There is deep-seated respect and gratitude in Thailand for Japanese industrial investment, probably more so than in any other East Asian economy where the ADB has largely failed its mandate to deliver targeted investment to aid industrial development. Japan is currently realigning its international trade and investment strategy to a geopolitical containment of China and the competition for investment that Chinese capital brings.

Most trade and investment with China’s external geographies is a one-way street. For Thailand in particular and for ASEAN in general, there is a real possibility to create a two-way trade and investment architecture. But for ASEAN this requires a common external trade policy, not allowing China’s one-by-one policy to isolate individual states. And for Thailand in particular engagement with China investment has a very real possibility to become a multi-directional investment axis, if Japan and Indian FDI and infrastructure competition can be played against China.

Semi-industrialised and with large rural populations still heavily sensitive to prices on core agroindustrial products and inputs such as rice, rubber, cassava, sugar, and palm oil, the economies of Thailand, Indonesia and Malaysia on one axis, and the CLMV axis on the other need one final decade of solid industrial investment from Northeast Asia to get them over the line into high-income and advanced manufacturing economies. For ASEAN it should not matter whether that investment comes from China or Japan, but the smart money will be betting both ways.