When a Widow Takes the Helm

When a family is forced to come to terms with the reality of extra-judicial killings (EJKs) and political assassinations, as well as the seemingly hopeless and endless fight for justice, one may wonder to what extent this socio-political film resonates with the numerous families – especially, widows and children – that fall victim when a family member – usually, male – is killed due to reasons that are largely politically-motivated, such as election-related incidents. EJKs have become a byword in the Philippines that refers to killing without due legal process, a significant part of which is done by vigilante groups taking matters into their own hands, as well as the police who seemingly utilize this method as a short-cut to eradicate criminals, or perceived wrongdoers.

Kabisera (The Seat), one of the films featured in the Metro Manila Film Festival (MMFF) in 2016, is an independent feature that tells the poignant story of a family in a small Philippine municipality whose lives fall into turmoil when the father is victim of a “rub-out” that may or may have been a politically-motivated frame-up, and how the family is kept together by the matriarch despite all these. More than a statement about the rise of EJKs in the Philippines that coincides with the government’s “war on drugs”, the film also points to a deep-seated “social ill” in a country where socio-economic inequality has woven a dark veil over the justice system that is supposed to protect the weak but, sadly, only protects a few, mainly the rich and the powerful. 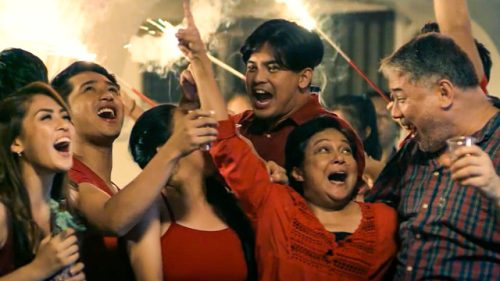 Award-winning actress, Nora Aunor, flawlessly portrays Mercedes “Mercy” De Dios, a housewife to Antonio “Tunying” De Dios (played by veteran actor, Ricky Davao), a barangay captain (district head). A well-loved public servant, Tunying had two attempts on his life before the police entered his home arresting him for being one of the primary suspects in a controversial bank robbery. Not getting a chance to defend himself, an unarmed Tunying was shot at close range by one of the policemen just outside his home while descending the stairs. This was a turning point in the lives of his wife, his daughter, and four sons who tried to make sense of Tunying’s death and the false charges brought against him. Adding insult to injury, eldest son Andy was also implicated in the bank robbery and was charged; only to be killed by two men on a motorcycle while he was on his way to visit his girlfriend. The succeeding scenes showed the remaining members of the family trying to piece back their lives. Question, however, remain unanswered. The film ends with Mercy and her human rights lawyer walking towards the Department of Justice.

In the film, Aunor personifies the millions of women who live their everyday lives in support of their husbands who are still considered and expected to play the role of breadwinner in Philippine society. Mercy is the supportive wife to Tunying and loving mother to her children. In fact, kabisera refers to the seat at the head of the table, which signifies a position of power and is usually occupied by the male head of the household. This was the seat Tunying occupied at the table up until he was murdered. It is also this same seat that Mercy reluctantly sat on after the death of her husband, and the seat that she eventually occupied in her continued fight for justice and search for answers to the deaths of her husband and eldest son, Andy. Upon Tunying’s death, the seat at first remained empty during family dinners, seemingly signifying a void that had to be filled sooner or later. Several scenes into the movie though, while discussing future steps the family would need to take, Mercy is seen to leave her chair at the table and sit at the kabisera.

Mercy seated at the kabisera – the seat at the head of the table, speaks of the women who have called out for justice and who have taken the helm to seek for the truth and fight for their husbands, sons, and daughters, who fall victim to politically-motivated killings. It also speaks of the need for women – daughters and widows, who lost their fathers and husbands – to take an empowered stance and actively make their voices heard in their struggle to achieve what is just. Despite an initial set-back in the case due to a “lack of evidence”, Mercy chose to continue to pursue the case and seek justice with the help of a human rights lawyer.

While there is no doubt that Aunor delivered in her performance, along with an ensemble that played their roles well, the film’s storyline is still somewhat wanting. Aside from its predictability, and a simplistic rendering of scenes, the film has several loose ends that may disappoint the demanding viewer – although the loose ends themselves probably serve a function, or render a message that the film might have failed to convey at the outset. A movie on politically-motivated assassinations and EJKs could have delved more into the issue and focused on the structural factors that have led to these kinds of killings. While the film alluded to some of these, it could have accentuated the various intersecting factors (including class, status, and gender) that have and continues to maintain a flawed judicial system in an unequal society. A more emphatic treatment of the anguish of the victims (i.e. the De Dios family) that would resonate with the viewers might also prove a more effective tool to bring forth the statement that this movie attempts to make. Nevertheless, the film’s political statement may resonate enough without over-powering the film, and in addition, the quality of Aunor’s portrayal of the lead character, Mercy.

The film closes with a statement on the drug-related killings that have been taking place in the Philippines recently, as well as the numerous children orphaned and wives widowed under the government’s so-called “war on drugs”. Undoubtedly, producing this film is a brave step in speaking out against political injustice through a mass medium.