To reach the true value of this book, the reader might skim the editors’ introduction and proceed to the six substantive essays, for two reasons.

First, the introduction is a contentious but unclear treatment of theoretical issues with which the editors had hoped to frame the book. For example, the editors are rightly uneasy with simplistic dichotomies of democracy and authoritarianism. But what can they mean by moving “beyond the authorianism/democracy axis” “towards post-authoritarian societies”? They refuse to truncate authoritarianism to “a state of being” or “system” that operates in a clearly demarcated territory, space or institution.” Yet, is it any kind of improvement for “authoritarianism [to be] understood here as a set of diffuse relationships both in the public and private spheres, where power is never totally concentrated on a single person or group – as it may occasionally appear – and without legal or moral accountability to the public”?

Second, and happily, the substantive essays make valuable contributions to the comparative analysis of recent struggles, mounted by different forces, to “challenge authoritarianism” in Indonesia and Malaysia. The book is not exclusively concerned with Reformasi in both countries, but five of the six essays address critical points of dissent in 1998–99. The exception is Philip Kelly’s study of Penang, Malaysia, and Batam, Indonesia, that fulfills one of the book’s objectives by systematically contrasting the constraints that “bureaucratic authoritarianism” in Malaysia and “centralized, coercive authoritarianism” in Indonesia impose upon “associational life.” Offering original insights into the rise of intellectual and artistic dissent, formation of state-labor relations, women’s activism, and the tensions between Islam and democracy, the essays pay an engaging attention to civil society’s multifaceted defiance of authoritarian rule. 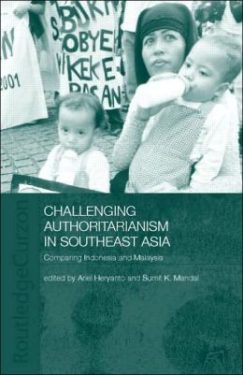 Ariel Heryanto’s discussion of pre-Reformasi campus and faculty contestations in Satya Wacana Christian University (SWCU) ties a cultural politics of university development to capitalist industrialization in Indonesia. Leading intellectuals, not subalterns but subalternists, Heryanto intriguingly argues, made SWCU a site of “intellectual radicalism” that supplied “sympathetic associates” for “labour unionists, pro-independence East Timorese activists, feminists, lawyer-cum-activists, and radical environmentalists.” As it were, a middle-class civil-society triumvirate of subalternist academia, industrialized journalism and professionalized activism defied authoritarianism from the margins when “dissenting confrontation was by definition suicidal.” Rejecting “myths” of middle-class voluntarism, Heryanto hints, albeit as a footnote to his main account, that the absence of a comparable triumvirate, acting in mutual defence, explains the failure of Malaysian academia to react vigorously to Anwar Ibrahim’s dismissal in September 1998.

Vedi Hadiz usefully connects his comparisons of state-labor relations in Indonesia and Malaysia to experiences in Thailand, South Korea and Latin America, and to theories of state-capital-labor accommodation. His conclusions are stark but realistic. In Malaysia, “state-labour relations have been more institutionalized” but deprive labor of “political space to carry out challenges to state power outside of formal institutions.” In Indonesia, however, “challenges to state power from outside of formal institutions were a feature of state-labour relations … even at the height of Suharto’s powers” but were “never particularly effective.” If a social democratic state-capital-labor accommodation would be his preferred non-authoritarian outcome, Hadiz is not hopeful for either country. He sees a huge obstruction in the prevailing combination of domestic political alignments, the timing of industrialization, and the integration of late industrializing countries with the global economy.

Nor is Norani Othman other than guarded about the prospects for “Islam and democracy,” judging from her evaluation of Malaysia’s Islamization which, via the stateand an Islamic opposition, has transgressed “contemporary notions of women’s rights and freedom.” Impressed with the pluralism of Indonesia’s non-state Islam, Norani urges “an internal cultural and religiously informed contestation.” A prominent member of Sisters-in-Islam, she sees in the networks of Muslim women activists, “modernist or reformist Muslim groups,” non-Muslim women’s organizations and other non-governmental organizations a civil-society bulwark against state dominance and religious orthodoxy. Neither discourse nor practice, however, has resolved a dilemma raised by Reformasi in Malaysia. When an authoritarian “moderate-on-Islam” state is pitted against a religiously conservative anti-authoritarian opposition, should one bank on a democratization of the state’s “Islamic agenda,” or an Islamization of the opposition’s “democratic project”? Curiously, Norani hoped for the former without considering the latter – although neither seems imminent.

If it seemed no less unlikely that Indonesian women’s activism could recover from the New Order authoritarianism, it did so suddenly during Reformasi. Amidst chaos and violence, the Indonesian women activists, who were wary of formal political representation – unlike the Women’s Candidacy Initiative in Malaysia – had to bridge class differences, overcome stigmatization, and confront economic desperation, ethnic and religious conflicts, and violence against women. Nothing better captures the aptness of Melani Budianta’s characterization of that “emergency activism” as a “blessed tragedy” than her richly detailed accounts of the Suara Ibu Pertiwi’s inventive adaptations of notions of “mother” and “motherhood,” and the Seruan Perempuan Indonesia’s adoption of pluralist “ecumenical messages of peace and tolerance.” Their discursive strategies, peace rallies, interfaith prayers, and non-violent mobilization were evidence that a newly seized empowerment could overturn authoritarian suppression without being eclipsed by the “larger” Reformasi.

Creativity of a more conventional though uncommon kind – dissenting literature, art, drama, and music – forms the subject of Sumit Mandal’s essay on the “cultural engagement of activist arts workers” in Indonesia and Malaysia, roughly of the same Reformasi era. Mandal might have overstated “an unfragmented Malaysian identity or a genuinely pluralist Indonesia” as conscious projects to “recast society and politics.” Mandal soberly observes that art does not overthrow authoritarianism. But his impressive knowledge of a wide spectrum of media and actors underlies his pioneering comparative survey of the deep potential and ability of protest art and artistic dissidents to supply bold critiques of authoritarian structures and strictures.