There is tremendous preoccupation with Islam in Malaysia today. Unfortunately, much of it is focused on form rather than substance, the effects of which are largely felt by Muslim women.

Malaysia portrays itself as a modern Muslim country and indeed it is, in many significant ways. The country is relatively democratic; we have a Federal Constitution that respects fundamental liberties and equality of persons before the law; we take a forthright position on the international stage and we are – despite the niggly problems – proud of our multi-ethnic and multi-religious heritage.

But Malaysia is also caught in the throes of an Islamic resurgence which has given strength to an obscurantist strand of the religion. This is threatening to reverse the gains we’ve made in our plural society. These days, a heightened awareness of Islam is felt in almost every sphere of society, much of it seen in the long list of dos and don’ts for Muslims. Even billboards have not been spared: in the northern state of Kelantan which is under opposition rule, outdoor advertisements of women are suitably covered up the Islamic way.

Naturally, this has alarmed Malaysians of other faiths as well as those who consider themselves moderate Muslims. But the group most palpably affected are Muslim women who must now worry about how we conduct ourselves in public; how we serve our husbands lest they take second wives; and how we dress – to “repel sexual abuse and harassment.” Today’s definition of a good Muslim woman would include words like “submissive,” “selfless,” and “obedient.” Most worryingly, Muslim women are being taught that they are inferior to men.

That there is a wide chasm between theory and reality is hardly ever acknowledged by the traditional religious authorities. That the Quran gives equal value to both women and men before God is also never stated. Yet Muslims are told that Islam offers solutions to all problems. If Muslims are not finding the answers, they are just not trying hard enough.

Any attempt to question the authorities on how Islam is being interpreted, taking into consideration the socio-historical context in which Quranic verses were revealed in 7th century Arabia, or how patriarchy is used to justify the subordination of women, is seen as dangerous and heretical. Women’s groups such as the feisty Sisters in Islam – a group of Muslim women  fighting for women’s rights within an Islamic framework – and individuals who point out the illogicality of certain pronouncements made by the ulama (religious teachers), have all been accused of confusing the community and insulting Islam. In direct and subtle ways, Islamic laws pertaining to divorce, inheritance, child custody, and maintenance are giving men a decided advantage over women. Even in Islamic criminal laws, women face inbuilt discrimination said to be  sanctioned by God.

But the religion was not always practised in this manner. The Islam of thirty years ago, for instance, was a kinder, softer, and gentler religion which allowed us the use of conscience and common sense in our daily lives. In fact, for decades, Muslim women, especially in Malaysia and Indonesia, have enjoyed far more freedoms and rights compared to their sisters in the Middle East and South Asia. Our cultural traditions or customs defined and affirmed women’s role and their public contribution or participation, often in positive, non-hierarchical ways.

The Malaysian Muslim society that evolved in this part of the world recognised women’s role in public spaces and women’s right to be treated as independent individuals. We have always owned and inherited property and worked outside the home, whether as farmers in the earlier agrarian society or as factory girls, teachers, lawyers, doctors, and engineers in today’s industrializing society.

And, until the late 70s, wearing the tudung (headscarf) was not part of the Malaysian Muslim culture. Instead, what was used was a selendang, a long soft shawl which covered the head and was draped loosely over the shoulder. Nor were women expected to be veiled when outside their home. In public spaces, men and women mixed freely whether at work, at weddings, or other public functions.

Compared to women in many Muslim countries, we have never needed the written permission of their husbands or male guardians to travel abroad. And there was no tradition of a segregated women’s room or quarters in a Malaysian Muslim household. Because of these egalitarian beginnings, our women today enjoy equal access to education. In fact, earlier this year, more than 65 percent of students in the public universities were women because, as is reflected in trends in the West and other Asian countries, girls are outperforming boys in their studies.

Yet, growing Islamicity threatens to unravel all this.

Indeed, what is of concern here is not the increasing commitment of Muslims to Islam, but the spread of intolerance, aided and abetted by those who subscribe to the most rigid readings of the Quran. Consequently, the discrimination against women, the exclusivist attitude towards people of other faiths, the readiness with which Muslims with differing views are condemned as infidels or as those who have deviated from their faith, are challenging the very fundamentals of liberalism, tolerance, and the politics of accommodation that have been the hallmark of our plural society.

To make matters worse, Islam has entered the political realm where contending forces are struggling to out-Islamize the other. Arguments on whose Islam is the right Islam have entered parliament, state assemblies, government departments, courts, universities, schools, and even kindergartens. Unfortunately, because our understanding of the religion has been superficial (most Malaysian Muslims read the Quran in Arabic without understanding the meaning), we are fearful when someone says “Islam demands this…” or “Islam says that…….”

Our ignorance has turned us into a fatalistic flock of sheep.

But not all is gloomy. A possible redeeming factor lies in Muslim women themselves. Despite the threats and admonishments, many of them wear lipstick and just as many resist the pressure to cover themselves in black or drab grey, colors which would make them less visible in society. And although a growing number wear thetudung, they do it with style and verve, in a multitude of hues. This suggests that while the tudung is an important marker of identity, it is also the outcome of intense peer pressure. This duality is noted in the way women obligingly cover their heads, but wear the latest fashionable outfits in vivid and striking colors.

The popularity of local magazines which carry pages of Cosmopolitan look-alike models in seductive clothes, yet wearing the requisite headscarf, would attest to the dual demands. Even for some of us who live here, this ingenious appropriation of the definition of Muslim modesty can be astounding. But it is also life-affirming. It is a declaration that Muslim women will do their best by Islam but will not conform in ways that would diminish their personalities entirely. Perhaps these small acts of rebellion will give us the strength to preserve the spaces needed for Muslim women in Malaysia. 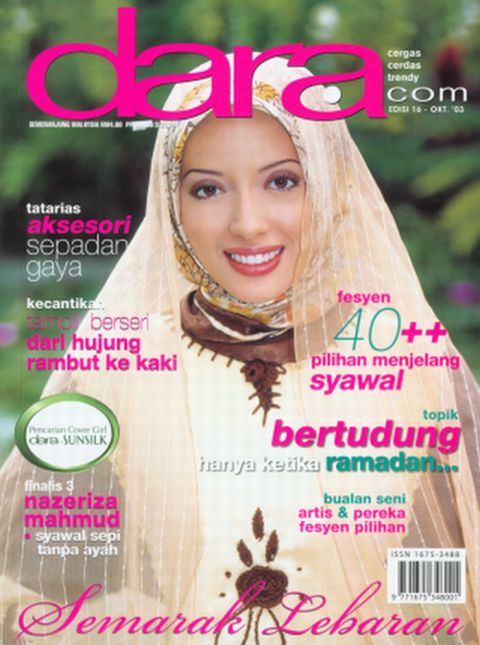