Since 1986, when the Vietnamese government began the policy of “economic renovation” called doi moi, and especially from the early 1990s, when it opened up to the west, Vietnam has been deeply involved in globalization. The evidence of this process is the last ten years’ high rate of economic growth.

I visit Vietnam almost every month and can attest to the fast tempo of change. The old state-owned hotels and shopless streets of Hanoi have now been replaced by modern hotel construction and flourishing retail businesses. Many Vietnamese – especially youth – have happily entered the consumer culture, building new houses, riding motorbikes, using mobile phones, and sending e-mail. But a motorbike costs from hundreds to thousands of US dollars. How do Vietnamese buyers afford these purchases when per capita income is only about US$400?

The answer is that lots of money is send into the country by Overseas Vietnamese. Other sources of foreign exchange are export businesses, private investment, development aid, and remittances from migrant workers. All in all, this money totals over US$10 billion per year and accounts for about one-third of the Vietnamese economy.

A deeper question is whether the Vietnamese government is taking full advantage of this valuable influx of capital. For despite the economic growth of the past ten years, we cannot say that industrial development in Vietnam has been successful. The quality of Vietnamese products is still low, private enterprise is weak in comparison with its global competitors, and like other regional economies, Vietnam is outpaced by China’s higher growth. The amount of foreign investment remains far below the critical mass needed to ignite industrialization. If the Vietnamese government does not take bold steps to correct this situation, capital inflow will eventually slow and stop, and with it Vietnam’s economic growth.

Two interventions are necessary to continue and strengthen the course of economic development in Vietnam.

One is the improvement of business climate. Contradictory and vague policies should be replaced by coherent long-term economic strategies carried out vigorously. This includes the provision of infrastructure, information, and services to foreign enterprise. If business conditions are improved, Vietnam will be a most competitive magnet for foreign investment in Southeast Asia.

Second is the need to deal with the disparities and dislocations of rapid economic growth. The side effects of this process are numerous: income inequality, environmental pollution, deforestation, traffic jams and accidents, rising crime, drug use, and prostitution. These problems cause social unrest and will eventually threaten economic growth, but today the Vietnamese government is not doing enough to address them.

In a rapidly growing country like Vietnam, one way to solve these problems is to encourage business-oriented NGOs. By linking altruism with business professionalism, some Vietnamese NGOs are becoming financially independent. They export ethnic cloth or operate first-class restaurants while offering jobs and care to the disadvantaged. Social programs need not be dependent on charity or public money.

Kenichi Ohno
The author is a professor of economics at the National Graduate Institute for Policy Studies in Tokyo. He advises the Japanese government on aid policies and has studied the Vietnamese economy since 1995. This commentary was translated from Japanese by Onimaru Takeshi. Below: Hanoi skyline, 2003. 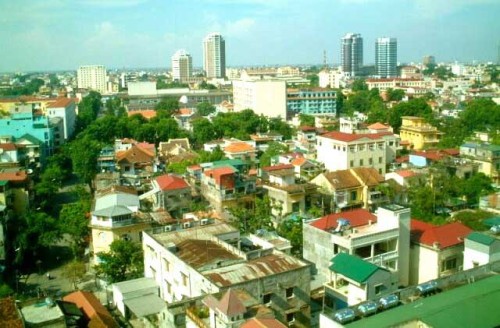