A retrospect of the Marcos regime has become inevitable, if not necessary, to make sense of the present Philippine democratic crisis under the Duterte administration. Volumes have been written about this period, yet the range of narratives and interpretations is by no means exhausted. To this day, those interested about the rise and fall of authoritarian rule in the Philippines and Southeast Asia are still learning from Asia’s oldest democracy’s struggle for and against a dictatorship.

Talitha Espiritu’s Passionate Revolutions is a novel starting point. Its novelty rests on the author’s treatment of “affect” as the anchor of the rise and fall of Ferdinand Marcos’ rule. While existing scholarship tend to focus on institutions and agents backing the regime on one hand, and the modes of resistance on the other, this book provides a panoramic view of how opposing sides interacted in both official and popular levels. Drawing from Lauren Berlant’s work on  national sentimentality and the “affective turn” in cultural studies, Passionate Revolutions set to “unpack the melodramatic politics inhering in the national allegories created by Marcos and his critics” (p. 10). Through analysing films, electoral campaigns, propaganda, student movements and media reports, it draws the inextricable yet understudied link between the intimate and public spheres and emphasized the salience of emotions in the formation of political attachments undergirding the politics of Marcos and his critics. 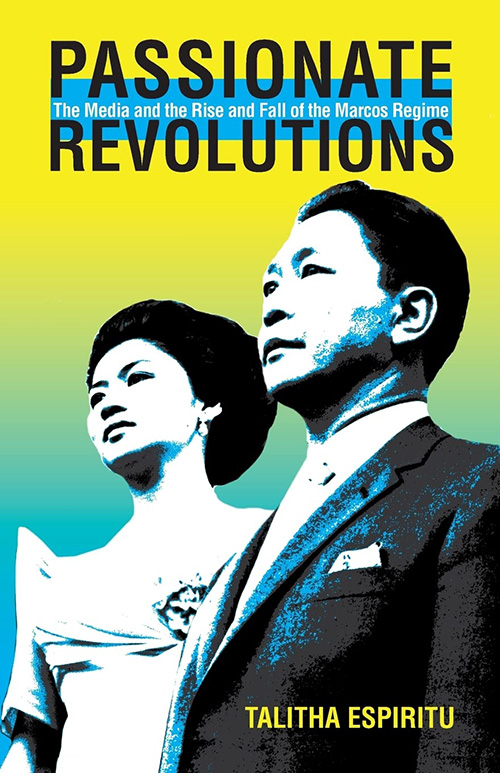 As the author notes, the book tells the story of two passionate revolutions in six chapters. The first three chapters narrates Marcos’ “democratic revolution”, and how he constructed a national allegory by feeding off from the spectacle that animated the First Quarter Storm and the symbolism that drove Cold War politics. It also lays bare the significance of the family metaphor, not only in winning the hearts and minds of the Filipinos, but also in effacing the paternalism of the dictatorship through Imelda, who represented the maternal figure of the nation. The last three chapters recounts the people’s revolution, where democracy from below took various forms, notably in the New Cinema and the establishment press. These chapters reveal the multi-faceted and dynamic nature of the struggle – it was by no means a consolidated middle class struggle, but a confluence of forces from different sectors that a collective consciousness enabled.

Overall, the book was well-written and relatively accessible. If the reader encounters difficulties in understanding the analytical parts, it is attributable to the introduction that lays the methodological foundation of the study, the theoretical interjections in the empirical discussions, and the way it subjects history (some of it familiar and recounted many times) to an interpretive discursive analysis. Despite these obstacles, the reader is presented with the complexity of constructing a dictatorial regime that has been conveniently shelved into dichotomies of “hard facts” and interpretations, of “rational” policy-making and aesthetics. It particularly stands out in its analysis of the transformations that occurred during the Marcos era, as both sides co-opted, appropriated and resisted each other in the name of a shared true feeling toward the nation. For instance, the author’s discussion treatment of Marcos’ response to the January 30 protests as an appropriation of the spectacular aspect of the movement, and the youth’s subversion of bomba films as a form of resistance, evince the integral role of emotions  during the era.

Another striking contribution of the book is its postcolonial approach. Passionate Revolutions used a Fanonian lens to examine Marcos’ paternalistic goal to for national healing via cultural rehabilitation. Although a more explicit connection between Marcos’ policies and Fanon’s radical thought is wanting, the author’s interpretation of Marcos’ “third way” provokes the reader to look beyond the anti-colonial and Neo-colonial criticisms that dominated much of the postwar discourse on Philippine domestic and international politics. To put differently, the postcolonial condition that emerged after the so-called Philippine independence spawned different forms of resistance, and in the case of Marcos, it was a hybrid of emancipatory politics and “white love”, borrowing Vicente Rafael’s term, that enabled his dreams for national renewal resonate towards the nation.

Yet, while the book offers a distinct perspective on the rise and fall of the Marcos regime, the book may benefit from major conceptual clarifications. Two concepts are particularly vague. First, the concept of popular as mobilized in the study appears to draw on the binary opposition of elite vs. popular, yet at the same time, it looks at elites as actively engaging in popular modalities and vice versa. A more active engagement with the concept may help illustrate the irreducibility of politics to formal institutions, policies, public officials, and their statements. Second, the concept of revolution, although integral to the work, seems to have been taken as given. For sure, the notion of revolution for Marcos and his critics have different epistemological underpinnings, and it would have been interesting to see how, from the affective turn’s perspective, they were imagined and mobilized, and perhaps opened a space to analyse some aspects of social movements while emotionally-driven, that may not have sprouted from revolutionary intents.  In clarifying these concepts, a more robust answer to the question, “how does the spectacular and the visual transmute sentiments and emotions?” could emerge.

Moreover, the book’s postcolonial take could also be enriched with the inclusion of Muslim Mindanao’s involvement in the construction and collapse of Marcos’ national imaginary. It could serve as a fascinating extension to Thomas McKenna’s work, Muslims and Rebels, which explores the impact of the declaration of Martial Law to Bangsamoro rebellion and insurgency in the Muslim South. The inclusion of the Mindanao could help test the book’s thesis of the salience of “shared feeling” , if not  debunk the myth of a renewed Filipino sense of nationhood that the Marcos regime espoused. It might also press some insights regarding the extent and tenacity of the collective feeling among subaltern agents during the period.

In a way, the lack of conceptual links may have been inevitable due to the author’s reliance on Berlant’s work on affect and sentimentality. Although this is not a major setback, it may have benefitted from engaging with other relevant scholarship on media and postcolonial studies. In terms of the media, one work that comes to mind is Marxist literary critic Raymond Williams’ work regarding high and popular culture, and structures of feelings. Such engagement with other theories may enrich the analysis of the people’s resistance movements, particularly those emanating from the working class. From a postcolonial outlook, Fanon may have been very well accompanied by the works of Ashis Nandy and the subaltern studies group to deepen the analysis of national leaders’ simultaneous penchant for independence and attachment from an external colonizer.

Despite these setbacks, the Passionate Revolutions arguably challenges our hardened notions about political transformations. It leaves one wondering why, despite its overwhelming presence in the people’s everyday lives – especially through consumed media content, there is a reluctance to tackle the emotional dimension of the Marcos regime. The author’s intelligent interweaving of historical facts and passions proves that scholastic rigor is possible even when seemingly abstract emotions is the main object of inquiry. Perhaps, with this in mind, we can better understand the appeal of Duterte and his so-called “emotionally-attached” supporters and critics.