‘Read till It Shatters: Nationalism and Identity in Modern Thai Literature’ is a surprise to many who are familiar with Ajarn Thak’s previous work on Thai politics, for example, ‘Thailand: The Politics of Despotic Paternalism.’ This book is a collection of his essays on modern Thai literature. But Thak explains in a preface a combination of circumstances that lands him in the field. His background, as an outsider and a late comer into the area, is actually a plus as he can offer a fresh look into an old subject. Instead of paying attention to prose or analysing techniques and structure, he tries to understand Thai politics through these selected literatures. His work resembles that of a respected Thai historian, Nidhi Eowsriwong, when he studied Siamese bourgeoise through early Bangkok literatures in his famed book, Pen and Sail. 1

The book covers a wide range of genres, from novel to biography, and time periods, from pre-1932 to early 2000’s. The first half concerns the lesser known era and titles; such as Kru Liam’s novels, which are considered among Thailand’s first novels; Luang Wichit’s Huang Rak Haew Luk; ML Boonlua’s life story; as well as Prince Bira’s racing. Many of them I have known only from mentions in other books, i.e. the Samgler series (Pol, Nikorn, Kim-Nguan by P Intarapalit) The second half is more contemporary with more familiar titles e.g. Lep Krut, Letters from Thailand, Through the Dragon Design, and Living with Grandfather. Also, the final chapter is about autobiographies of Thai celebrities. Some of these books are compulsory reading in school or adapted into films while others were once available in convenient store nationwide. Thak supplies readers with synopsis of these selected books and context such as the author’s background as well as political atmosphere at the moment the books were out. Thus, each chapter is quite lengthy but that length is necessary. Actually, it inspires this reviewer to try to read original works if chances permit. A combination of old and new, heavy and light-hearted, makes reading quite entertaining although this review would focus primarily at the first half. 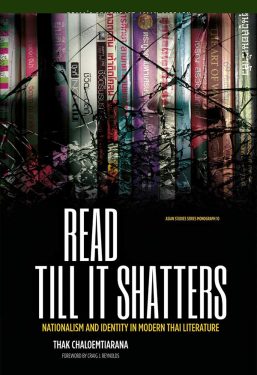 Despite the variety, one theme stands prominent. Thak asks repeatedly what is Thai identity in the age of modernity. These authors and their characters struggle to deal with that question as Thailand progressed on the path of modernization. They had to deal with the arrival of westernization and the end of the traditional world, notably after the 1932 Revolution. Writers experimented with the newfound sense of freedom and idea, with the story of self-determination and gender equality. But it is not always the case. In his third and fourth chapters, Thak shows a sharp contrast between two women, one fictional and another real, of how they deal with modernity. A commoner woman is a protagonist, defying much of conventional roles of female, experiencing adventure and immoral misdeed. The ascension of a commoner is in contrast with the downfall of the elite lady who must try to upkeep her grace when the perk is gone.

Thai modernity is infused with the sense of nationalism too. Thailand in these stories is portrayed as a well-known, diplomatically important, nation and Thais as a desirable race, adventurous and cosmopolitan. They also reflect the Buddhist morals such as forgiveness and karma. This reminds the reviewer of Charles Keyes’ remark that Buddhism is the key to understanding Thainess. 2 This very well shows how the modern Thai identity is constructed: a mixed of modernity, nationalism, and tradition. Interestingly, Thainess is fluid, sometimes almost illogically. Via these stories, readers come to understand that people of various categories can be counted as Thai: foreigners and Chinese descendants. Particularly, in the fifth chapter, Thak traces how the Chinese Other worked their way into becoming patriotic Thais.  The question of Thainess is relevant to the ongoing political conflict today where some groups attempt to monopolize Thainess while excluding others, who may perhaps be actually more Thai than what the former imagine.

One question, however, is left unanswered. Many of these exciting and important pieces of literature have fallen into obscurity. Why so? What makes these books disappear?

My final remark is that can we read other kind of literature like Thak has done? Can we read, for example, law, until it shatters? So that we might be able to learn more about that period of transition, and the birth of modern-day Thai legal system. A similar work by Akin Rabibhadana was done by reading the Three Seal Code in order to understand the early Bangkok society and political structure. 3 Hopefully, this book, Read till It Shatters, can inspire more people to adopt such approach and read more.