Burma/Myanmar’s foreign policy and the country’s place in the world have garnered much interest recently. The country’s foreign policy has long been an instrument for asserting, contesting, denying, or conferring legitimacy, particularly following the 1962 and 1988 coups when parallel governments asserted their legitimacy against military regimes that either deposed them or nullified their popular mandate. Partial gains in normalising Myanmar’s relations with the world over a complex decade of evolving foreign policy (2010 – 2020) now face an uncertain future after the military coup of 1 February 2021. Responses from the anti-coup resistance following the military’s brutal suppression of protests highlight the centrality of foreign policy for both the junta and the pro-democracy forces opposing the coup and military rule.

This article discusses the moves by the State Administration Council (SAC) junta and the various forces opposing it in Myanmar – represented broadly by the National Unity Government (NUG) – to assert popular and/or political legitimacy using foreign policy. The article first assesses past parallels of foreign policy moves for legitimacy, then the emerging options for civilian government in the post-2020 election scenario. It concludes by assessing the uncertainties in the aftermath of the February 2021 military coup in Myanmar.

An independent and active and non-aligned foreign policy was the one constant of Myanmar’s interactions with the world in the past. This constancy and the limited foreign policy manoeuvring space under successive military/authoritarian governments since 1962 kept the country’s wider public largely indifferent (at best) and apathetic (at worst) to how the state engaged with the rest of the world.

External powers viewed the 1962 coup that first installed military rule as a consequence of Cold War era geopolitical considerations, and pragmatically accepted the regime’s foreign policy overtures. By contrast, the State Peace and Development Council (SPDC) that held power between 1988-2011 was isolated as a pariah state, causing it to turn to foreign policy and public diplomacy to seek the legitimacy that it never successfully gained. 1 The SPDC regime sought to expand external economic relations and counter sanctions imposed by the West through shoring up bilateral relations across Asia, particularly within the Association of Southeast Asian Nations (ASEAN).

The SPDC oversaw the implementation of a military-drafted constitution in 2008, barely six months after a brutal repression of peaceful protests, and shortly after the country’s rice-bowl delta was hit by the devastating Cyclone Nargis. ASEAN’s central role in coordinating the disaster and humanitarian responses persuaded the generals to open up an operating space for the international humanitarian community, and gave Myanmar government officials an opportunity to learn new ways of building capacities for change.

Likely in an effort to secure further international concessions for its efforts to “change”, the military ended then opposition leader Daw Aung San Suu Kyi (ASSK)’s on-again, off-again house arrest days after the November 2010 polls, which were the first in over a decade. To much domestic and international surprise, the military-backed, quasi-civilian government that won the election – the Union Solidarity and Development Party (USDP) – initiated a process of far-reaching political and economic transformation. This laid the grounds for the relatively free and fair 2015 elections, where the ASSK-led National League for Democracy (NLD) won a landslide victory, with ASSK becoming the face of the ruling party that formed Myanmar’s first democratically elected government in more than half a century.

ASSK continued the policy of global re-engagement that had paid dividends in the preceding years. She further nuanced this in September 2016 by emphasising a people-centred focus to diplomacy, bringing up human security issues such as labour migration, and promoting more people-to-people exchanges. A central motivation of this people-centred approach was to engage Myanmar nationals abroad towards securing their contributions to recovering Myanmar’s international “image and dignity”, in a nod of recognition for votes from overseas Myanmar citizens, the vast majority of whom supported the NLD.

This signalled a Myanmar ready to come out of its cocoon and engage the world on its own terms. The honeymoon period was brief; the disproportionate military operations against Rohingya communities following attacks by the Arakan Rohingya Salvation Army (ARSA) in 2016 and 2017 brought Myanmar under international scrutiny and ultimately to a position of “defending [its] national interest” at the International Court of Justice by the end of 2019.

International condemnations of ASSK’s decision followed, though at times these ignored the fact that the NLD government consciously chose to inform and involve ASEAN on the “security situation in Rakhine State” since November 2016, accepting ASEAN-coordinated assistance to facilitate the process of repatriating the Rohingya communities from refugee camps in Bangladesh. Previous military regimes and even the USDP government had refused to discuss this with ASEAN. Despite the Rohingya question not featuring prominently in the 2020 elections, the NLD seemed to benefit from the public’s prevailing perception that it took the fall for the military’s actions.

The November 2020 elections saw the NLD’s second landslide win. Speculation immediately followed whether ASSK would again nuance her foreign policy agenda. With Myanmar in the international spotlight over the Rohingya crisis, the NLD’s foreign policy had turned to a preference for bilateralism (although maintaining the ASEAN link) and an “Asian pivot” for investment and trade continuity.

Though continuing its commitment for an active and independent foreign policy, including an interest in “close and strong relations with the United Nations, the World Bank, the International Monetary Fund”, the NLD’s 2020 election manifesto had dropped mention of cooperation with other countries, or working together on regional issues and programmes.

Speculation on the NLD’s post-2020 foreign policy also included relations with China. Experts had expressed hope that the NLD would pursue the Myanmar-China relationship on a more constructive and less-imbalanced path. With Chinese trade and investment featuring large in Myanmar’s economic landscape, as well as China’s self-appointed mediator role in Myanmar’s peace process, this relationship had important implications for Myanmar’s interactions with other East Asian (and ASEAN) partners.

All this became moot when the military seized power in an illegal coup on 1 February 2021.

At the time of writing, Myanmar is spiralling into chaos. Any hope of reform, transition, or development and change in the country seems decidedly over, despite the SAC’s assertions since the coup that it would be business-friendly. Myanmar’s political, economic, and social crises have caused a humanitarian catastrophe in the country of a magnitude that the outside world will find hard to fathom, and even harder to respond to given the ubiquitous domestic socio-economic concerns caused by the global pandemic.

The SAC junta has sought to justify the coup at the regional and international level via its diplomats at missions abroad. Apart from the Ambassadors to the United Nations and the United Kingdom, all other heads of Myanmar missions abroad continue their appointments as SAC representatives. Yet the junta is facing almost universal condemnation for its actions since February, particularly in light of the escalating number of deaths, detentions, and daily raids and harassments. In such a situation, the world will find it ethically challenging to enter into any agreement with a military junta that is seeking to expand or resume economic activities, even if the objective is to save lives in Myanmar.

Among the most pressing foreign policy questions is which authority legitimately represents Myanmar internationally. This was prompted by an impassioned statement in defiance of the coup by Myanmar’s Ambassador to the United Nations; while he has been dismissed by the junta, he continues to be recognized by the UN at the time of writing.

The situation is less clear for the Committee Representing the Pyidaungsu Hluttaw (CRPH), which was formed in early February as an interim entity representing the elected members of parliament. In mid-April, it formed the NUG as an alternative government to cohere and coordinate the views and aspirations of various groups and ethnic nationalities across the country; in defiance of the junta, the NUG has asserted that it should be the main interlocutor for discussions with various organisations or armed groups within Myanmar, and with the international community. However, the NUG has limited options available to engage with governments, and gain recognition as an equal counterpart.

The legitimacy and recognition question reached a fever pitch in the run-up to the special ASEAN Leaders’ Meeting on Myanmar, held in Indonesia on 24 April. Senior General and SAC Chairman Min Aung Hlaing’s attendance at that meeting created an impression in Myanmar that ASEAN’s engagement of the SAC was tantamount to legitimizing the unconstitutional coup and the use of lethal force against unarmed civilians. The NUG managed to convey its views to ASEAN, however, via a letter from the NUG Foreign Minister to the ASEAN Secretary-General, shared with the ASEAN Foreign Ministers.

Even as the NUG understands the need for constructive dialogue with ASEAN, the SAC junta dominates the ASEAN space. The junta views ASEAN as a convenient platform through which to assert its legitimacy, and indeed SAC representatives have been (virtually) attending various routine ASEAN meetings.

ASEAN must assess the sincerity of the two most prominent stakeholders in Myanmar, and determine how to engage them. The April 2021 SAC “Press Statement on ASEAN Leaders’ Meeting” stated that the military would consider the constructive suggestions by ASEAN Leaders once the situation was stable, and that the current priority was the maintenance of law and order as well as the restoration of peace and tranquillity. 2[/ref] The NUG Prime Minister also issued a statement in response to the Five-Point Consensus – cautioning against the SAC’s propensity to “misrepresent facts”, and asking for NUG to be consulted on the mission and mandate of the proposed ASEAN Envoy, as well as reminding that humanitarian assistance would not solve the root cause of the crisis. Shortly thereafter, even the NUG appeared to reject the possibility of talks with the military, suggesting that neither the military nor the resistance were inclined to discuss de-escalation at that juncture. 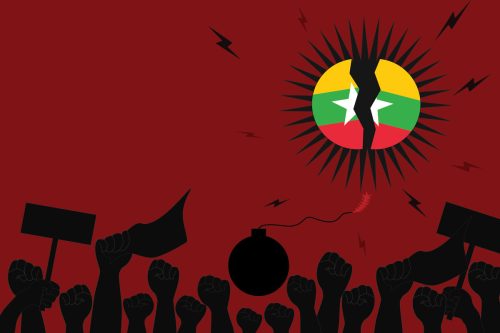 The plight of Myanmar’s people is desperate, and any hope placed in the international community’s ability to respond to the crisis in Myanmar is fading. The NUG’s calls for decisive intervention in Myanmar seem hostage to global geopolitics and domestic exigencies caused by the Covid-19 pandemic. The weak and sluggish nature of diplomacy has moved the resistance towards guerrilla tactics. The NUG’s intention to establish a Federal Union Army, starting with a People’s Defence Force (PDF) will inevitably have foreign policy repercussions. The intensifying number of incidents by local PDF chapters indicates more violence and a broader application of the term civil war to the situation in Myanmar. At the same time, intensifying clashes between the Myanmar military and ethnic armed organisations across the country (most notably in Kachin and Kayin States) may increase transnational crimes, including illicit arms trading. Covert aid for ethnic militia units, the PDF, and a future Federal Union Army also spark concerns of a proxy conflict in an already precarious context. More immediately, the number of displaced persons within the country, and refugees seeking shelter from conflict along Myanmar’s borders with Thailand or India, risk undermining Covid-19 containment and entail other humanitarian concerns.

Sadly, for the people of Myanmar, even the savviest foreign policy manoeuvring, regardless of by whom, seems unable to counter the devastating impact of recent developments.