Muhammad Radjab, an Indonesian journalist, was born in the small village of Sumpu in 1913. As the title suggests, the volume, Semasa Kecil Di Kampung is the author’s experience of a childhood and adolescence in a Minangkabau small village in West Sumatra around the 1920s. The work would be an interesting read for historians and sociologists researching social dynamics and circumstances of the Minangkabau community, which is the largest matrilineal community in the world and and one that is devoted to Islam.

For those unfamiliar with the subject matter, the book offers an excellent introduction to Minangkabau. It describes how matrilineal adat (local custom) works at the community level and how it socially affects its members with things such as the emergence of surau (small village mosque) as an educational institution or the appearance of merantau (emigration) tradition among Minangkabau people. Those readers with good proficiency in Bahasa may find this book, written in a classic enjoyable style, leading their imagination back to living among Minangkabau in the early 20th century. One part that describes the daily life of Minangkabau boys is as follows:

After learning to recite the Quran and praying Isha, young boys who were twelve years old and below returned to their parents’ homes. Those who above twelve to twenty years old were sleeping in the surau. Because in Minangkabau, it is awkward if they sleep at their parents’ house. They are also ashamed of their brothers-in-law who come back every night to their homes. (p. 22) 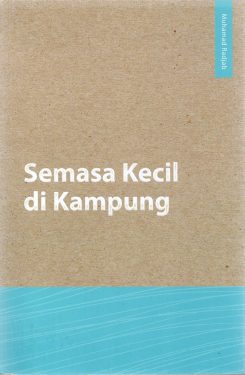 An expert reader well-acknowledged with the social discourse of West Sumatra during this period may find the book an excellent reference to recognize the degree to which the discourse affected Minangkabau villages.

Historians such as, T. Abdullah (1966) and Zed (2009), illustrated that in a robust matrilineal adat system, Minangkabau was introduced by various ideas that dynamically influenced the community. The Minangkabau religious leaders were fragmented into two groups, the Islamist Reformers, and the Traditionalists. the former was known as kaum muda (the youth group), and the latter the kaum tua (the old group). Minangkabau intellectuals with Western educational background seemed to share the same idea with the Islamist reformers. They were campaigning for what they called menyambut zaman baru (entering the progressive world). The campaign was generally concentrated in the cities and towns in West Sumatra, which were the center of education and political movements.

The book describes that contestation between the groups affected the daily life of Sumpu as small villages of Minangkabau. The author illustrates that the contestation led his small village having two big mosques. While the old mosque was a center of traditionalist forms of teachings and Islamic rituals, the new one was the center for the reformist movement. It is a kind of radical social shift since, according to Minangkabau adat, one village like Sumpu should only establish one big mosque. Fortunately, the contestation was purely “intellectual” without any intention to transform it into a physical dispute.

The author also illustrated the tension that came after the introduction of the new system of education into the Minangkabau community by the reformists. The new system aimed to teach students new skills and thinking. For several reasons, the traditionalist seemed to reject the new system (p 17–18). Some believed that the new system was useless in terms of the pragmatic point of view. People did not need this education as they could still earn money without going to school. Some opponents went further by respecting the irrational myth: people would burned in hell when going into the western educational system. But apparently, the author illustrated that there was no overwhelming rejection from traditionalists against the new school system. It is consistent with the historian’s narrative about the development of education in Minangkabau in the early 20th century.

According to the author, the traditionalists were trapped in such unquestioned tradition and old myth. He wrote (p. 167) “the traditionalists were very devoted to doing the ibadat (Islamic rituals). They obeyed every word of a shaikh (religious teacher) and would follow what was written in their old references and unwilling to criticize it. They believed and respected their shaikh blindly because they thought that God decided that the shaikh should become much more brilliant than them”. It is an example of cultural forms of religious identity, as Korostelina (2007, pp. 85–86) described. Interestingly, the supporters of reformists were not always on the contrary side. According to the author, some of the reformists’ supporters were only a group of lazy people that were not devoted to following Islamic rituals as the traditionalist did.

There are many other things described in the 23-chapter book, such as how the social circumstances of Minangkabau urged young people to emigrate, or how a group of adat leaders, of religious leaders, as well as merchants, contested to become respectable people in the community. This is much social phenomena that is brilliantly illustrated in the book.

From my point of view, the book is worth reading for both academic and recreational purposes. As a researcher on a contemporary issue of the Minangkabau community, I find this book has helped me better understand the cultural and historical background of social issues that have developed more recently.

Isral Naska
Isral Naska is a full-time lecturer at the Muhammadiyah University of West Sumatra. Currently, he is a PhD candidate at the Study of Religion Department, College of Arts, Celtic Studies and Social Sciences of the University College Cork in Ireland.