This essay considers how water policy in Northeastern Thailand (Isan) connects that region’s geography and to its people, generating, extending, and, sometimes, challenging their subordinate political identity. I argue that irrigation and damming have been essential to sustaining the uneven relationship between Northeastern Thailand and the central Thai state. Water policies have not been socially neutral, but instead link Isan’s geographical characteristics—hot and arid—to the sense that Isan people are backwards, inferior, and politically dissident (and therefore in need of stricter governance).

Isan, the northeastern region of Thailand, has 20 provinces. It is Thailand’s largest region with about 22 million inhabitants or 33% of the country’s total population. The region’s people, khon Isan, are mainly Lao speaking. Throughout Thai history they have been stigmatized as uneducated and backward due to the nationalist social hierarchies. Isan is the poorest region of Thailand with the lowest per capita income. The soil is characterized as sandy, acidic, and infertile, which makes farming difficult. Because of this, the region sends more migrant workers to Bangkok than Thailand’s other regions.

Mega water infrastructure has been sold to the region under the pretext of drought-proofing it and promoting a second rice crop. These have been key government policies in Isan for nearly a century. Northeastern politicians often sell such policies to provide water for khon Isan for better livelihoods and incomes. Nationally, the government and politicians often cast water policy as a way of simultaneously “rescuing” khon Isan from poverty and governing their politics. However, as I describe below khon Isan are not passive actors. Instead, they have continuously struggled against the government over water management and through such struggles they have often challenged their own subordination. Examination of the history of water in the region reveals how water policy not only generated the notion that khon Isan were backwards, but also became a site for khon Isan to generate new political practices. 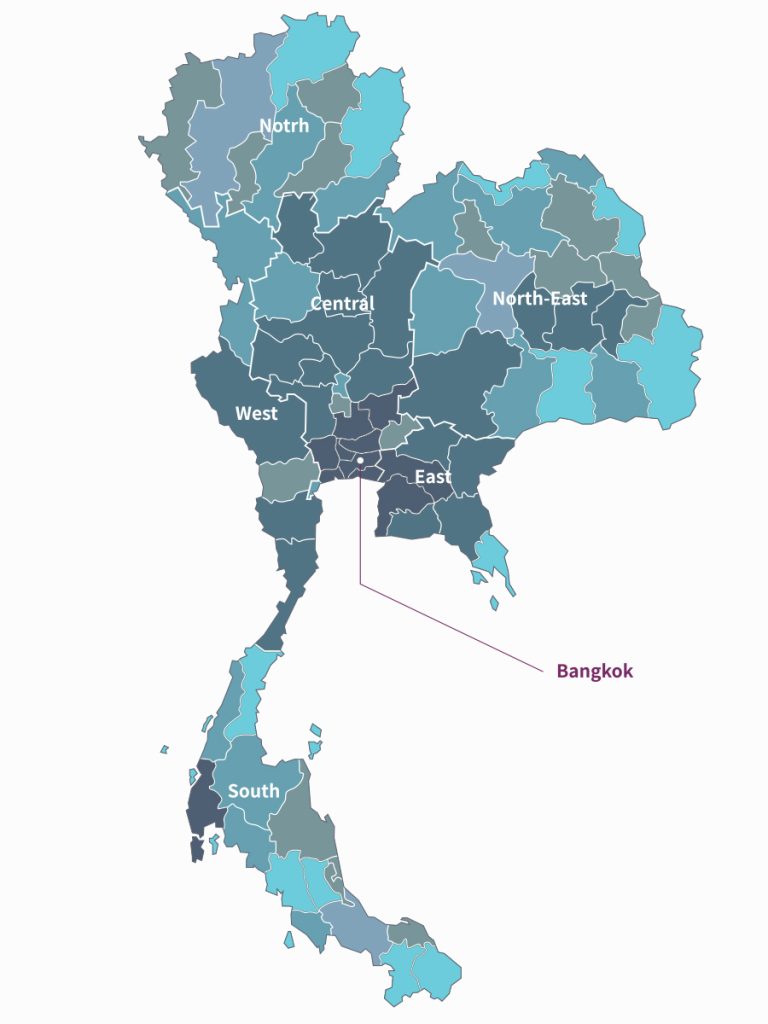 Water and the Governance of Isan

In the last 70 years, Isan has undergone rapid environmental transformation from forest to rice paddies. During roughly the same span, the central government has invested in over 6,000 irrigation projects of varying types and sizes designed to supply water to 1.2 million hectares in the region. These projects regard the region as dry and barren and in need of infrastructure to make it developed and livable.

Yet, these geographic characteristics are also political: during the period of communist insurrection in Thailand, Isan was perceived to be particularly vulnerable to communist influence due to its geography, poverty, and position bordering Laos and Cambodia. This cocktail of insecurities provided an incentive for the government to introduce a series of state-led development projects that were both political and developmentalist in orientation. With assistance from the United States, Isan was prioritized for economic and infrastructure development in the hope that this would create a buffer zone where the ‘communist threat’ in neighboring countries could be curtailed.

When Field Marshal Sarit Dhanarajata took control of Thailand in 1958, he initiated several projects in Isan. A native of the region, Sarit promoted a five-year development plan (announced in 1961) that was backed with United States funds. This included the Accelerated Rural Development Programs that were administered by provincial governors as a means of waging counterinsurgency and inducing economic transformation.

During this period, the government promoted large-scale industrial agriculture as an occupation for khon Isan. Isan farmers were encouraged to increase their yields rice through the use of hybrid seeds, chemical fertilizers and pesticides that were introduced as part of the ‘Green Revolution.’ In the context of an agrarian transition, these new farming practices helped to improve rice yields as farmers opened up new areas of land to match growing demand. They also required more water than indigenous farming methods.

Simultaneously, the government initiated hydropower projects to stimulate economic development. At a concrete level, these water infrastructure projects were justified variously as a means to eradicate poverty, provide food security, and supply water for agri-businesses. They also had important political overtones as they were designed to fight communist insurgency and to win political support. The first of the region’s hydropower projects was the Lam Dom Noi (Sirinthorn Dam) which was completed in 1971, forcing 2,526 families off their land. These families were resettled on unfertile land and got little compensation.

Currently, Isan has 17 hydropower dams with the Pak Mun Dam, located in Ubon Ratchathani province, being the latest one. Given the importance of agriculture in Isan, it is not surprising that every government that has come to power in Bangkok has placed considerable importance on water resources as a prime solution to the region’s development needs. Although large dams were proposed by the government to stimulate economic growth in the region, they were directed towards generating power for Bangkok. Damming thus extended the asymmetrical relationship between Bangkok and Isan; khon Isan suffer the effects of damming, but rarely gain any of the benefits of these projects.

The controversial Pak Mun dam worked in this way. After the dam was completed in 1994, many rapids were submerged and more than 150 fish species disappeared from the Mun river and its tributaries. Irrigation and power benefits of the Pak Mun dam have been limited. Assembly of the Poor (AoP) and The World Commission on Dams (WCD) criticized the project extensively. Proper Environmental Impact Assessments were not done before construction. Villagers in the region, who participate in both small scale commercial and subsistence fishing activities, report that they do not know how irrigation water benefits them compared to the dam’s negative impacts on the river and its resources. Local people have lost income from fishing and many joined the protests on behalf of the AoP.  These movements gathered people from across Isan, including people affected by historical projects like the Sirinthorn dam, mobilizing them in new ways. These movements generated new knowledge through Thai Baan research to inform potentially counter hegemonic policy-making. In so doing, they refashioned Isan’s environmental politics and its political actors.

The Thai government has estimated there will be a huge increase in water demand around the country will occur in all sectors. However, government reports suggest that the country is lacking sufficient available water to meet demands for water usage in rural and urban areas. Currently, water shortage is a grave crisis across Thailand, but especially in Isan.

In 2018, the Thai military junta approved a 20-year national strategy (2018-2037) to solve a redundancy of water management among agencies, to build more than 541,000 small dams, and to restore 3.5 million rai of watershed areas. Although nine provinces in the Northeast region face serious water shortages, the policy focused mainly on providing water for economic activities such as key factories while farmers have been directed to carefully plan and to grow drought-resistant crops. In 2018, one hundred and sixty reservoirs faced water shortages. Thirty five reservoirs had water stored below 30 % of capacity. Rather than limit water use in other sectors, Isan farmers were urged not to grow certain dry season crops that require intensive watering.

Similarly, in 2020 the Department of Disaster Prevention and Mitigation (DDPM) announced that twenty-five province were drought disaster areas, among which ten provinces were in Isan. The Mekong River Commission (MRC) explained that the drought situation was due to extreme climate change while NGOs reported that the Chinese dams had exacerbated and precipitated more droughts. These drought events urged the government to implement more large investments in irrigation in Isan.

The main purpose of providing water for farmers is to promote commercial agriculture resulting in most farmers adopting new cash crops, including cassava, maize, sugarcane and rubber. However, the agricultural constraints imposed by climate change and local soils are such that the cash income per farm in Isan is still estimated to be less than two-thirds of the national farming average, despite numerous efforts to improve farm viability. Hence, the government has begun promoting Isan as a “bio-economy” hub for sugarcane factory and biofuel production. These projects show how the government continues reimagine farming in the region, promising that increases in agricultural production will generate income and a better living standard for khon Isan in the process.

Large scale schemes have been continuously promoted through programs in Isan such as the Khong-Chi-Mun Water Diversion scheme and the Water Grid. Villagers in Si Saket, Roi Et, and Surin provinces, where the Hau Na and Ra Si Salai dams are located, have seen the negative consequences of these projects. There, important wetlands have been inundated severely affecting villagers’ economies over the past 30 years.

In 2009, the Khong-Chi-Mun project was reinvigorated as the “Mekong-Loei-Chi-Mun River Management and Diversion by Gravity” project. Initiated by the Royal Irrigation Department (RID), the hope of this latest project is believed to increase irrigated agriculture in the region by almost 50,000 square kilometers (over 30 million rai). This is increase of 1.72 million family famers’ income to 199,000 baht.  The RID completed a Strategic Environmental Assessment of the project in 2012. The projects proposed to diverting Mekong water in Loei’s Chiang Khan district. However, villagers’ residential areas where the diversion project would be located may be flooded. This would exacerbate villagers’ suffering from the past natural floods. Thus, the water diversion -project is being questioned by civil society organizations, NGOs and academics over potential environmental impacts on local people.

These projects and their political economic dynamics reflect the way that despite ongoing issues from both water scarcity and badly designed projects, images of the region’s arid geography and drought induced poverty continue to shape water policy and water politics in the region. They also reveal the ways that despite over a century of apparent investment, water shortage remains a critical issue for khon Isan and is likely to get worse. But more than this, they reveal that water shortage is not simply because there is no water in Isan, but because of the way that water is unevenly distributed to different regions of the country and different sectors of the economy through these irrigation plans. In this, Isan farmers are often left dry.

Isan continues to suffer from both drought and the negative effects of large-scale irrigation investment. Within the history of water policy in the region, khon Isan’s political voices and visions continue to be subordinated. Rather than being cast as central actors in the making of their region, they are seen as backwards farmers living in an arid land, awaiting state technologies to improve their lives. These images, rooted in nationalistic and hierarchical socio-political structure in the Thai society, imbue water policy with political force. Yet, Isan people have used traditional knowledge and small-scale infrastructure to irrigate their land with traditional weirs, earthen canals, and natural water sources for centuries. These small-scale water irrigation projects are environmentally friendly and effective. However, this knowledge has been ignored by the government because it is of limited political value and does not contribute to the production of industrial agriculture. Often, local knowledge is seen as irrational.

Despite this, khon Isan and their allies continue to use water to organize politically. Although the Assembly of the Poor on Pak Mun Dam’ has shrunk due to internal divisions, the New Isan movement and P-Move were established to take its place. The first group consists of diverse people including academics, students, CSOs and NGOs who work on environmental justice in the region. Both groups are acting to connect issues surrounding social justice, self-determination, decentralization, and water rights with broader questions of democracy. Issues the groups are working on include bio-economy, mining and mega water projects in the region. These movements have not yet mobilized large support, but with the broad political awakening taking place in the Northeast recently, many villagers hold out hope that things may be about to change and so too will the region’s prevailing water politics.