Tita Larasati, a comics artist based in Bandung, Indonesia, carries her black hardbound notebooks wherever she goes, and takes every opportunity to record her experiences on these visual diaries. Kid Stuff is a selection of pages and entries from these notebooks, capturing moments of her life as a wife and a mother of two. The volume also includes the short story “Then and Now,” a story she wrote and illustrated over the course of 24 hours. 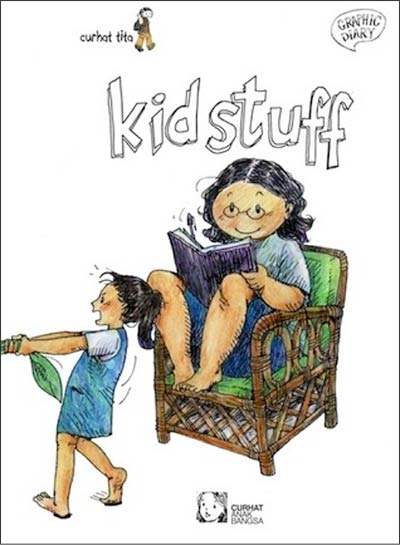 Kid Stuff graphic diary format inherently eschews a clean, structured long form narrative, opting instead for a series of vignettes. These moments, whether they’re light humorous playtime moments with Larasati’s two children, Dhanu and Lindri, or more melancholy ones such as the death of a pet turtle, have a very strong sense of reportorial immediacy, as if the author had to capture them on paper as fast as possible before the memories fade away. Much of that is owed to her straightforward portrayal of the various characters and situations, where so much of her commentary is reserved for observation of telling details, as opposed to reflection and pontification.  She allows her subjects to speak for themselves, and where possible, to speak through their actions, no dialogue required.

Larasati allows her subjects to speak for themselves, and where possible, to speak through their actions

Larasati also avoids more measured, polished approaches to art—other comics professionals indeed would take the time to plan and sketch their pages, cycling through multiple drafts on occasion—instead, she readily commits ink pen to paper, improvising and adjusting layouts as she goes along. Where other comics artists would balk at this approach, as it leaves little room for error, Larasati it seems, sees it differently: anatomical construction lines are evident underneath the cross hatches and textures, mistakes in perspectives and anatomy are flaunted rather than hidden, and dialogue is occasionally crossed out instead of covered up. What could easily have been construed as amateurish and sloppy work, however, is seen as an affectation, as Larasati’s industrial design training and illustration background is reflected in her strong technical foundations, attention to detail, and pitch-perfect body language and facial expressions. Indeed, they serve to enhance the feeling of urgency that comes with these narratives. 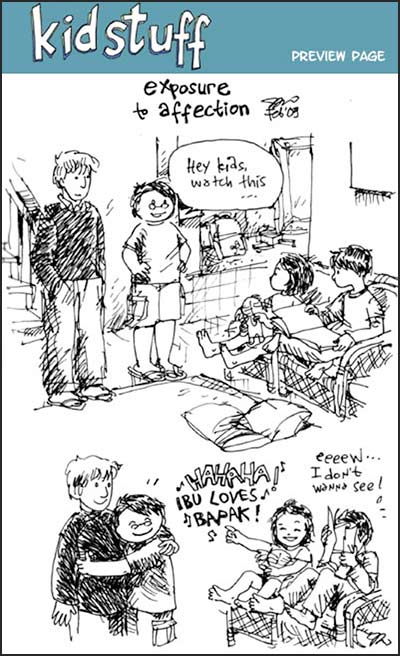 Ultimately, just as the stories in Kid Stuff open a window into her personal life, so too does her art style open a window into her process. Larasati may follow in the footsteps of other graphic diarists, including James Kochalka (with his American Elf series) and Alison Bechdel, but she is also charting her own path, and is clearly in a league of her own.