Varieties of English around the world have long been recognised as having unequal status and value when compared to dominant British and American forms (Tupas 2015). Non-standard, localised varieties of English are especially susceptible to ideological, often misconceived accusations that they possess no grammar, are a ‘bad’ form of English, are incapable of expressing complex ideas, and are unlikely to be intelligible to English speakers from other parts of the world. Such notions toward Singlish (the colloquial form of English in Singapore) are ubiquitous even amongst Singaporeans, most of whom are adept at this contact variety incorporating English, various Chinese languages, Malay and Tamil. Singapore’s government itself has always positioned Singlish as undesirable and an impediment to economic progress. Yet, in recent decades, younger Singaporeans have begun claiming Singlish as core to their national identity.

In this backdrop, Gwee Li Sui’s Spiaking Singlish offers a timely corrective to negative perceptions about World Englishes in general, and Singlish in particular. To be sure, Spiaking Singlish is hardly the first book targeted at the layperson seeking to describe the language and its associated culture. A prominent example is Sylvia Toh Paik Choo’s popular Eh Goondu series published in the 1980s. The difference is that previous attempts have always caricatured Singlish use in humorous ways, emblematic of Singaporean life. Singlish was portrayed as something that Singaporeans can laugh at, about themselves, and not to be taken seriously. Gwee’s Spiaking Singlish, on the other hand (and notwithstanding its light-hearted tone), provides a much deeper analysis of curated Singlish words and phrases, drawing relations between social life and the emergence of these localised language forms. It is not only about humour, as some self-drawn comic strips in each chapter might provoke, but a careful accounting of the history and sociopolitical context indexed by each Singlish word that Gwee painstakingly explains. Consequently, Spiaking Singlish is more than a glossary of words, and includes an outline of the linked social experience when using the language. In gaining understanding of these Singlish terms, the reader will also come to understand Singaporean life and thought. 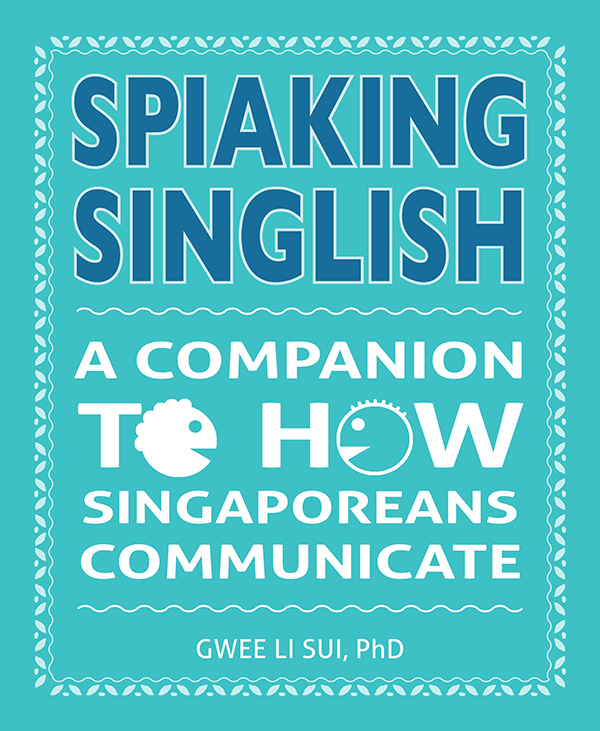 The book is ground-breaking in other respects. It purports to be written about Singlish entirely in Singlish, and is the first book to attempt such an endeavour. In fair reflection of actual Singlish use by the average individual, the careful reader will soon realise that Singlish use throughout the book comprises a constant glide between Standard English and these localised linguistic forms. In fact, Gwee readily admits this in the introductory chapter. The introduction itself provides a substantive and useful account of the book’s nature and agenda, including the status of Singlish in Singapore today.

From then on, Spiaking Singlish indulges the reader in an explanation of specific Singlish words and phrases, with each chapter being devoted to one word/phrase. Readers should not expect an exhaustive survey of all Singlish words à la a dictionary, but a selection of 45 items. One eminently impressive description pertains to the word ‘England’, which refers to ‘English’. Almost Foucauldian in his analysis, Gwee invokes Singapore’s post-colonial history, drawing attention to relationships of power between Singaporeans and Caucasians in Singapore society. The deployment of the word ‘England’ (rather than the standard form of ‘English’) by a speaker is therefore presented as a conscious sociological choice (rather than a lack in proficiency), reflecting the complex stances adopted by Singaporeans toward White persons and their stereotypical nation-states. Use of the word ‘England’ is, in effect, a microcosm of these nuanced attitudes and affectations held by Singaporeans in a given context.

Congruent with Singaporeans’ penchant for academic examinations, there is also a ‘Singlish Air-Level Test’ toward the end of the book, where readers might test their own proficiency and understanding of the words that have been previously explained. Readers ought to be cautioned that even born and bred Singaporeans might find it difficult to ace the test.

While Gwee does not explicitly state it, the book as a whole mounts a challenge to the aforementioned ideological myths regarding devalued Englishes such as Singlish. What he does express categorically is that the book is a celebration of Singish and is a culmination of his love for the language. Such pride for the language is certainly not rare in Singapore. For instance, there was considerable joy amongst Singaporeans when some Singapore English words were accepted by the Oxford Dictionary in 2016. This happiness is perhaps indicative of a desire by Singaporeans for exonormative recognition of their language use.

Far more important than external validation, Gwee’s Spiaking Singlish is thus a Singaporean attempt to recognise and be proud of Singlish as innately Singaporean. In Asif Agha’s (2007:81) terms, it is a natural, yet, key step in the continuing process of ‘enregisterment’, where performable linguistic signs (such as ‘England’ as opposed to ‘English’) become recognised as belonging to a distinct and differently valued form of language use by a population. The publication of Spiaking Singlish might very well be a definable historical moment that Singaporeans point to when tracing the development of Singlish as a language. It will be of interest to both sociolinguists, and people who want to understand how Singaporeans live and think.