Claudio Sopranzetti’s Owners of the Map: Motorcycle Taxi Drivers, Mobility, and Politics in Bangkok provides an ethnographic account of motorcycle taxi drivers in Bangkok that is unique and insightful, bringing together the daily struggles of drivers to make a living and their political struggles to overcome social obstacles and move up the economic ladders. The book is a result of years of extensive field study as part of his doctoral research in which Sopranzetti examines the lives and work of motorcycle taxi drivers, their interactions with people in the neighborhoods where they work, as well as the drivers’ economic and social conditions back in their hometowns, mostly in the rural northeastern part of Thailand. Sopranzetti’s astute observations and thoughtful analysis help readers understand the role of motorcycle taxis as transportation service providers that sustain the livelihoods in the city and their motivation to participate in and their crucial contribution to the political movements that manifest the unresolved tension of class struggles in Thailand.

The book consists of two parts “Mobility” and “Mobilization,” so entitled according to the roles of motorcycle taxi drivers in Bangkok urban mobility and political mobilization, each of four chapters, together with an introduction, Prologue, and Epilogue. Part I, “Mobility,” focuses on the critical role of motorcycle taxis in Bangkok’s urban mobility. In Chapter 1, Sopranzetti traces the historical origin of motorcycle taxis back to the early years of Bangkok’s foundation, arguing that four conditions were instrumental to the emergence of motorcycle taxis in Bangkok: powerful government officials with local influence, poorly planned transportation network, low-paid labor from the rural countryside, and affordability of domestically manufactured motorcycles. Chapter 2 brings the readers to the present, describing the driver’s nature of work and working conditions, the kinds of services provided, the skills required, and the risks involved, complete with vivid and sometimes tragic anecdotes of drivers’ relationship with their customers and people in the neighborhood as well as their ability to turn such personal relationship into rewards. In Chapter 3, Sopranzetti recounts his visit to drivers’ hometowns in the rural northeast, observing that working as a driver in Bangkok intensifies the materialistic aspiration of some drivers, while, in other drivers, stokes disdain of hedonistic lifestyles of the upper-middle class in Bangkok. Chapter 4 discusses how many drivers came to be unwavering supporters of the exiled former Prime Minister Thaksin Shinawatra, whose policy engaged the working class, specifically promoting motorcycle taxi drivers’ entrepreneurship by formally registering them as licensed operators. This was part of the wider policy to formalize previously illegal or grey businesses on which the poor’s livelihoods depend, and was considered a shield that protected them from the local mafia, thus endearing him to the majority of drivers.

Part II, “Mobilization,” turns to the socio-political conditions underlying the involvement of motorcycle taxi drivers in the recent political movements. Chapter 5 explores the response of drivers to Thaksin’s policy by organizing driver’s association to gain leverage by collective bargaining. They saw their champion’s removal by the 2006 military coup as threat to their survival, returning them under the influence of local, exploitative mafia, mostly influential politicians or military officials, and consequently threw support behind the pro-Thaksin Red Shirts movement and became staunch opponents to the military regime. In Chapter 6, Sopranzetti analyzes the drivers’ perception of the elite’s embrace of the royally conceived Sufficiency Economy principles as a mean for economic suppression, fueling the discontent, and prompting the drivers to actively oppose the military-backed Democrat Party government led by Abhisit Vejjajiva. Chapter 7 analyzes the dual roles of motorcycle taxi drivers, during the months-long anti-government protests in central Bangkok, as transport service providers and as protest leaders, providing a vivid account of the events leading up to the violent dispersion of the Red Shirts’ protest by military forces in May 2010. Chapter 8 discusses the aftermaths of the crackdown, focusing on the military’s attempt to bring motorcycle taxi drivers association under their control, causing the rift between drivers’ leaders, who were divided by their loyalty to the political ideology and those who try to remain true to their original purpose of organizing.

The Epilogue turns to the more recent events leading up to and after the military coup in 2014 that deposed the Prime Minister Yingluck Shinawatra whose Phue Thai Party defeated the Democrats in the 2011 general election. Revisiting the lives of the drivers whom he had followed before the coup, Sopranzetti acknowledges the military regime’s effective attempt to intimidate the leaders of opponents into submission, but concludes that the political upheavals are part of the wider, on-going power struggles between the traditional power and the mass of the subjugated population.

While the government’s effort in regulating motorcycle taxis have long been the subject of academic research in Thailand (Prayochvanich, 1992; Oshima, et al., 2007; Ratanawaraha and Chalermpong, 2015 ), Sopranzetti’s research on the lives of motorcycle taxi drivers and his approach to examining their roles in the making, sustaining, and disrupting urban activities from an anthropologist’s perspective are novel, and his findings can potentially inform the policy that can improve the drivers’, and more generally the working class’ livelihood and ease class tension. There are some areas of research that remain relatively unexplored, such as the complex and varied social structure, culture, and norm of the community of motorcycle taxi drivers. There exist classes within the motorcycle taxi community, full-time drivers, part-time drivers, win heads, win owners, the police, and other government officials. Although on the surface, drivers seem to have freedom (itsaraphap) (p.117), such freedom is regulated by the unwritten social norms and subject to the whim of these related parties, and the possibility of exploitation is very real. Previous effort by government to eradicate exploitation proved unsustainable due to the entrenched and unwritten code of practice of the community.

The society of the drivers is also far from homogeneous. Its rank includes the poor from the countryside, middle class employees or housewives working to supplement the primary job. In addition, the advent of sharing economy and the widespread use of smartphone enables, through the use of GrabBike or GoBike applications, ordinary motorcycle owners to become a driver, adding another group into the mix. These unregistered drivers are considered outcasts among the drivers but welcome by many passengers, thereby complicating the already tense relationship among stakeholders in the motorcycle taxi community. The success and sustainability government interventions aimed at improving the livelihoods of drivers hinges on the understanding of the complex social structure, social norm, and interrelationships among all related parties. 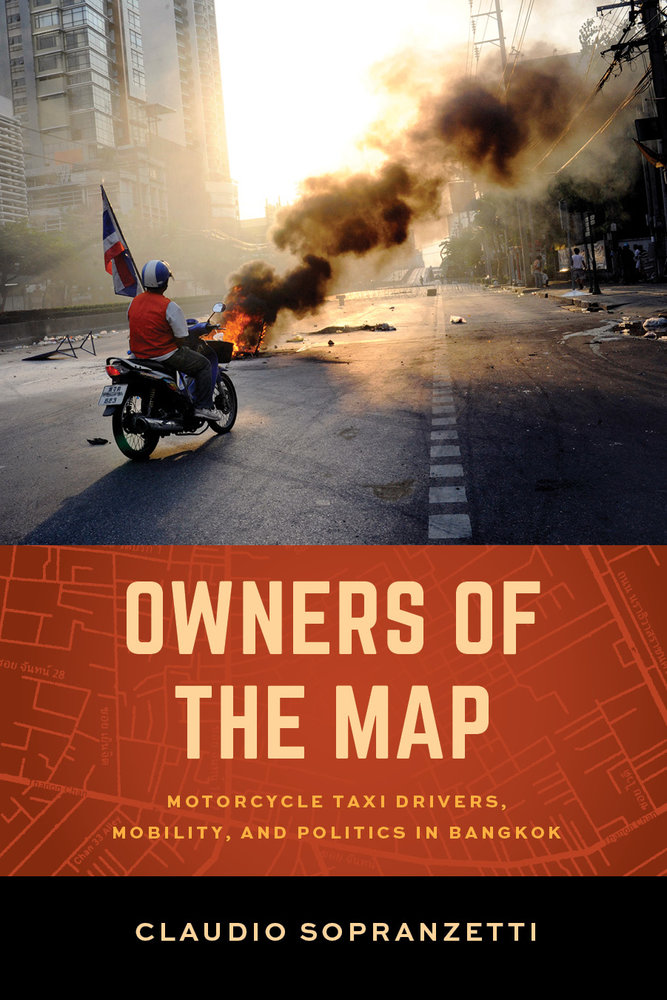 As a transportation policy researcher, I am fascinated by Owners of the Map, which presents a very different kind of academic work from the type of research with which I am familiar. Transportation planners and policy analysts aim to provide infrastructure and deliver transportation services that are safe, reliable, and affordable to the public, so transportation researchers tend to focus on the physical elements and economics of transportation systems, how they are designed, financed, built, and operated, and how the government and the private sector can work together to achieve an efficient transportation system. Some policy makers in developing countries hold negative views of motorcycle taxis, considering them a nuisance, a sign of underdevelopment and attempt to ban or control their number. (Azim Idris, 2017) Transportation researchers pay little attention to the economic situation and working conditions of the people behind the handlebars, focusing instead on how to regulate them, keeping them from obstructing traffic, driving recklessly, or overcharging passengers. Sopranzetti’s research not only highlight the necessity of motorcycle taxis as an indispensable infrastructure that enable the functioning of the city of Bangkok, but also shines light on the human side of this otherwise mechanical transportation system. Owners of the Map reveals that it is this long neglected side of the system that is the root cause of the problems related to motorcycle taxis and basing transportation policy on research with some human touch might go a long way in making many people’s lives a lot happier.

Saksith Chalermpong received his bachelor’s degree in civil engineering from Chulalongkorn University, his master’s degree from MIT, and his doctoral degree from UC Irvine, both in the field of transportation.