Based on its title, Mythbusting Vietnam: Facts, Fiction, Fantasies, would appear to be a revisionist attempt to correct and rectify the way in which we know Vietnam. Instead, this book seeks to supplement and complement our existing knowledge rather than replace and reject it. It contends that our existing knowledge of Vietnam is both incomplete and fluid.  As such, the work seeks to examine how knowledge is produced and how we arrive at certain conclusions. Knowledge, Earl contends, is socially constructed and therefore myths should be understood based on their construction. In other words, myths are not “mistakes” or inventions, but socially constructed accounts, believed by some under certain cultural, institutional, or historical contexts. It is a multidisciplinary approach in which the book’s contributors used a host of methodologies to explore the overall theme.

Section One attempts to reinterpret knowledge production about Vietnam through an emphasis on knowledge multiplication. Vietnam’s opening up in the 1990s and 2000s led to greater accessibility, and a plethora of research. Whilst this enhanced our understanding, it also fragmented our knowledge. A tendency to generalise, perpetuating and sustaining certain myths, resulted. To re-evaluate these myths, Marie Gibert seeks to enhance our understanding of public spaces in Chapter One. Public spaces intrinsically lead us to think of a democratic process as experienced in Europe. Vietnam’s iconic places produced during the colonial rule are therefore touted as Vietnam’s public spaces.  But this notion of public spaces excludes the vibrancy of urban, yet interestingly private, places such as markets or commercial centres. Gibert, applying a more dynamic public space definition, demonstrates how the role of alleyways and shopping-malls create vibrant public spaces.

Chapter Two and Three evolve our understanding of gender in Vietnam by examining the Confucianist framework for interpreting gender behaviour. The chapters challenge us to think about how we prescribe certain gender assumptions to males and females within the paradigm of Confucianism. Minna Hakkarainen even traces the evolution of these assumptions about the “quintessential Vietnamese woman.” Re-interpreting early Confucian texts, she challenges Confucianism as a static “cultural heritage.” She reveals that Confucius paid little attention to women, referencing that his attitude was reflective of Chinese cultural practices at the time. 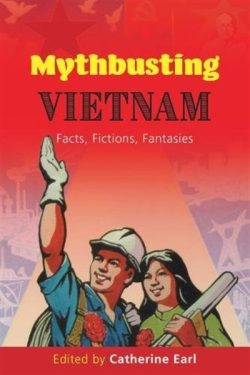 Philip Martin then challenges the myth that Vietnamese men struggle to adapt to Vietnamese women’s changing attitudes and behaviours. He argues that the myth of Confucian “masculinist” traditions has obscured the experiences of men whose behaviours lie outside of these traditions. He busts this myth by examining the experiences of six individuals in the period of Doi Moi. Indeed, Martin provides a multi-faceted narrative of men developing individual habits that contrast with pre-existing traditional norms, their struggles to conform to those norms, and to adapt to economic changes. Ultimately, knowledge of men’s experiences during Doi Moi are a much more complicated account than Confucian practices in masculinity would suggest.

Section Two seeks to delve into knowledge production as a social construct. It seeks to shift from universal claims about fact or fiction and explore the relationship between the myth-makers and sustainers. Vladimir Mazyrin and Adam Fforde explore myths around Vietnam’s role as a “Soviet-Client” in the pre-Doi Moi era. Excitingly, this new knowledge is presented via the analysis of interviews with retired Soviet experts who have firsthand experience of dealing with policy discussions at the time. In doing so, the authors reveal myths that existed outside of English based literature. It demonstrates that Soviet influence was important, yet not the determining factor.

This section also explores myths surrounding migrant workers in Vietnam, and strip away negative portrayals. These are state-sustained as well as socially sustained myths. First, Nguyen Thi Hong-Xoan and Catherine Earl demonstrate the positive role migrants play in Vietnam’s development. Migrants utilise informal social networks for support, relying very little on state support. Despite migrants’ positive impacts on Vietnam’s economic development, the negative myths are still reinforced. The authors highlight that future policy-decision making should be more inclusive and effective in responding to improving the social-wellbeing of a group so crucial to the country’s modernisation.

Authors, Ashley Carruthers and Dang Dinh Trung, probe three myths: Rural migrants are uncivilized, the village is traditional, and that being poor in the city is still better than being rich in the countryside. They show that, for migrants, city life is less humanistic and is fraught with social ills such as drinking, gambling, fighting, etc. Migrants contribute to more social mutuality by community formations and the informal benefits they bring to city life. Meanwhile, the thought of the village as “traditional” is not necessarily true as social-remittances are made back to the village via returning migrants. And at the same time, returnees often experience divergent experiences upon returning.

Section Three, entitled Fantasies, addresses how myths are perpetuated, demonstrating that this process often starts from the top and unwillingly, or unknowingly, becomes embraced indirectly.  The section contains one chapter by Adam Fforde who exams the myths surrounding the Doi Moi process. The chapter suggests that myth sustainment is evidenced through the repetition in academic reports and donor papers. Fforde’s analysis dissects a wide-array of academic work by exploring the weight of certain explanatory factors and notes the lack of sourcing and methodological errors surrounding Vietnamese reforms. He asks critical questions of the peer-review process that allows these myths to slip through cracks and thus go unchallenged.

Mythbusting Vietnam is an eye-opening read that challenges, enhances, and expands our knowledge, and indeed how we acquire that knowledge. It does not, as the title implies, seek to revise or correct what we previously thought to be true. The theme binds the different topics addressed and prevents it from becoming a mishmash of articles on Vietnam.  As a Vietnamese studies scholar myself, this book caused me to re-assess assumptions I generally thought to be complete and re-evaluate the process through which I accepted such assumptions. This book will serve anyone interested in Vietnamese studies and the tracing of knowledge production.

Reviewed by Nicholas Chapman
Nicholas Chapman is a PhD candidate at the International University of Japan. He specialises in Vietnam’s foreign policy, domestic politics, and civil society.