“Indonesia: Twenty Years of Democracy” (Cambridge University Press, 2018) by Jamie Davidson provides an in-depth analysis of Indonesia’s politics two decades after Suharto’s ousting and the collapse of the authoritarian New Order regime. A number of retrospective reviews have been published recently including in the last edition of the Kyoto Review.  Davidson, an accomplished scholar of Indonesian politics, offers up an accessible and thoughtful analysis in the form of a short readable book.

Davidson begins by pointing out a central paradox in understanding Indonesian democracy; comparatively speaking it looks strong, but viewed up close appears much weaker (p. 2).  Given the uncertainty of Indonesia’s future during the turmoil of 1998, Davidson observes that its institutions have held up admirably. On the other hand, some institutions have proved wobbly, money politics persists, inequality endures, and sectarianism has surged.

To make sense of this seeming tension, the book divides the post-Suharto period into three distinct eras: the era of innovation, the era of stagnation, and the current era of polarization. For each of these phases it explores the dynamics in the arena of politics, the economy, and society.  The organization of the book is therefore easy to follow and can be sliced and diced into nine subcategories (innovation-politics; innovation-economy; innovation-society; stagnation-politics, stagnation-economy, etc.).

The era of innovation, for example, is characterized by major and substantive political reforms.  The parliament amended the constitution guaranteeing a range of new freedoms and rights.  New election laws gave rise to new and refashioned political parties and curtailed the role of the military in politics. The parliament also passed a ‘big bang’ decentralization law that devolved substantial power from Jakarta to the local district level.   In the economy, the IMF spearheaded efforts, with varying degrees of success, to liberalize and privatize much of the Indonesian market including in the construction, banking, telecommunications and airline sectors.  Subsequent reforms also sought to institutionalize those changes through legal reform and by creating new regulatory agencies such as the Consumer Court and the Business Competition Supervisory Commission.  In the societal sphere, Indonesians began to coalesce, organize, and mobilize along identity-lines in new ways after decades of authoritarian repression.  Islamic politics emerged as a new social and political force, many Chinese Indonesians began to reassert their cultural identity in the open, and ethnic and indigenous groups on the Outer Islands experienced a “revival of tradition” embracing their cultural heritage and practices of adat. 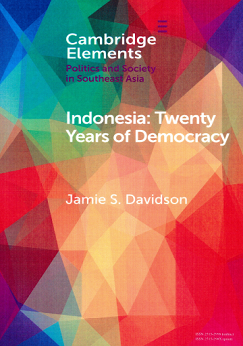 By the mid-2000s, Indonesia’s “euphoric” period of reform gave way to “fatigue and frustration” and an era of stagnation (p. 25).  Corruption continued, reforms stalled,  and major scandals affected the highest level of politics. President Susilo Bambang Yudhoyono epitomized this era with his indecisive, risk-averse and ultimately self-serving presidency. Political reforms including corruption eradication and military reform fell to the wayside and the president’s own political party (the Democrat Party) became mired in a major corruption scandal.  A global commodity boom propped up the economy’s overall bottom line, but ironically also delayed more substantive reforms.  Instead, high rates of speculation in commodities led to a relative decline in manufacturing while infrastructure and bureaucratic red tape continued to be a drag on the economy.  Economic governance also faltered as illustrated in the oil and gas sector where the state oil company, Pertamina, impeded state regulators leading to court battles. Societally, Indonesia experienced a troubling uptick in physical attacks against religious minorities.  A number of Christian churches were vandalized and burned down especially in Jakarta’s suburbs.  The heterodox Islamic sect Achmadiyah and LGBT groups were also targeted all while President Yudhoyono remained conspicuously silent.

Currently Davidson argues Indonesia is in the midst of an era of polarization. Though the seeds may have been planted in years prior, this polarization has manifested itself most clearly in the 2014 election between political upstart and reformist Joko Widodo and Prabowo Subianto, an infamous military officer from the authoritarian New Order regime who established his own political party and machinery after Suharto’s fall.  The contest turned caustic with Prabowo repeatedly attacking Jokowi and championing himself as a martial, Islamic and nationalist alternative to his opponent.  Even as Jokowi’s ultimate  victory reassured many observers and democratic reformers, political battle continued as Prabowo and other opposition leaders sought to undermine now-president Jokowi’s initiatives.  The dynamic continued in the Jakarta governors’ election in 2016 and 2017 which became a kind of proxy fight between the two camps and included blatant falsehoods spread across social media as a way to attack the reputation of candidates.  In the economy, polarization manifested itself in the tension between statism and the market economy via Jokowi’s developmentalist efforts which swung between embrace of state capitalism and market liberalism.  And in the societal realm the increased harassment and prosecution of LGBT Indonesians as well as renewed anti-Chinese sentiment often mobilized through conservative Islamic forces moved politics one direction while Jokowi’s actions banning Hizbut Tahrir, a conservative Islamic organization swung to the opposite extreme.  Even supporters for Jokowi and defenders of LGBT groups found the president’s actions unreasonable and anti-democratic.

Davidson’s overview of the past two decades is as compelling as it is elegant.  If anything, one might be tempted to critique his three-era framework as over-simplification. After all, weren’t there elements of stagnation in the era of innovation or hints of polarization in the era of stagnation?  Further, it seems a stretch to suggest that innovation, stagnation and polarization flow together in all three sectors of politics, economy and society, despite their inter-connectedness.  But Davidson is clear about complexity and contradictions. He acknowledges the strength of countervailing political forces in the era of innovation and he grants that in the era of political stagnation, much of Indonesia’s economy was whistling along.

More to the point, Davidson’s contribution is to paint a tapestry of Indonesian democracy that in his words is full of “tensions, inconsistencies, and contradictory puzzles” (p. 4).  His framework offers a useful way to recognize all the ways in which Indonesia’s political change has offered substantive and real differences while acknowledging the many problems that persist.  Said differently,  his framework is like a map.  It is not meant to be a exact rendering of reality (no map is), but by highlighting some things above others, it helps us to better understand the larger landscape.

For students of Indonesian politics “Twenty Years of Democracy” is required reading, the bibliography alone is worth its weight in gold. But the book is also for all those interested to understand the complexity and nuances of Indonesia especially on the eve of a portentous election in April of 2019.  As Davidson notes, Indonesia’s democracy, as in so many other places is an “unfinished process” and its future will be determined by its people and its leaders (p. 4). The book helps us to understand these prospects and possibilities.