Local Corruption, Local Resistance: a Glimpse of Story from Indonesia

Following the resignation of president Soeharto in 1998, Indonesia entered the dawn of democratization phase with Reformasi. Marches of students, worker groups, and individuals in Jakarta and other big cities chanted for the abolition of military’s dual-function, a message of anti-corruption, the end to collusion and nepotism (known colloquially as “KKN”), as well calls for economic recovery. Since then, the anti-corruption mandate has always been an inseparable part of Indonesia’s main agenda, encompassing democracy, good governance and civilian supremacy. The The Suharto regime’s inheritance was not only a monetary crisis, but also a wide web and deeply permeated practices of corrupt political elites at the national and sub-national levels –an intrinsic challenge that would hinder the proliferation of the Reformasi agenda. Thus, the struggle for an accountable and well-performing government is an act that is still ongoing.

In that context, Ilusi Demokrasi Lokal offers an interesting narrative on the anti-corruption campaign and advocacy for over the last fifteen years (1999 to 2014). The setting is Malang regency (which encompasses kota Malang, kabupaten Malang, and kota Batu), the second biggest city in the East Java province, with a population close to one million. The protagonist is the Malang Corruption Watch (MCW), an NGO established in 1999 by a group of students, political activists, and concerned researchers. The book is published to commemorate MCW’s fifteen-year journey in the Indonesian civil society scene; it provides an inspirational insight on its organizational struggles and ups-and-downs in such a delicate local setting.

The book is arranged into six parts, including a prologue and epilogue. Among the diverse contributors are MCW’s personnel and volunteers, journalists of local newspapers, activists and observers of Indonesian NGOs, as well as lecturers from a reputable local university. The composition of authors is testament to the extensive network that MCW has nurtured over the last 15 years. It also gives a sense of MCW’s non-partisanship in mobilizing resources for anti-corruption advocacy. The book also contains selected newspaper clippings, photos, and poetry depicting MCW’s activities, and nuance of political activism in the Malang regency. 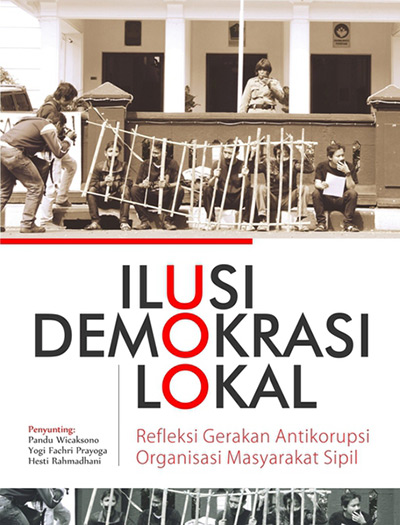 In its formative years (2000-2005) MCW would exhibit a confrontational advocacy style towards the government. Public outreach was also conducted in a formal way; its activists only conferred with the public during formal events arranged by the organization. MCW realized that this approach had drawbacks and they gradually learned how to improve their ways of garnering attention both from the local government as well as the public. They began to understand that confrontational approach was not an all-season strategy. There are moments when dialogue, facilitation and negotiation can become the strongest weapon to convey the anti-corruption message with local government. Alongside this change, public outreach was no longer conducted in such a formal way and college students and the local media became MCW’s important partners in broadening the scope of its audience as well bringing greater public awareness to its activities. They become the backbone of MCW’s dynamic existence. As such, the book chronicles the organization’s transformation; it is now becoming the hub of political activism and civic education in the regent.

What makes MCW prominent in its anti-corruption activities and campaigning in the local Indonesian setting is its commitment to cooperate with around 25 civic communities across the Malang Raya area. This cooperation is surely a culmination of years of cultivating involvement with the public. There are abundant examples of its commitment that mark MCW from a self-centric, elitist non-profit organization in anti-corruption issue into an organization which embraces membership from all walks of life: students, local merchants, farmers, and rickshaw drivers. Most importantly, MCW works as a community-orientated purpose in its functions, while at the same time, its core work on anti-corruption remains intact.

Although the book records a number of major corruption cases in Malang, it does not provide detailed information on the scope of these cases. Readers may assume that MCW as one of the prominent anti-corruption advocacy machines in the city must have abundant information pertaining to the issues. The information is essential input for readers/ scholars on comparative politics to comprehend the complexity of corruption as perpetrated by local elites and the anti-corruption movement at the local level based on these cases. Aside from that, readers could also see how MCW has performed its activities, far from serving its self-interest or supplying a one-sided narrative.

This book offers the reader a glimpse at the tremendous achievement of an Indonesian local NGO as it works on delicate issues to build the nation’s integrity and strives for a clean government. After a journey of fifteen years in safeguarding, committing to and defending transparency and democracy, MCW has developed into a very robust institution in its anti-corruption struggle. Ilusi Demokrasi Lokal is an important record for students of law, political science, sociology and also the public in general, to grasp better the dynamics of local corruption and local resistance, especially in the Indonesian contemporary context.