This collection of well-argued essays surveys the state of Malaysian political practice and provides insight into the discourses underlying it. The authors are academics, many of whom also participate in the various civil society efforts that fall within the purview of the book. The result of this dual commitment is a theoretically informed, scholarly book that is nicely focused and accessibly written, dispassionate and of real use to those who seek to understand the prospects, realities, and limitations of Malaysian democracy.

Loh poses some uncomfortable questions about the relationship between democracy and middle class society (which of course have relevance beyond Malaysia as well). He acknowledges that democracy talk has become “a significant counter-discourse,” but argues that it is seriously limited by the middle class priority of sustained growth brought about by economic but not political liberalization. Replacing the previously dominant discourse of ethnicity, developmentalism focuses on the individual—specifically the consuming individual, whose freedom, ethnicity, even identity are increasingly “privatized.” The powerful nexus of rising prosperity and new consciousness is visible in such things as credit cards and shopping malls (what to do with new wealth) and stock ownership and life insurance (how to secure wealth into the next generation). Having attained identity and lifestyle through personalized, not social, achievement, individuals are not inclined to controversial political involvement that can adversely threaten them.

It is not that the middle class is unreachable through any social channels. In fact, it is reached every day by the mainstream media which has long internalized a culture of “responsible development journalism.” Mustafa K. Anuar discusses how advertising techniques and more business news and lifestyle features woo middle-class readers and serve state interests by diverting newspapers from investigative journalism and controversy. But Mustafa notes the widespread public distrust of mainstream media during the Anwar Ibrahim crisis and the accompanying growth of an alternative press as a sign that mainstream media do not have unlimited power. Zaharom Nain turns the business focus onto the media itself, arguing that increasing concentration of ownership, combined with tightened government control (surveyed in both articles), has resulted in “more of the same” even as media outlets have multiplied. While he argues that audiences do not passively accept what the media feeds them, he is wary of approaches that assume uniform access to “alternative forms of explanation and knowledge.” Zaharom is not sanguine about alternative or new media, noting how opposition newspapers have been curbed once they attain effectiveness and surmising that internet sites have been left alone because they reach a small audience. 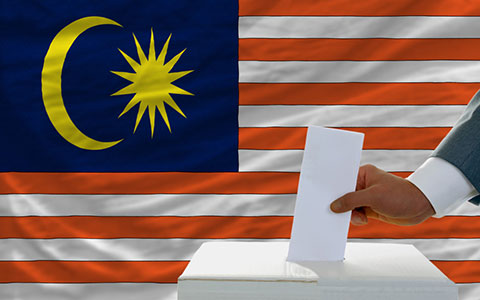 Any discussion of Malaysian democracy will have to contend early and often with Mahathir Mohamad, who has worked hard for over half a century to shape Malaysian political thinking and practice. This collection does not disappoint, as co-editor Khoo contextualizes Mahathir’s recent offensive on behalf of a “Malaysian democracy” that differs in essence from western liberal democracy. This “Asian” system is a notably passive exercise for the citizen, whose participation is invited only in periodic elections in which the choice is always framed thus: return to power the government that has delivered economic development through political stability or risk all by electing irresponsible oppositionists. Khoo locates the development of this ideology in the late 1980s through mid 1990s, amid the collapse of communism, the rapid development of Asian economies and deindustrialization of western economies, and uprisings against authoritarian regimes. Not merely a reactive discourse to thwart democratization, Khoo sees Mahathir’s ideology as “the value-spiritual-attitudinal corollary of a transfer of capital and technology …. the ruling ideas of a new class of national capitalists which the Malaysian state, under Mahathir’s leadership, has closely nurtured.”

Observers of Mahathir agree that his long-term tenaciousness is matched by pragmatism. Indeed, Saliha Hassan writes that Mahathir doesn’t bother too much about democracy, but focuses rather on “what is good for the country.” That would seem to allow at least a little space for the development of civil society NGOs, if not the political NGOs surveyed here, whose advocacy of plurality, human rights, checks on executive power, openness, and accountability Mahathir tends to see as part of the problem, rather than the solution. Nevertheless, Saliha points out that the state often does find value in allowing NGO activity, in co-opting NGO messages and leaders, and in encouraging those who support or complement state agendas. In light of the state’s strong ability to articulate positions and accrue legitimacy to itself, Saliha argues that NGO fragmentation, lack of mass base, and frequently narrow (class, ethnic, or religious) focus must be overcome in order to develop a “common social framework.”

Another self-proclaimed trait of Mahathirian government is efficiency and Malaysia can claim to do better than most of its neighbors, but there is nonetheless growing dismay with “nonfeasance and malfeasance of bureaucratic duties” by the country’s public bureaucracies. Lim Hong Hai aims to determine what accounts for the epidemic of self-enrichment, low moral standards, and mutual interference by political and non-political branches of government in each other’s realms. He argues that while ministers can control the bureaucracy, there is no effective control of the ministers. The ballot box operates, but because power has never changed hands, it doesn’t exercise the kind of check on ineffective or corrupt government that it should. Interestingly, this shows that a strong state, especially with a strong executive, can lead to the same “highly discretionary and personalized style of administration” lamented in the region’s weaker states. Lim dismisses the prospect of reform occurring through highly publicized control agencies (themselves controlled by the ruling party), arguing that it will depend on broader reform of the political system.

What is finally most valuable about this collection, beyond the strong analysis and excellent coverage, is the hint of what Malaysian democracy might entail in the future. Syed Ahmad Hussein examines the changing relationship between ruling Muslim elites and Islamist defiance of their authority within the broader context of shifts in Middle Eastern and North African dissident and government trends. For some time, the Malaysian state has been pursuing Islamization policies as a way of shoring up legitimacy and presenting a model of “moderate,” progressive Islam. As the “crisis of authoritarianism” deepened in the 1990s, Ahmad argues that Islamists moved toward a democratic critique of Mahathir’s government. The result may be an “emerging convergence” of democratization and Islam. If it continues and deepens, this trend could offer a fresh challenge to Mahathirism, which has lately found new mileage in identifying Islamists with extremism. It might also contest the “privatization of freedom” seen by Loh, for the Islamists insist on community even as the community becomes middle class and consumerist.

Most intriguing, the Islamists themselves face uncomfortable truths and opportunities if they move toward a defense of democracy, specifically, that of including the previously unincluded—women. Maznah Mohamad details the wholesale splintering of the Malaysian women’s movement among nationalist, class, and religious groupings, ethnic- and non-ethnic-based parties, mainstream and peripheral organizations. With mainstream movements beholden to male hierarchies and peripheral movements marginalized from power, women’s organizations have been quite effectively stymied. Where success has come, as in the 1994 passage of the Domestic Violence Act, it has entailed all types of women’s organizations working together on an initiative with government backing, spending as long as necessary (in this case 10 years) to arrive at consensus. That this is a highly contingent confluence is confirmed by the difficulty of building on the DVA in subsequent years. But recently, another contingency occurred with the Anwar crisis, which highlighted the role of women in politics and the Islamic opposition (PAS). As a result, the 1999 general election became an unlikely venue to push for reform, including the introduction of the Women’s Agenda for Change and the first fielding of a female candidate running on a women’s rights ticket.

Did Malaysians in the 1990s get “the government they desired,” as Loh contends? This valuable collection of essays by Malaysian social scientists provides thoughtful evidence.