For many years an essential work for students and indeed teachers of Indonesian politics, both those with a reading knowledge of Indonesian as well as those from other fields, was Herb Feith and Lance Castles’ classic text, Indonesian Political Thinking 1945-1965, published in 1970. Composed of selected extracts from the speeches and writings of Indonesia’s main political figures of the era, the book was an ideal introduction to the kaleidoscope of Indonesian political thought unfiltered by the interpretations of scholars (apart from the choice of views included in the volume). The book’s one drawback for later generations of scholars was that its subject matter stopped at 1965, the year of the abortive “coup” that led to the end of the Sukarno era, the annihilation of the Indonesian Communist Party, and the rise of Soeharto and the New Order, events that dramatically changed Indonesia’s political landscape. 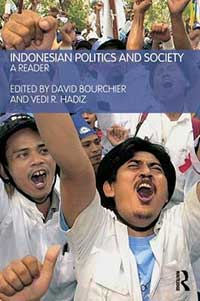 This gap in the literature, which has lasted surprisingly long, has at last been filled by the publication this year of Bourchier and Hadiz’s Indonesian Politics and Society. This book attempts to do for the Soeharto era (and the short period since his downfall) what Feith and Castles did for the Sukarno era, that is, provide a snapshot of the great diversity of political thought in Indonesia. The book is an anthology of over 80 extracts of writings by presidents, state ideologues and opposition leaders, military officers and human rights activists, lawyers and economists, poets, pop stars and artists, Muslim and Christian intellectuals, academics and journalists. In a country as diverse as Indonesia, this book goes a long way towards achieving the impossible – providing a representative picture of political thought in Indonesia.

The book is in four parts, dividing the New Order chronologically into three distinct periods: its early struggle to establish hegemony (1965-73); the height of its power (1973-1988); and the “late” New Order era (1988-1998). A fourth, briefer section is devoted to the sudden and far-reaching changes that have taken place since the downfall of Soeharto in 1998.

Whereas the Feith and Castles volume identified five distinct traditions of political thinking in the Republic’s early years – communism, radical nationalism, democratic socialism, Islam, and Javanese traditionalism – this book focuses on four distinct “streams” of political thinking characteristic of the New Order period – organicism, pluralism, Islam, and radicalism (pp. 7-8). “Organicism” (also known as “integralism”) is the term used by the editors for the idea that the Indonesian state should be organized upon the “indigenous” model of the family found in “traditional village society.” This idea was influential among early Indonesian legal scholars, especially Supomo, a key figure in drafting the Indonesian constitution of 1945, as well as among conservative sections of the military and bureaucracy, including, of course, Soeharto himself. It became the “official ideology” of the New Order. However, as Bourchier’s own work has shown (1996), the concept of the family state as articulated by New Order ideologues has its roots not so much in traditional village culture as in European and especially Dutch legal scholarship.

“Pluralism” refers both to groups that supported the New Order in its early days, hopeful of a more democratic political environment, and to critics of the regime’s authoritarian nature. While it is difficult to do justice to the broad range of political thought influenced by Islam, this volume includes the views of both “modernists” and “traditionalists,” the supporters of an Islamic state who were particular targets of New Order repression and those who advocate separation between Islam and politics. “Radicalism” groups together a broad range of views that were prominent especially among student and NGO groups from the 1980s calling for a dramatic change to the existing political and economic order. Radicalism especially reflects the influence of Marxism (which had lost its main voice following the destruction of the Communist Party) and the secular nationalism reminiscent of the era of the anti-colonial struggle, as well as environmentalism, feminism, and Islamic concepts of social justice (9-10).

Since the end of the New Order there have been many very simplistic prognostications (particularly in the media) about the future direction of Indonesian politics; these usually lack knowledge of Indonesia’s turbulent politics over the last fifty years. One of the many valuable aspects of this book is that its range of political views demonstrates not only the great changes that took place in Indonesian politics with the New Order’s entrenchment after 1965-66, but also the continuities from the Sukarno era and indeed earlier. These include a distrust of Western liberalism, a commitment to egalitarianism (influenced by both leftist and Islamic thought), a “preoccupation with unity,” both ideological and territorial, and the ongoing appeal of organicist thought (21-23). At a time when Indonesia appears to be undergoing a political transformation of a magnitude as great as, if not greater than, that of 1965-66, it is likely that many of these ideas will exert their influence in Indonesian politics for some time to come.

Many books are described as classics, but few live up to the reputation. This book is an exception. It will be indispensable for any scholar of Indonesian politics and will help introduce a new generation of students to political thinking in one of the most complex and fascinating countries in the world.