Ngô Đình Diệm was a dreamer. As ruler of South Vietnam from 1954 to 1963, Diệm aspired to greatness as a nation builder, and he was determined to find an alternative to the path taken by Hồ Chí Minh and the Vietnamese Communists. Such determination can be inspirational, and it seemed for a time in the 1950s that Diệm might turn out to be the visionary he claimed to be. Especially for his American admirers, Diệm’s unexpected success in consolidating power in the years 1954-56 confirmed his status as “the miracle man of Southeast Asia.” But dreams can delude as easily as they inspire. In Diệm’s case, initial success reinforced both his affinity for ambitious nation building and his determination to crush resistance to his rule. As he launched increasingly large-scale projects from a steadily diminishing base of political support, Diệm’s nation building became not just grand but grandiose. By the early 1960s, one of his own officials ruefully quipped, “This is a country of unlimited impossibilities!”

In Diem’s Final Failure: Prelude to America’s War in Vietnam, Philip E. Catton charts the range and limits of Diệm’s dreams by examining the last, most elaborate, and most flawed expression of his modernizing ambition: the Strategic Hamlet program of 1961-63.  Diệm has long been portrayed as either an American puppet or the hopelessly backward “last Confucian” of Vietnamese history, but Catton overturns these simplistic interpretations by arguing that Diệm’s ideas were both distinctive and “thoroughly modern” (2). Catton explodes the myth that Strategic Hamlets were foisted on a reluctant Saigon by the United States and shows that they were conceived and implemented by the Vietnamese, in particular by Diệm’s younger brother Ngô Đình Nhu. The immediate goal of the program was to fortify all of South Vietnam’s rural hamlets against the Communist-led National Liberation Front (NLF) insurgents. Yet as Catton demonstrates, Diệm and Nhu’s objectives went far beyond the anti-Maoist tactic of separating guerrilla “fish” from the peasant “sea.” In fact, the program aimed at nothing less than the complete transformation of social, political, and economic life inside the hamlets. Besides strengthening communal bonds and national loyalties, Strategic Hamlets were supposed to foster an ethos of village democracy, thus providing the foundation of a new and modern Vietnamese polity.

Had the program worked, it might well have stymied the NLF.  But Catton finds a critical gap separating the theory of Strategic Hamlets, as formulated in Saigon, from actual practice in the countryside. The Ngô brothers adopted a hopelessly unrealistic timetable and failed to provide adequate funding or guidance to the officials carrying out the program. As a result, thousands of hamlets were built in haphazard and heavy-handed ways, with little or no attention to revolutionary niceties. By mid-1963, the NLF had modified its tactics to take advantage of the hamlets’ weaknesses and the popular discontent they had engendered. The program thus became a millstone that helped to drag the Diệm regime towards its eventual destruction in a U.S.-backed coup in November 1963. 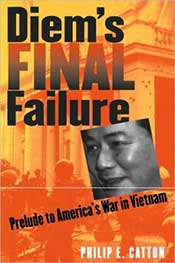 Diem’s Final Failure is a valuable contribution to the study of the Vietnam War and easily one of the best books published on Diệm. Catton is among the first foreign scholars to gain access to South Vietnamese government documents stored in Vietnamese archives, and he ably uses cabinet meeting records, secret reports, and other official sources to reveal the internal workings of a regime usually deemed inscrutable. Catton is particularly good in describing how Nhu drew on a variety of examples – both Vietnamese and non-Vietnamese – as he formulated the Hamlet program in 1960-1961. The book also illuminates the role of Americans in the program, explaining how Washington undertook to make the program fit its own notions of nation building by engaging in “competitive cooperation” to shape its implementation.

Catton is most effective in examining the origins and evolution of the Strategic Hamlet program itself, less so with larger questions about Diệm and his place in Vietnamese history. To be sure, Catton’s chapters on Diệm’s nationalist convictions and his pre-1961 nation-building programs make for fascinating reading. Still, one wishes that he had done more to connect the Ngôs to broader historical currents and to examine the specific ways in which their background and experiences shaped their ideas. While Catton is surely correct that Diệm and Nhu were influenced by “a new political consciousness” (36) current in Vietnam after 1920, he might have said more about why this consciousness inclined them toward conservative (rather than moderate or radical) forms of nationalism. For example, he notes that Diệm and Nhu embraced Confucianism and readily adopted contemporary language about “revolution” and “struggle,” but never explains how they came to invest these concepts with particular and distinctive meanings. Similarly, Catton does not consider how Diệm and Nhu’s Franco-Annamite upbringing in Central Vietnam and their earlier careers in the Indochinese colonial bureaucracy might have shaped their later nation-building policies. Finally, while Catton’s account of the decline of the Strategic Hamlet program is clear and compelling, his arguments about the implications of that decline are less persuasive. Catton suggests that the implosion of the Strategic Hamlet program in 1963 clinched the Kennedy administration’s support for Diệm’s ouster; yet it is not clear from the evidence presented here that the Americans realized, even at that late date, that the program was about to collapse. Catton’s chapter-length “case study” of the abject failure of the program in Bình Dương province does not prove the point, as Bình Dương was one of South Vietnam’s most pro-NLF areas and the program’s results there might not have been representative of the entire country.

But the shortcomings of this book are heavily outweighed by its merits, among which is its contribution to our knowledge of Ngô Đình Diệm. We have become so accustomed to thinking of the corruption and ineptitude of South Vietnamese leaders that it is easy to forget that these venal qualities existed alongside hopes and dreams that were rather less despicable, at least in their abstract form. Catton manages to show how Diệm’s dreams both fired his determination and contributed to his destruction. In so doing, he points the way towards a new historiography of South Vietnam’s republican period which neither demonizes nor sanctifies non-communist groups and leaders, but which gives them their due as important actors in the long and complex struggle over Vietnam’s national destiny.

Edward Miller
Edward Miller is a Ph.D. candidate in the Department of History at Harvard University.  He is writing a dissertation about American-South Vietnamese relations during the Diệm period (1954-1963).