Xiaoyun Zheng’s Theravāda Buddhism in China fills the academic gap on important issues of Theravāda Buddhism, one of the essential branches of Buddhism. Based on long-term field study, this well-researched book explores the dynamics, doctrine, institutions and emerging trends, and advances insightful opinions.

In the next section (Chapters 3-4), Zheng analyzes the classic teachings and main branches of Theravāda Buddhism in China. In this section, Zheng compares the differences and similarities among the branches and also especially, with branches in Thailand, Myanmar, Sri Lanka and Yunnan Province in China, which have remained relatively understudied by Chinese academia. With this comparison, the section highlights the cultural origin of Theravāda Buddhism in China and its deep influences by Buddhism in Southeast Asia. 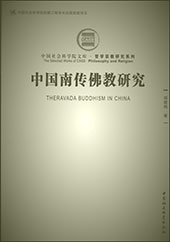 In Section Four (Chapters 9-12), Zheng analyzes the adaptability and evolution of Theravāda Buddhism in China especially when it is practiced as part of a process of social participation, such as in monastic education, monastic offerings, Buddhist Ceremonies, and charity. By addressing the charity of Theravāda Buddhism, Zheng argues that public welfare is the most effective approach for Buddhism’s participation in public affairs and in the promotion of peaceful relationship between China and Southeast Asian countries. Zheng describes one Buddhist NGO, “Home of Buddha’s Light,” whose work includes of integrating all the resources of Buddhist civil society, taking care of the HIV/AIDS victims on the China-Myanmar border, and providing special contributions to society. Zheng also notes, however, that the NGO has its own limitations, especially on the issues of insufficient supervisory mechanism and lack of personnel. In my personal view, despite its limitations, it might be the second-best solution to establish a public-private partnership among Buddhist NGOs, Buddhism civil society and governmental authorities.