Dr. Tamada Yoshifumi, a distinguished scholar of modern Thai politics at Kyoto University, was awarded the 20th Masayashi Ohira Memorial Prize in 2004 for this treatment of democratization in Thailand, which the author based on substantive empirical data while carefully avoiding the pitfall of over-theorizing.

The book focuses on the 1990s, when the threat of military coup hung over Thailand. From February 1991, the military began to take a back seat in politics and democratization made definite progress with the emergence of party politics. But by the mid-1990s, there was growing disenchantment with the way party politics was working, and people began advocating for reforms that led eventually to the enactment of the 1997 constitution, considered the most democratic in Thai history. How did this come about?

Thai researchers and public intellectuals generally point to the leading role played by the middle class, particularly beginning with the Phrutsapha Thamin Incident in May 1992. After the March 1992 electoral victory of a coalition of pro-military parties, General Suchinda Khraphrayun, commander-in-chief of the army, broke his promise and became prime minister. This precipitated a massive protest that was met by a military response, resulting in the death or injury of more than 100 persons. The military’s firing on protesters accelerated middle class-led public criticism, which eventually forced the military to withdraw from the political arena. Because of its active role in the protests, the urban middle class has since been regarded as an invaluable actor and promoter of democracy.

This evaluation of the middle class – a change from its estimation as politically marginal in the 1980s – seems to confirm modernization theory’s argument that economic growth expands urban middle classes and lays the groundwork for the expansion of democracy (pp.22-23). But Tamada calls this popular assessment an “unreal portrait” and presents an alternative account of the democratization process.

The book is divided into Part One, on the May 1992 incident, and Part Two, on political reformists and the new constitution. Its seven chapters discuss different views of Thai democratization, the causes and effects of the mass protest rallies of 1992, the decline of military power, the 1997 constitution, the 2000 senatorial election, the 2001 general election, and a conclusion on democratization.

In Tamada’s alternative portrait of democratization, the lead actor in the May Incident is opposition party leader Major General Chamlong Simuang, who successfully mobilized the masses. But since the King blamed the ensuing bloodshed on him and Prime Minister Suchinda, Chamlong’s credibility was eroded and the middle class was able to appropriate both the struggle and the leadership of the reform movement. In this it received tremendous help from the mass media, which overrated the middle class role and annointed it the vanguard of democratization. The middle class went on to support the political reform movement that culminated in the passage of the 1997 “genuine people’s constitution.” 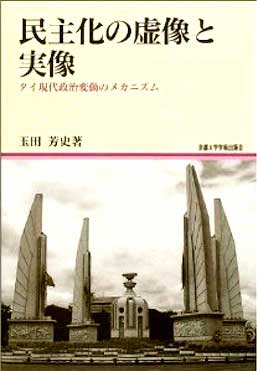 Tamada further argues that the military’s withdrawal from politics was “not due to external factors such as the end of the Cold War, worldwide democratization trends, rapid economic growth followed by collapse and urban middle class pressure, or obscure factors like a change of mind among the soldiers, but rather from personnel issues” (p. 133). He notes that the military’s tough line against the protestors originated with pro-Suchinda officials who saw the preservation of his administration as the best way back to stability. But there was opposition within the army as well, and once pro-Suchinda officials proved unable to maintain the status quo, divisions within the ranks weakened military leadership and undermined the commander-in-chief’s ability to plot another coup.

With the military withdrawing from politics and democratization progressing, the major political rivalry became that between the urban and the rural sector. The urban middle class began to call aggressively for political reform, targeting the local capitalists/party politicians who dominated national politics on the basis of votes from the populous rural areas. In the 1980s, Prime Minister Prem Tinsulanond, with support from the King and the military, had implemented a “controlled transition” to conservative democracy by winning over MPs with development fund allocations, while neutralizing leftist parties. His efforts definitely strengthened political parties: no longer was rhetorical talent sufficient to get elected; financial power became the crucial instrument. Capitalists controlled parties, parties controlled politicians, politicians controlled vote-brokers, and vote-brokers bought votes from the electorate. In this way, the political system gave the upper hand to party politicians and political stability was achieved. Whereas it had previously been said that Bangkok controlled the rural sector and regarded its people as “second-class citizens,” from the 1980s onwards, the balance of power between the two sectors was reversed.

The urban middle class, dissatisfied with this power shift and emboldened by its successful “takeover” of the lead role in the May Incident, began to criticize corruption and call for clean, efficient, and stable government. Middle class activists made up for their numerical deficiency by developing a stronger voice and turned themselves into a “civil force” by mobilizing intellectuals, capitalists, and NGOs. This neutralized the “smaller” voices of the more numerous farmers.

The movement climaxed with the enactment of the 1997 constitution. Despite being known as the “genuine people’s constitution,” it actually favored the minority urban middle class over the majority rural population. The constitution deprived 95 percent of the rural population of eligibility to run for office by stipulating that candidates must have at least a college education. It also favored the election of urban elites through proportional representation and their accession to cabinet seats by practically excluding those elected from single-seat constituencies – the majority of whom come from rural areas.

In the 2001 general election, Thaksin Shinawatra’s Thai Rak Thai Party won by a landslide. With a stable majority in parliament, Prime Minister Thaksin appointed those elected through the proportional representation system to his cabinet, making leadership less difficult to exercise. He was also able to move around personnel in the bureaucracy and the military, giving him a strong bargaining position vis-à-vis these two state institutions. The regime appeared very stable when this book was written [and has since been re-elected with a greater majority], but Tamada expresses concern that if it weakens, political instability will return. This is the “real image” of contemporary Thai politics that concerns the author.

I would like to add a number of comments from the viewpoint of a non-specialist on Thai politics. First, the author convincingly disproves the popular view of the urban middle class as a promoter of democracy in Thailand in the 1990s. In place of this “unreal portrait,” Tamada asserts the “real image” of a middle class camouflaging itself with democracy in order to usurp the leading role in the 1992 May Incident. It then proceeded to advocate clean, efficient, and stable government and to criticize rural party politicians, a movement culminating in the enactment of the 1997 constitution with its undemocratic elements. This logic is very clear and is backed up by a wealth of data.

The book also characterizes the urban middle class as a passive force against democratization and aims to explain how such passive forces were appeased. But its description of the process leading to the new constitution leaves us with the impression that the middle class was in fact actively and positively pursuing political reform. In this sense, it may be more appropriate to view the urban middle class as a group actively pushing for its own self-interest by exploiting ideological slogans like clean, efficient, and stable government.

Second, the book provides a straightforward and insightful account of some characteristics of Thai politics. Nonetheless, the statement that Thai politicians “could be blunt about [disregarding the demands of] the electorate” (p. 339) requires some explanation. Presumably, it remains imperative for politicians to respond to constituents’ everyday requests and demands, and in fact Thai parliamentarians have funds comparable to the so-called “pork barrel” in the Philippines. Those appointed to the cabinet also have the capacity to return part of their “profits” to their respective constituencies. This is probably a major reason for the high re-election rate of incumbent parliamentarians. When the author writes about a “party politics that could detach itself from the electorate in a way,” he is perhaps referring to the fact that party politicians do not translate the electorate’s demands into policy at the national level.

Fourth, the author cites as an urban bias the college education prerequisite for candidacy. It is true that this constitutional provision excludes the great majority of the rural population. However, it may not be a serious issue for local capitalists who can simply buy a diploma. It is the poor, both urban and rural, who are discriminated against by this provision.

Fifth, Tamada begins the book by defining Thai democracy as a constitutional monarchy and parliamentary system with competitive and fair elections underpinning regime change; he notes that elected members of parliament, including the prime minister, can become cabinet members (p. 17). This definition is at the core of the book’s argument. My question is whether this is how Thai people define democracy, or whether is based on the author’s deduction. In either case, the author could usefully discuss this definition in greater detail.

Professor Tamada’s book discusses Thai politics of the 1980s and 1990s so thoroughly that it should certainly be read by scholars and researchers interested in the period. What is left for future research in modern Thai politics? One topic is the Thaksin administration; another is the varieties of local or rural political situations that the author alludes to in a separate essay.

Kyoto Review of Southeast Asia. Issue 6 (March 2005). Elections and Statesmen
This review was originally published in Japanese in the Graduate School of Asian and African Studies journal ASAFAS, No. 4 (2004): 136-140. It was translated by Hosoda Naomi.