Ukkil: Visual Arts of the Sulu Archipelago is a treatise on cultural practices inextricably linked to the political, economic, and social history of the Sulu Archipelago. The author, Ligaya F. Amilbangsa, declares the need for ethnic art forms to be viewed as authentic reflections of social history. Having married into the family of the Sultan of Sulu and lived in southern Philippines for more than two decades, Amilbangsa names objects to record, as it were, the lives of the people with whom she lived. She does not engage in collection and exoticization of artefacts; she engages in recollection. The visual arts of the Sulu Archipelago recall the ancient, pre-Islamic, pre-Christian past of the Hindu-Malayan empire, a time when the Malays of Sulu were acknowledged for superior weaponry and watercraft. Pottery from Sangasanga dated 6060 BC exhibits artistic traditions enriched by the merging of the developed culture of immigrants with that of the indigenous population. A monetary economy, flourishing in the eighth century, made the Sulu Archipelago the wealthiest of settlements in the Philippines by the seventeenth century.

Ukkil enhances our understanding of early Philippine history, particularly early Sulu history. From Samal craft specialization in pottery making, boat building, metal forging, and stone carving, Amilbangsa deduces that Samalan-speaking Hindu-Malays were the earliest inhabitants of the Sulu Archipelago. In seven chapters devoted to each of the different visual arts (basketry, cloth weaving, embroidery, pottery, carving, blacksmithing and casting, goldsmithing), she links motifs and symbols to the rest of the Philippines and Asia. Motifs such as boat-coffins, which symbolize a swift and peaceful journey for the dead, are also found in Palawan, Batan Island, and Central Philippines. The bird as guide to the heavens hovers throughout Asia as the Sulu Galura, the Hindu Garuda, the Caliph’s Simurgh, and the Chinese feng. The fish represents Chinese yin-yang as well as early Christian faith and is abstracted in paisley by Muslims. The dragon, symbolizing protection from evil and misfortune, spans Hindu, Buddhist, Muslim, Javanese, Thai, Indonesian, and Chinese beliefs. Coralstone grave markers in Tawi-Tawi confirm the Samalans’ high culture and their spiritual kinship with Myanmar, Thailand, Laos, Cambodia, Malaysia, and Indonesia. 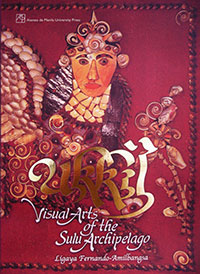 The notion of art as a special domain of creativity with the artist apart from and against society is discredited by Ukkil. In the Sulu Archipelago, the creative process is equal to the finished product; art is passed on by self-taught artisans rather than through institutions. Social creation takes place in the village plaza, on the beach or the prow of a boat, in front or back yards—indeed anywhere artists receive praise and criticism from each other and passers-by alike. Objects are created for personal use, for self-expression, and with artistic pride. The creation of a boat, a mat, or a house not only provides transport, comfort, or shelter but also satisfies the soul. Art is useful; the useful, artistic: a saruk-pata (hat) has a functional pouch on its underside; a Kuran stand is elaborately carved; spiritual beliefs are etched in dwellings, watercraft, and other art objects. As in the lives of our Asian neighbors, art is participatory, utilitarian, communal, and integral to daily life.

Amilbangsa quotes Mohammed’s praise of writing—“the ink of a scholar is more precious than the blood of a martyr”—to extol calligraphy; it may well be applied to this passionate research on the Sulu Archipelago. For example, the intricacies of cloth-weaving are exhaustively laid out: from the kind of thread used today to the technique of interweaving, the virtuosity of native weavers, and the use of the prototype tinnum (the antiquated framed or back-strap horizontal loom used by other ethnic groups in the Philippines and in other parts of Asia). The momentum of weaving leads to a discussion of finished products: the difference between antique and new handwoven cloths, the reason for the narrow dimensions of the patadjung (loose pants), the matching of the kandit to the pis. Even the description of the procedure of casting is so thorough as to include the kind of oil used: not vegetable, but lumbang. The making of rock salt in clay pots (exported in Spanish galleons such as the San Diego, found in 1991) and even of the clay pot itself is told in such minute detail as to be appreciated as art. Two full pages of this coffee-table sized book are devoted to the lepa (a Samal houseboat) in cross-section, with each of its parts enumerated. Ruing the disappearance of the garay, the sappit, even the vinta (small wind-driven boat), of ukkil in structures, of Samal pottery, of blacksmithing and casting techniques, Amilbangsa recommends that these traditional art forms be revitalized as products and processes distinctive to the Sulu Archipelago.

Photographs of the artefacts’ wealth in design and color make the book a visual feast. Substantial captions, an exhaustive glossary, and a comprehensive bibliography complete the pleasure of reading this outstanding performance of a book—a seminal text on the Sulu Archipelago and the Philippines. In fact, its demonstration of the sheer beauty of Sulu’s arts and culture demands a rethinking of the terms defining the Philippines. The image of Inang Filipinas (Mother Philippines) was based on the ilustrados’ image of a Christian God (see Ileto 1989); according to O.D. Corpuz, the Katipunan was “the first active embodiment of the Christian Filipino nation” (Corpuz 1989: 2, p. 223). At its very inception, in other words, the Philippine nation excluded Filipino Muslims. Perceiving the nation as a strategy for containment and fearing religious intolerance, Filipino Muslims thus refused to be integrated into an exploitative political and social system; instead, they turned to religion, family, patronage, and ethnie for nurturance and survival.

Yet the gentle race rooted in Asia as drawn in Ukkil contradicts the violence attributed to “Moros” of southern Philippines. The “lair of global terrorism” is not the whole truth about the Sulu Archipelago. Amilbangsa’s ink is indeed precious for its power to elicit admiration and longing for the people and the arts of the Sulu Archipelago.