Amapola, the protagonist of distinguished playwright and screenwriter Ricky Lee’s novel, is a female impersonator who discovers that s/he is also a manananggal, the fabled viscera-sucker of Philippine myth and lore.

With her pliant tongue, bat wings, and detachable torso, the fearsome manananggal normally preys on pregnant women and their fetuses. Human by day and aswang (evil creature) by night, she can be vanquished only with salt, garlic, and whiplash made from the tail of a stingray.

But Amapola is something other than the proverbial monstrous-feminine force of nature. A syonggol (baklang/“gay”manananggal), she is neither man nor woman, human nor animal. By making a conscious decision not to eat people, s/he distinguishes herself and her kind, the Tungkab, from her man-eating brethren and sistren, the Kagumay. And have we mentioned that Amapola has multiple personalities, sharing a body with “macho” Isaac and wallflower Zaldy, and later on (far less amicably), amoral Kagumay Montero?

More, past erupts in the present and present heralds the future. The year is 2010, the time of Typhoon Ondoy and the Philippine general election. A time-traveling manananggal named Josefa (Sepa) suddenly materializes out of a toilet bowl in traffic cop Emil’s bathroom. This angel/demon of history had fought alongside Katipunan founder and national hero Andres Bonifacio, for whom she nursed an unrequited love, during the Philippine Revolution of 1896. Still mourning the ill-fated Supremo, who was assassinated by members of the rival Filipino revolutionary faction loyal to President Emilio Aguinaldo, Sepa exhorts her great-granddaughter Amapola to search for a long-lost sister, Mira, and upon learning of Mira’s untimely death in a plane crash, assume herself the role of the One (Itinakda) who will save their country from poverty, corruption, and the predatory Filipino elite.

Amapola struggles with her own ambivalence and sense of hopelessness and despair over the parlous state of the republic:

It’s enough to drive one crazy! Is this the Philippines that Granny Sepa and Emil want to save? Save from what, if it won’t even save itself! These people only want to eat, shit, take Glutathione, and then go to weekend markets, go malling for the free air-conditioning, send corny jokes over mobile phone, cut in line for rice, and hope to get lucky in the lottery or on TV! If there is a storm or an earthquake or whatever problem, they will put up a fight, but then give up easily and forget, or else migrate abroad! I’m not betting on this! I refuse to be a manananggal! I refuse! I refuse all! 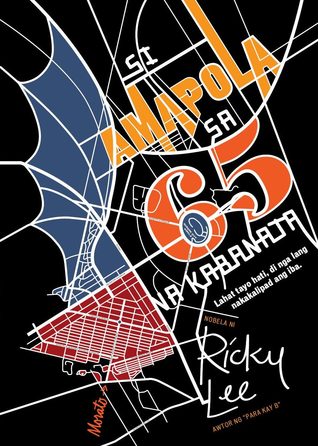 Overcoming her qualms, Amapola reinvents herself/himself as a Superhero activist-revolutionary. She dons red sequins, wigs, and a mask, and metamorphoses into the winged crusader Grandiosa, whose mission is to rescue those in distress, protect the weak, and dispense justice on behalf of the oppressed, while also fighting for the rights of the marginalized, whether human or aswang.

While Lee’s first novel, the bestselling Para Kay B (O Kung Paano Dinevastate ng Pag-ibig ang 4 out of 5 sa Atin) [For B (or How Love Devastated 4 out of 5 of Us), 2008], explored the intricate permutations of desire and intimacy in a series of interlinked stories, Si Amapola paints a vivid portrait of its reluctant hero(ine) on a broader canvas in which past and present, public and private, politics and culture intersect.

Set in the Morato District in Quezon City, where rich and poor, officials and criminals meet and mingle, and home to the best bookstore in the country but also to restaurants and bars and massage parlors, the novel is fearless in marrying demotic speech—particularly swardspeak (gay lingo), with its hilarious, often ironic, mixing and appropriation of Philippine languages, English, Spanish, Japanese, and others—to ethical debate. Not since Jose Rizal’s Noli me tangere and El filibusterismo has a comic novel probed so deeply the heart and viscera of politics and the imagination in the Philippines.

Si Amapola ranges widely across the Filipino landscape, offering a memorable cast of characters: indomitable, donut-chomping Sepa, taking Bonifacio with her on a ride in the night sky; faithful Nanay Angie, who stood by her adopted child through all his/her personality and career changes; stalwart Emil, devoted fan of Superstar singer and actress Nora Aunor, surrounded by his extensive collection of memorabilia and dreaming of his idol’s return from exile in America; vengeful Giselle, saddled with an abusive family and finding love in the arms of an Isaac who is present to her only intermittently and then gone forever; and self-righteous Trono, who becomes president on the basis of a campaign promise to “clean up” the country, but whose war against poverty and corruption also entails purging the country of “deviant” elements such as aswang and homosexuals.

Amapola’s crusade would culminate in an uprising of sorts, as an alliance of aswang (now organized into a new Katipunan) and progressive elements take to the streets in a public march, only to be met by soldiers and Aswang Patrollers who open fire—and pour tons of salt—on the demonstrators.

Great-grandmother Sepa experiences what it is like to die a second time for one’s country, while Amapola learns that the longing for unity—whether of self or nation—comes at a stiff price. For if the self is fundamentally “divided” and consciousness “split,” how much more the Philippine “nation”, with its fissiparous and centrifugal tendencies; its economic, political, social, regional divisions; its history of “betrayals” by its own “people”?

Lee handles the fraught relationship between self and nation with deft aplomb and humor. A manananggal is arrested for being a “flying voter” (a person who votes more than once at a given election by registering multiple times). Amapola likens the pain of splitting her upper body from the lower half to the battle between the government administration and the opposition: “At parehong hindi sumusunod sa rules!” (And both don’t follow the rules!) And Giselle’s English is compared to bad roads: “Parang kalsada sa Pilipinas ang Ingles in Giselle. Bako-bako at laging under construction” (Giselle’s English is like Philippine roads. Uneven, riddled with potholes and always under construction.)

In this richly imagined world where humans and aswang confront the challenge of coexisting peacefully, Lee invites us to step through a door at the back of the 17-11 convenience store and enter Heaven Eleven, where manananggal can shop for powdered chicken blood, frozen liver, phlegm in sachet packs, aswang saliva for one’s gastritis, and electric brushes for cleaning the tongue, and where the dream of a Philippine society built on tolerance and social justice remains alive, if maddeningly elusive.