In this truly pioneering exploration of the history of Muslims in Cambodia, Philipp Bruckmayr presents his readers with a richly detailed account of religious and cultural change within Cham and Malay communities in the country since the nineteenth century. He orients his discussion of these historic transformations around the concept of a ‘Jawization’ of Islamic traditions, and the ways in which this has facilitated the integration of local Muslims within a broader world of Islam stretching across Southeast Asia and beyond. Bruckmayr defines Jawization as comprising a number of inter-related components, including: “connection to transgenerational networks of jawi learning… along with the extensive use of Malay jawi teaching materials and the turn towards jawi script for writing Cham” (141).

While the prime referent of Jawization is to changes in language and script toward the increasing prestige of Malay written with a modified Arabic script (jawi), it has historically brought with it an entire constellation of new sources of religious authority. This includes a canon of textual references in both Malay and Arabic, and networks of scholars and institutions that promoted the study of these texts. As a result of Jawization, understandings of Islam in Cambodia developed in dynamic interaction with centers of religious learning in Pattani, Kelantan, and Mecca. Through these transregional connections in the nineteenth and twentieth centuries, moreover, the curricula of religious education studied and taught by Cambodia’s Muslims also came incorporate texts produced in earlier centuries in other parts of the region and beyond including Kalimantan, Sumatra, and the broader Indian Ocean world’s shared traditions of Sufism and Shāfiʿī jurisprudence. While noting the important roles played in developing the canon of Jawization by prominent ulama from outside country – including Aḥmad al-Paṭānī, Tok Kenali, and Yūsuf Saigon al-Banjārī – Bruckmayr also presents Cambodia’s Muslims as active participants in these networks of Islamic scholarship, and not simply as passive students of scholars at more well-established centers. 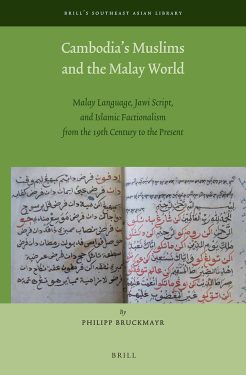 Over the history that Bruckmayr traces in this book, dynamic interactions between local Muslim communities and currents of religious reform moving across multiple trans-regional vectors shaped shifting configurations of intra-Muslim factionalism. In his treatment of these developments Bruckmayr goes beyond simply a typology framed by doctrinal debates to instead critically interrogate the construction of overdetermined categories such as those of Cam Bani migrants and communities of Chvea and ‘New Cham’ (cam baruw), proponents of kobuol v. trimeu, or kaum muda v. kaum tua sectarian positions. He is thus able to reveal the complex ways in which the alignments of particular communities indexed distinctive forms of social organization, as well as of differences of language, script, and authoritative formations of doctrine and practice. Throughout this focus on intra-Muslim dynamics, however, the author does not neglect the consequences of nineteenth-century colonial reconfigurations of power in the country (67). He recognizes that Muslims were not the only agents of change driving Jawization in Cambodia and provides keen insight the complex roles that European scholars and administrators played in this story – including a description of the way that Qur’ān schools served as “colonially accredited agents of Jawization” (114).

Through his insightful explorations of this complex history, Bruckmayr invokes comparison with, and provides new critical interventions into conversations on analogous developments in other parts of the Muslim world over this same period, ranging from Swahilization in East Africa to examples better known to Southeast Asianists including the history of wetu telu and waktu lima communities of Muslims on the Indonesian island of Lombok, and the Santrization of Java. With reference to the last of these cases in particular, Bruckmayr draws on Ricklefs’ work 1 to highlight not only structural similarities of the ways in which broad cultural changes were linked to the expansion of Islamic religious institutions, but also direct links to overlapping networks of the broader jawi world through expanding publishing networks for Islamic texts in the Pasisir and the Straits Settlements.

The author’s command of a rich assemblage of primary source material is evident throughout. His critical engagement with relevant secondary literature, however, is not on quite the same level. Perhaps the most striking indication of this is visible in his references to Francis Bradley’s work on Pattani networks of jawi scholarship. This material is of clear import here, with considerable overlaps in both time and space, as indeed Bradley himself had pointed out specific pathways of connection between Pattani networks and the Muslim communities of Cambodia from the mid-nineteenth century onward. However, Bruckmyer’s references to Bradley’s work are few and those that are found here are to Bradley’s 2009 University of Wisconsin dissertation, rather the revised and updated discussions in his book, which has been out since 2016. 2 Looking beyond specifically Southeast Asianist literature, Bruckmayr’s work also holds considerable potential for constructive interventions into broader current conversations about language, authority, culture, and Islam that is unfortunately not realized here. Readers are thus left on their own to see consider what his detailed and nuanced treatment of this rich material on Cambodia’s Muslims might contribute to our evolving understandings of vernacular literary traditions and contestations over the definition of Islamic religious authority.

Beyond these secondary level criticisms of more theoretical engagement, however, there is one significant flaw in the production of the book that needs to be mentioned. As many of the toponyms used may be unfamiliar even to scholars specializing on the history of Islam in Southeast Asia, including a map in this book is clearly important. Unfortunately, however, the Wikimedia Commons map reproduced in the front matter (x) does not identify the locations of a number of the key places discussed over the chapters that follow it. This unfortunate feature may cause frustration for some readers who may need to consult other maps to better visualize the spatial dimensions of the fascinating and otherwise unknown history that Bruckmayr presents in this groundbreaking work. If this important study will be issued in a second edition at any point, it is hoped that a more precise map could be included to help readers better understand and appreciate the important contribution that Bruckmayr has made in this excellent book.