Dominic Sy’s A Natural History of Empire: Stories, composed of seven short stories, is the inaugural awardee of the Kritika Kultura / Ateneo de Manila University Press First Book Prize in the Philippines. The First Book Prize aims to provide emerging authors who have yet to sign a publication contract with the chance to have their first book published by AdMU Press. This book, then, promises to introduce a new voice in Philippine literature and it does not disappoint.

The first story, “Prolegomena,” focuses on a young man who becomes witness to activist protests and forums that memorialize the history of resistance to Martial Law and continued state suppression. But this experience is contrasted with his future as a writer who would write many manuscripts that fail to be published; a failed marriage; shifting careers as a teacher, employee at a publishing company, and call center agent; and his estranged relationship with his daughter. As the title suggest, the story sets the themes that the collection tackles—particularly the importance of history and remembering in the ideological battle for the political future of the Philippines and the role of the writer or academic within the academe and the wider society.

“The Fingers of Sta. Juana” is possibly set during the Spanish colonization of the Philippines in Cavite, though this can only be inferred through details of the story. It tells the story of Vicente Mangubat and his confrontation with Tomas over the affections of Pacita. But what could be just another story of jealousy and betrayal becomes a more mystical story because both Vicente and Tomas have touched the fingers of Saint Juana and melded their consciousness. 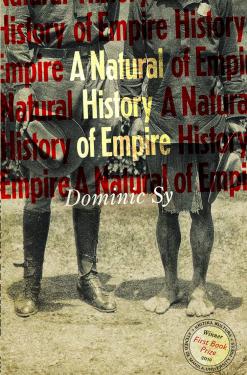 The title story, “A Natural History of Empire,” follows Captain James Liddell, an American soldier stationed in the Philippines during the early years of American colonialism, and his attempts to suppress the Katagalugan, a rebel group branded as “bandits” and headed by Julio Manatili. He is instructed by the Governor-General himself to enlist the help of a former rebel named Maximo Rodriguez to find Julio Manatili. Though Liddell succeeds in thwarting the revolutionary threat of Manatili and his rebels, the story ends in unease for him as other revolts pop up elsewhere in the Philippines and the potential of nationalist revolt remains as long as the story of Philippine emancipation remains alive in the hearts and minds of the people.

History as a narrative or story has the potential to liberate people from their ideological shackles. But the other stories in the collection are also critical of the use of history to oppress, as can be seen in “Some Quiet Conversation.”

The most traditional of all the stories in the collection, “Then Cruel Quiet” revolves around the birthday celebration of Samuel Gregorio’s mother. Samuel’s family is a microcosm of Philippine society torn between opposing camps. Samuel’s father is an loyalist to the fascist dictatorship of Ferdinand Marcos while Samuel’s brother, Christian, is an activist critical of the abuses under Martial Law. The power of history at the personal level can be seen in the conflict in “Then Cruel Quiet” between the conservative and pro-Marcos Mr. Gregorio and the progressive and activist Christian. Both have their own interpretations of history, particularly, of the Martial Law era (1972-1981) in the Philippines. On the one hand, Mr. Gregorio sees it as a golden age and views the present as a fall from those times. On the other hand, Christian sees it as a dark age that the present continues to struggle with. Both interpret history differently, causing conflict within the Gregorio family.

The most formalistically experimental of all the stories, “The Agonies of Fray Salvador” mimics an academic paper about the extant manuscripts of Fray Benedicto Salvador, a Spanish Dominican friar assigned to the Philippines. The story tries to interpret the manuscripts that Fray Salvador left while he was in the Philippines and attempts to connect these manuscripts to the historical context of Spanish colonialism in the Philippines by way of the jargon-heavy language of “critical theory.” The footnotes cite fake articles written by real Filipino academics like Zeus Salazar and Vicente Rafael. But the main conflict of the story, which can be found in the footnotes, is dominated by the debate between the author of the article, a Dom Sy, and Peter Hua, the author’s colleague, who also wrote about Fray Salvador’s writings and their historical importance. Dom Sy acknowledges the importance of colonialism, and the writings by the likes of Fray Salvador, in understanding Philippine historical consciousness. But, on the other hand, Peter Hua admonishes Dom for giving too much attention to friars who were part of the Spanish colonial mission and instead focuses on “the hordes of the voiceless” that were silenced by history. Their debate reaches an impasse and the life of Fray Salvador itself seems to become a footnote in history.

“Some Quiet Conversation” tells of the interview of a young woman journalist with Isabela Alonza, a retired historian and academic. Alonza was part of the team of academics who did research for, and wrote, the Philippine government’s monumental series of history books, a veiled reference to the ghostwritten Tadhana history books that were published under Marcos’ byline. Alonza was proud of her work at the National Library, just as, in real life, most of the writers and researchers who worked on the Tadhana project were proud of their work (Salazar, 1992). But Alonza also reveals that she unearthed in the National Library archives a German manuscript that describes a Visayan village that uses a language with no nouns and also has a political structure very different from the barangay. With the permission of her immediate supervisor, she takes home the manuscript to vet its authenticity. Her story turns much darker as she encounters an intruder in her home whom she kills and secretly disposes of in the Pasig River. The story highlights how the work of historians was used to prop up and create the historical, cultural, and ideological foundations of the Marcos dictatorship. And the discovery of a manuscript that shatters the historical foundations of Martial Law poses a possible existential threat to the dictatorship. The story critiques the complicity of the academe not only in perpetuating a fascist regime, but also in silencing alternative interpretations of histories. And in the age of fake news and the revival of fascist violence, the story can also be interpreted as a reminder that historical revisionism is part of the ideological battle not just between opposing political camps but also within a person’s psyche and memory.

“Before the Fire” is set in March 2016, a month before a fire gutted the famed Faculty Center of the University of the Philippines-Diliman. The narrator, also named Dominic Sy, is visited by his dead friend Christian Gregorio, who was returning non-existent books that were supposed to be owned by Dominic. They eat at a nearby food stall. Here, Christian shares the story of a rebel who came from an alternate universe where the Philippine revolution of 1896 succeeded and impelled the rebels to continue fighting for change in their world. After eating, Dom and Christian part ways. The only proof of Christian’s visit—the box of books that he returned to Dominic—would be burned a month later. Though this last story is set before the tragic burning of the UP Faculty Center destroyed actual rare manuscripts and books accumulated over years of research by the UP faculty, it has a more hopeful and optimistic view about the academe, in general, and the role of literature, in particular. Though one can use literature as a way of escaping reality or as a way of indoctrinating the readers, the story of the dead Christian Gregorio posits a more liberating view: that literature can give hope to its readers and promise a better world to strive for. And it is inside the walls of academe—compromised and complicit though the academe may be with oppressive political forces—that a space where the dead can come back, not to haunt people but to offer a way towards the future, is created.

The genre of many of the stories in A Natural History of Empire can be hard to pin down. Is the story historical fiction? Is it fantasy? Is it postmodern historiographic metafiction? In any case, the influences on the book stands out. One can see Jorge Luis Borges, who also had a penchant for citing non-existent books alongside real authors in his short story “Tlön, Uqbar, Orbis Tertius.” Borges’s short stories, like “The Circular Ruins” and “The Other,” repeat the trope of the uncanny other or double, which can also be seen in the “Some Quiet Conversation” and “Before the Fire.” In “A Natural History of Empire,” one can also draw some parallels with the short stories of Rosario Cruz Lucero—“The Death of Fray Salvador Montano, Conquistador of Negros” and “The Courtship of Estrella”—and her tendency to subvert the dominant colonial historical narratives in the Philippines by highlighting the perspectives and voices of both the colonizer and the colonized. The artistic convergence with Gina Apostol, who happens to be the judge of the Kritika Kultura / Ateneo de Manila University Press First Book Prize, and her The Revolution According to Raymundo Mata can be seen in “The Agonies of Fray Salvador” with its debating footnotes and textual parody. Sy melds all these influences to create a set of stories that both challenge and delight the readers. Admittedly, the stories in this collection can be difficult to read as Natural History takes pleasure in making narrative paradoxes and twists as well as expecting the reader to be familiar with Philippine history and even the work of Filipino historians. But if one can handle the erudition, the reader will be rewarded with stories that are layered and dense, stories that offer new understanding even after multiple rereading.

Though written in different styles and modes, Philippine history pervades the collection, both as a theme and as a problem to be pondered. Sy critiques the dominant discourse on the colonial history of the Philippines under Spain and the United States and even the official nationalism espoused by the Philippine state, especially the one made by the Marcos dictatorship. He shows how history—both as a social experience and as an academic discipline—can be an ideological battleground for the soul of ordinary Filipinos and a moral bedrock for academics to stand on. And this, I believe, is the contribution of A Natural History of Empire—it forces us to rethink and reexamine our relationship with history and literature especially in the current climate of state oppression. With state oppression on the rise—as can be seen in the passing of the Anti-Terror Law, the country’s largest television network ABS-CBN being taken off the air-waves, cyberlibel convictions being meted against online journal Rappler CEO Maria Ressa and former researcher and writer Reynaldo Santos, Jr., and militaristic responses against the COVID-19 pandemic—one can be forced into despair by the feeling of historical déjà vu that the current historical moment in the Philippines evokes. History can feel like a curse during these times. But much like the dead coming back to tell their stories, A Natural History of Empire paves the way for us to continue striving for a better future, a future that seems to be dead, yet continues to beckon us from the void, calling forth the readers, so that it may be revived and reborn.

Christoffer Mitch C. Cerda is an instructor at the Filipino Department of the Ateneo de Manila University. He teaches Philippine literature, pop culture, and creative writing. He recently completed the degree of Ph.D. in Philippine Studies at the University of the Philippines-Diliman.