This edited volume represents the latest important update to the study of problems of Philippine economic development. Written with depth by highly respected authors, the book is a comprehensive review of the various aspects of the Philippine economy. There is an extensive introduction by the editors, as well as a chapter on political economy by Emmanuel de Dios and Paul Hutchcroft, an American political scientist whose Booty Capitalism is now standard reading in Philippine political economy. The rest of the book’s chapters are devoted to policies and challenges in three major dimensions: macro, sectoral, and social.

The classical problem of Philippine economic development, often called the Philippine development puzzle, is the search for explanations for the country’s weak long-term economic performance despite initial superior endowments and characteristics. The editors pose this problem in their introductory chapter and review some of the numerous attempts to solve it. Drawing from those offered by economists, political scientists, and sociologists, they present three sets of hypotheses that are not mutually exclusive. These include: conventional growth explanations, bad luck, and political and institutional barriers to good policy. The authors do not discuss culturalist social explanations (as represented by James Fallows’ damaged culture hypothesis) or state-centered views that depict the Philippines as controlled by some internal or external force.

The book proceeds smoothly to the chapter on political economy, which traces the historical evolution of a national oligarchy and the weakening of political and government institutions vis-à-vis particularistic interests. De Dios and Hutchcroft conclude that “there is no size of government that is immune to damage from rogue elements thrown up by an unsophisticated political process. More fundamentally, therefore, it is essential to improve the overall performance of government, insulate it from the plunder of oligarchic groups, and promote new types of private sector initiative.” Specifically, the authors recommend strengthening the judicial and law enforcement systems and political and bureaucratic institutions. These improvements would address social demands for law and order as well as facilitate linkages between policy and implementation to meet the challenges of poverty and global competition. 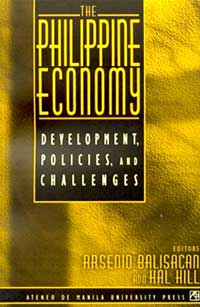 The following chapters try to complete the reform agenda that the book advocates. References to weak and ineffective political institutions, excessive government intervention, loose regulation, political dynasties, etc., indicate the growing recognition of political and institutional requirements for economic growth. Furthermore, the authors recognize previous policy mistakes and laxity in controlling inflation, peso depreciation, budget deficits, and unemployment. To correct these problems, they agree on the notion of redefining government roles with respect to the market, social welfare, the environment, the Central Bank, and the international arena. Starting with macroeconomic policies, the book demonstrates how previous regimes of government intervention have contributed to a rising inflation rate and peso depreciation. Maria Socorro Gochoco-Bautista and Dante Canlas’ keen analysis of monetary and exchange rate policy reveals that up to 1990, inflation was linked to external shocks and excessive peso printing in order to finance government budget deficits. This in turn caused the peso to depreciate even in a fixed currency-exchange rate system. For most of the 1990s, inflation was successfully controlled, and the authors hint that Central Bank independence from national government enabled it to respond more effectively to external shocks and excessive government spending. The authors, however, see it as an ongoing challenge to control the peso depreciation that causes inflation.

At the same time, Gerardo Sicat and Rahimaisa Abdula see the need for more effective fiscal management to correct perennial budget deficits. They see these deficits as a major cause of previous bouts of double-digit inflation and peso depreciation. Additionally, they call for more effective revenue-generating programs through stronger tax administration and privatization. Romeo Bautista and Gwendolyn Tecson suggest that the problem of poor government revenue could ultimately be addressed through rapid economic growth achieved by raising the efficiency of firms and industries, granted relative political and macroeconomic stability. The authors argue for more economic openness to achieve accelerated growth with equity.

In the third part of the book, a chapter is devoted to each of the sectors – agriculture (Cristina David), industry (Hal Hill), and services (Ma. Joy Abrenica and Gilbert Llanto). These chapters call for establishing more effective regulatory and less-interventionist regimes.

The final section of the book addresses social and environmental concerns: Arsenio Balicasan covers poverty and inequality; Rosario Manasan and Shiladitya Chatterjee analyze regional development; and Ian Coxhead and Sisira Jayasuriya present the state of the environment and links between environment and development. Alejandro Herrin and Ernesto Pernia’s chapter on population, human resources, and employment notes the remarkable growth of the country’s population since the 1970s. Given structural weaknesses in the economy, they argue that such rapid growth tends to exacerbate problems of unemployment and poverty, and they call for a vigorous resolution of the problem. An independent review of the Philippine population problem would reveal that rapid Philippine population growth is not a post-World War II phenomenon (as some, but not the above authors, suggest). In the last century alone, the population has doubled thrice since 1903. This has implications for claims about the nature of Philippine population growth and assumptions about population control programs.

This book is an excellent source on Philippine political economy. It calls for a redefinition of governmental functions and the establishment of an appropriate business and social environment. Such an environment, according to the authors, shall foster accelerated economic growth as well as equity/welfare improvements in an open economy. But it is clear that more studies are needed with regard to numerous policy questions and that many of these questions – arguably bearing substantially on long-term economic performance – may be outside the traditional domain of economists and political scientists. For example, studies of Philippine organizational management, investment attitudes, and preferences with respect to technology, markets, and people could contribute greatly to understanding the economy’s long-term growth performance and prospects.

Eric Batalla
The reviewer is associate professor of political science at De La Salle University and currently a visiting scholar at Waseda University.