The teak pillars that held up the eaves of the high temple roof outside had begun to bend and bow under its weight. Inside, the main hall of the temple was a dark forest of red lacquered pillars and handmade cotton streamers, twirling below rafters that let in a few shafts of light and air. This temple, said to be the oldest still standing in the region, sat in an impoverished mountain village about an hour’s drive from China’s border with Burma. 1 The crude wooden Buddha statue seated on the dais, partially hidden between the pillars, was painted a cheap and sunny yellow where a wealthier village would have painted him gold. A few bundles of dried flowers on the ground before the statue testified to both the piety and the poverty of the villagers. Shutters hung askew at a square window, and an empty wooden bowl lay on the sill, collecting dust.

This temple was far off the beaten track, and I’d found it through a series of chances. While conducting research into the oral storytelling of Tai Lües 2 in this region of southwest China, Sipsongpanna, I’d come across a fascinating Chinese essay describing the fine drawings in narrative Buddhist murals that depicted local legends (Li 1990). The article especially praised the old murals in temples in the west, near the Burmese border. I developed a thirst to see these and spent a week hopping buses along back roads, using the article as a guide. But though I spent long hours on local buses crammed between villagers and their bags of rice, and a few nights under the musty mosquito nets of old government guesthouses, I couldn’t find a single old mural. A few temples had crude murals, clearly new, probably painted by a monk who had returned from studies in northern Thailand: a series of panels showing princes, ladies, golden spirits, and giant birds, all captioned with the looping Tai Lüe alphabet.

But the old murals, the ones described in the article, were hard to find. In some cases, when I read aloud the name of a temple from the book, local villagers shook their heads—they had never heard of it. Perhaps I mispronounced the name: Chinese and Tai Lüe are very different languages, and written Chinese gave few clues to the local name. Perhaps the old temples were gone, destroyed in World War II or during one of China’s many political campaigns. Or perhaps the article had simply gotten it wrong: quite a few Chinese essays on ethnic minorities, I was learning, were written by scholars who had not studied in the region—or as one Tai Lüe put it, “They sit in the library copying from one book into another, but never come to our Sipsongpanna.”

While looking for the murals, though, I spoke with a lot of monks. Leaning against the railing of his temple porch, one husky, square-faced monk in Meng Zhe mentioned in passing that a nearby village housed the oldest temple in Sipsongpanna, and that it had not been touched since the seventeenth century.

I and a few Tai Lüe and Han Chinese friends who were also curious returned a few weeks later for a look. We hitched a ride on a local truck heading in the right direction, and hopped off in the recommended village in late morning. It was empty—all of the adults and many of the children were no doubt working in the fields at the height of the busy season. The morning sunlight shone on grain spread out in the temple courtyard to dry. As we walked around the temple building, a cluster of barefoot village boys and a few small novice monks in tattered cotton robes came to watch us. They stood with their arms around each other, whispering and staring. “Haw hoa leung,” one boy shouted in Tai Lüe, as the others giggled at the name he had called me: yellow-haired Han Chinese.

The temple was decrepit, and it certainly looked old, but there was no way to estimate its age. Peering at the outer walls, I began to notice places where old murals had been carefully but incompletely scraped off. Old and delicate lines appeared on some areas of the white walls—the contour of a woman’s face, the silhouette of a palace roof, a swirl of black ink. In a few places these were obscured by something painted in broad strokes of red, but this red paint had also been scraped off.

“Why did people scrape off the murals?” I asked the boys.

They pointed to the back of the temple. Here were a few places where the red paint had been left intact, forming old slogans. These read “Long Live Chairman Mao,” and

The boys took us to up the hill at the top of the town to meet the bawchang, the layman in charge of temple affairs and record keeping. The wiry elder man, like many older villagers across China, still wore his blue Mao suit and cap. He sat us down and gave us tea. During China’s Cultural Revolution (1966-1976), he said, Red Guards had descended on the village to knock down old buildings, destroy texts written in the Tai Lüe language, and burn the old, gold-covered image of the Buddha. He had convinced them not to knock the temple down by arguing that villagers used the building to store farm tools and grain. The Red Guards let the temple stand, but scraped off the old Buddhist murals, replacing them with Maoist slogans. After the Cultural Revolution ended, the villagers carved and painted a new wooden Buddha statue and scraped off the desecrating slogans. But they left a few slogans up, he said, so that they wouldn’t forget.

Was it true that the temple had not been altered for three hundred years? we asked. This seemed unlikely. The bawchang went to a trunk in his room, and pulled out the parchment temple records marked in the spidery circles and half-moons of the old Tai Lüe script. Yes, he said, according to this, the last alterations were made in the late 1600s. 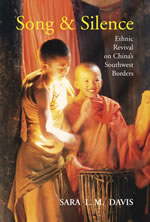 The book I eventually wrote about this research, Song and Silence: Ethnic Revival on China’s Southwest Borders, is set mostly in quiet, subtropical Sipsongpanna (in Chinese, Xishuangbanna), an ethnic region that lies on China’s borders with Burma and Laos. I lived in Jinghong, its capital, in 1997-98, and returned several times in years following, to conduct doctoral research on Tai Lüe changkhap (“skilled chant” or “skilled chanters”). Changkhap is a term used for professionally trained oral poets and the narrative poetry they compose and perform. Eventually it seemed impossible to understand the narrative poems outside of the modernizing, changing context in which they were performed. However, that context wasn’t simple; it was a divided and contentious one. Like the layers of paint and the scrapings on the temple walls, the series of political campaigns and tumultuous economic changes in the region had left their marks.

There seemed to be two separate and distinct Tai Lüe cultures in Sipsongpanna. As part of its expansion into the land on the national borders and its appropriation of material resources there (gold, minerals, teak, and so on), the Chinese state had engaged in explicit projects to create a national culture and to identify, categorize, and shape the identities of the nation’s fifty-six officially recognized minzu (“nationalities”). These officially-constructed nationalities were part of a broader “civilizing project” (Harrell 1995); they marked out the limits of allowable ethnic self-expression in China, and ethnic minorities, like the Tai Lüe, who participate in state displays and self-commodification for tourism, are rewarded with official praise and economic wealth (Evans 2000). As Louisa Schein points out, such official identities are often gendered female, marked as “internal orientals” (Schein 2000); in Sipsongpanna, they have also become the basis of a lucrative sex tourism industry (Hyde 2001). To challenge the official limits by insisting on other kinds of language or religion, as ethnic Tibetans, Uyghurs, and Inner Mongolians sometimes do, is to risk violent conflict with the state.

But in Sipsongpanna, some elements of the unapproved, unofficial ethnic culture were also preserved underground. An ancient text, an old temple, an epic poem in praise of the dead prince: all were saved because someone took a risk; hid them in the rafters of a stilt house; persuaded the Red Guards to pass over; sang them to a listening student at night. Much was also saved because Sipsongpanna is laced with a web of forest paths that connect it to related peoples in nearby Southeast Asia. When war or political campaigns roiled one Tai region, residents could smuggle children, texts, and songs across the borders to be kept by cousins for a few years.

As I followed my search for oral storytellers in Sipsongpanna, I found a growing ethnic revival movement emerging piecemeal below the radar of the state. During the past ten years, young Tai Lüe monks and activists have created a grassroots movement that spans national borders, drawing on contacts and exchange with related parts of Thailand, Burma, and Laos. They have revived indigenous Tai Lüe Buddhism, building hundreds of temples and initiating thousands of Buddhist novices in the wake of the near-elimination of Tai Buddhism during the Cultural Revolution (Hasegawa 2000). These temples have also become seminaries, training a new generation of Tai Lües in the banned old Tai script (Hansen 1999). Tais have used new technology, such as Macintosh computers bought in Thailand, and pop and rock music learned from Tais in Burma, to interest youth in their own language and culture. And young people are also learning how to perform old oral narratives. They do much of this behind the scenes, hidden from the direct gaze of the state and the competing shows put on for tourists. They also have ongoing and sometimes heated debates about how best to move forward, and they discuss which cultural style, artifact, song, language, or temple truly represents “real Tai culture.”

Thus while many Tai Lües participate agreeably in the public showcasing of their ethnic identity staged by the Chinese state (Keyes 1995)—to such a degree that they are sometimes portrayed as a “model minority” in Chinese official media—they live in a different world by night. Tai Lües have avoided open conflict and managed a boundary between the public and private spheres.

A book published in the United States about any part of that private culture risks testing those limits. The question that haunted some people in Sipsongpanna now faces me: if they tell me, and I publish the name of the village that holds the oldest temple in the region, what will happen to it? Will it be knocked down, rebuilt, and marketed as a tourist attraction, or allowed to continue quietly rotting? Will a book that makes hidden things visible make life better or worse for those who risked everything to keep a temple, a book, or a song? The book includes many of their songs, but under the circumstances, it is not surprising that some Tai Lües chose silence.

Kyoto Review of Southeast Asia. Issue 7. States, People, and Borders in Southeast Asia. September 2006
Although all the web urls were working at the time of original publication in March 2006, they have
not been updated or checked since that time.