The book is a welcome contribution to the study and appreciation of terrorism in the Philippines and its implications to Southeast Asia’s regional security.  Focusing on the case of Marawi City, the capital city of the province of Lanao del Sur of the Bangsamoro Autonomous Region in Muslim Mindanao (BARMM), island of Mindanao, Philippines, inhabited by one of the highest percentage of Muslims among the 28 provinces of Mindanao, the research examines the persistent threat of extremism and terrorism instigated by non-state actors confronting regional peace, security, and stability.

Divided into five (5) chapters written by three (3) scholars on security and terrorism, namely: Kumar Ramakrishna (chapter 1, “’The East Asia Wilayah’ of ISIS and the Marawi City Siege: A Long Time in the Making); Rommel Banlaoi (chapter 2, “The Abu Sayyaf Group’s Persistence and the Marawi Siege: A Chronological Analysis of the Crime-Terror Nexus in the Philippines and the ISIS Connection in Southeast Asia,” and chapter 5,  “ISIS Threats After Marawi Liberation: Continuing Terrorist Threats and Emerging Security Challenges of Violent Extremism in the Philippines”); and Amparo Pamela Fabe (chapter 3, “Financing Terrorism: Following the Money Trail in the Marawi City Siege,” and chapter 4, “Dreams, Hopes, and the Future: Trauma Counselling and Human Capacity Building Among the Maranaw Muslim Women and Children of the Marawi City Siege.”),  the book encapsulates the significant historical milestones that shaped and transformed the economic, social, and cultural isolation and marginalization of Filipino Muslims to a political engagement that challenged the defence, tranquillity, and strength of the Philippine state. 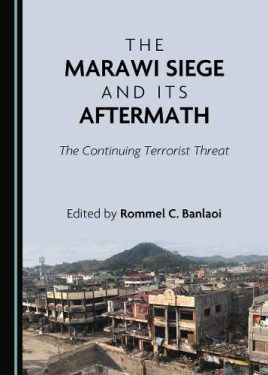 Ramakrisha’s chapter is an historical account leading to the formation of the wilayah (province) of the Islamic State of Iraq and Syria and the Levant (ISIL, also known as ISIS) in Southeast and East Asia with its principal sphere at Marawi City. Although the attempt to establish ISIL’s wilayah was frustrated following the defeat of Muslim militants affiliated with the Abu Sayyaf Group (ASG) and other ISIS-inspired foreign terrorists (mostly Indonesians and Malaysians) after a five-month long armed conflict known as the “Siege of Marawi” or “Battle of Marawi City” (23 May to 17 October 2017) between the Philippine government security forces, Ramakrishna argues that Islamist radicalization will persist as the combined factors of socio-economic and political marginalization of the Moros (Filipino Muslims) and “spread of intolerant Wahhabi ideas” (p. 44) are crucial and serve as the fountainhead of Muslim radicalism not only in the Philippines but also in East Asia.

Chapter 2 of the book traces the birth, evolution, and mutation of the Philippines’ foremost Muslim terrorist organization, the Abu Sayyaf Group (ASG). It analyses how it combines terrorism and crime/banditry and narrates the implications of shifting allegiances to al-Qaeda and ISIS to sustain itself and adapt to national and international challenges in advancing its Islamist ideology. Likewise, Banlaoi charts not only the linkages between ASG and other home-grown terrorist groups but also the network it develops with Jemaah Islamiyah (JI) and other regional extremist organizations which have similar objectives with JI and ASG task to carve a “Daulah Islamiya or Islamic caliphate in Southeast Asia” (p.58).

Fabe’s chapters 3 and 4 are, namely: an exposition of the modes of financing utilized by the ASG and the network of ISIS/al-Qaeda during the Marawi siege; and psychosocial response to the internally displaced persons (IDPs) especially the Maranaos (ethnic group of Marawi) women and children respectively. Finally, Banlaoi argues in the book’s concluding chapter that terrorism in Mindanao is far from resolved despite the military victory of Philippine security forces against a number of terrorist and jihadist groups. He suggests that the government should have an effective implementation of its anti-terrorism programs, raise public awareness on the threats of terrorism, and use of community-based approaches to address the causes of terrorism (p. 125).

While the study is a significant addition to the body of literature on terrorism in the Philippines and Southeast Asia, the book needs to enhance and deepen its investigation on chapters written by Amparo Fabe on financing terrorism (ch 3) and trauma counselling (ch 4). Chapter 3 discusses the methodologies and forms of financing terrorist activities in the Philippines and concludes that the success of terrorist groups in funding their endevours was due to the absence of a “strong counterterrorism finance strategy” (p. 86). However, there is no clear analysis in the chapter that evaluates the 2001 Anti-Money Laundering Act (AMLA) which is the country’s foremost law intended to counteract terrorist financing. It is unfortunate that Fabe was unable to probe the relevance and implementation of the said law in addressing the issue of financing terrorism before making the aforesaid conclusion.

Similarly, Fabe’s chapter 4 is more of a psychosocial project design – identifying its conceptual framework, objectives, activities, training with its “preliminary findings” (pp. 92-101) — a work-in-progress rather than a complete study on the outcomes of psychosocial approaches in resolving emotional, social, mental, and spiritual issues among women and children affected by conflict in Marawi. Whist psychosocial responses in the 2005 and 2011 London and Norway respectively are cited in the chapter, there has been no exposition how these cases relate or are linked to the Marawi siege.

Limited to five (5) key informants – two (2) ASG members, two (2) Filipino scholars, and one (1) Maranao community leader in Manila — Ramakrishna’s chapter has been inadequate in providing any new information and more profound analysis of Islamic extremism in the region as it relates to terrorism in Mindanao. His heavy reliance on secondary information and seemingly intelligence reports from the Philippine military have generally restricted the study within the literature of Moro insurgency movement rather than a broader and thorough perspective of terrorism based on the worldview of direct and primary regional actors and informants. Moreover, Ramakrishna’s account does not appear to be much different from Banlaoi’s chapter 2 on the latter’s narrative on the history of ASG and ISIS in the Philippines and the region.

In spite of some weaknesses of certain chapters of the book, the study as a whole is a timely piece of scholarly composition which academics and policy makers engaged and involved in the study of terrorism and counterterrorism would hugely benefit from.