This is an ambitious book that seeks to tell the social history of gambling in Singapore from colony to global city. Beginning from an era of violence in 19th century Singapore, Lee Kah-Wee vividly describes the establishment of gambling houses within the immigrant Chinese community. Organised according to dialect group and clans with the Teochew gambling houses converged on Hong Kong Street, Kreta Ayer and Sago Street, while their Hokkien counterparts sprung up along Hokkien Street, Smith Street, Beach Road and Orchard Road, these gambling houses were spaces of vice and ambiguity. Lee argues that there were “internal ambiguities as to what constituted a crime” as well as what constituted a “gambling house”. These ambiguities made police work onerous and prosecution ineffective. This led to the revision of the Common Gaming Houses Ordinance in 1888 which expanded its powers by being more inclusive in its definition of “public” but not necessarily more precise.

The 1950s to the 1970s are what Lee describes as a period of “moral passage” in which the law played an instrumental and symbolic function in changing Singaporeans’ behaviour towards gambling. While the ambiguous definition of public space in the 19th century allowed for selective criminalisation and prosecution, the period of “moral passage” lowered the threshold for gambling transgressions through the tightening of laws and regulations. At stake was not merely the increase in vice and crime, but, as Lee asserts, the moral legitimacy of the new post-colonial government and, later, the nation-building project. 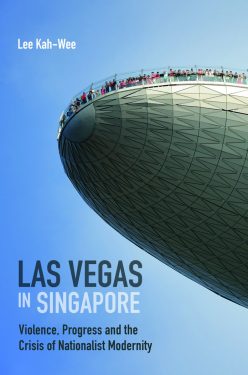 Lee goes on to argue that the nation-building project soon began to erase the cultural meaning and social role of gambling among Chinese communities by placing universal morality and public order as paramount. Under such circumstances, “those who gambled were ignorant, vulnerable or dangerous” because from “the perspective of the state, gambling undermined the conditioning of the rugged and disciplined Singapore subject and represented a vast hidden economy outside its reach”.

Nevertheless, the ever-pragmatic Singapore state understood the futility of any attempt to eradicate gambling from the Chinese community. There were even plans to embrace this reality with Lee Kuan Yew’s 1965 proposal to establish an off-shore casino in Pulau Sejahat; a proposal which never materialised. Before long, gambling was corporatized with the setting up of the Singapore Pools in 1968 with the help of Bulgarian advisors.  The Singapore Pools not only sated the local desire for gambling but also served as a key benefactor of national institutions like the National Stadium and other sporting activities, and thus encapsulated the “relationship between morality and economics within the context of nation-building”.

This relationship was a problematic one because it was clear, on the one hand, that national sporting institutions would not be possible without gambling money. This required “moral laundering” in which the immorality of gambling is laundered and made clean through the building of wholesome institutions. On the other, the Singapore state had also desired to shape and safeguard the morality of Singaporeans such that it stopped the telecast of lottery draws in 1978 in order to discourage public spending.

The book reaches its zenith in Chapter 7 where the decision to build the so-called “Integrated Resorts” is discussed. The two casinos that eventually materialised in downtown Marina Bay and the island of Sentosa were not out of the blue but the latest in a line of proposals for casinos in 1965, 1967, 1986, and finally in 2002. According to Lee, “In each instance, it was introduced as a way to boost tourism receipts. The government had constantly turned down the proposal on moral grounds”.

Focusing on the Marina Bay Sands Integrated Resort, the chapter documents the process and politics of bringing the expertise of rowdy Las Vegas into orderly Singapore. Upon deciding on Sheldon Adelson’s Las Vegas Sands as the most suitable developer, it became an exercise of dovetailing, or perhaps shoehorning, a global franchise with local sensitivities. For example, one of the Singapore government’s many stipulations was for the casino to be as inconspicuous as possible by blending into the rest of the resort. This was unlike the typical Las Vegas experience where casinos were the first thing one notices upon entering the hotel. This was in keeping with the attitude that the Singapore government had towards gambling throughout its post-independent history – confine, contain, and harness – so much so that  Lee makes the point that “What is missed is that the appearance of the Integrated Resort is simultaneously the disappearance of the casino”.  It is this form of statecraft so apt at bringing order to vice, predictability to chance, and structure to chaos that characterises Singapore’s brand of nationalist modernity.

It is a nationalist modernity that may have, Lee argues, seeped beyond Singapore’s shores. The success of the Integrated Resorts goes beyond tourists’ receipts and hotel room bookings. It can be measured in the way it has paved the way for casino expansion in Asia. “By lending its clean reputation to the industry, Singapore has inadvertently given the industry and its lobbies a trophy to promote the Integrated Resort concept to cities and communities that had historically been wary of large scale commercialised gambling”.

Las Vegas in Singapore is a solid piece of scholarship that fills a gap in the literature. It is by no means perfect. Minor quibbles include the tendency to delve into the rabbit hole of descriptions and concepts that do not propel the argument forward. For example the mention of Analytical Hierarchy Process was necessary but did not warrant such a lengthy discussion. Related to this is the occasional inability to adequately communicate to the reader why detailed information on, say, Slot Data Systems or International Gaming Technology, was important to the overall narrative. Perhaps most pertinently, why did the Singapore government decide to give in to building casinos in 2002 when it had resisted for so long?

Nevertheless, I recommend this book to anyone who is interested in the relationship between the Singapore state and gambling. I recommend it because it is so much more than a book on the state and gambling. It is a profound and sincere attempt to understand the ideological and moral contradictions that are embedded in the nation-building project, and how Singapore is striving to carve out a niche in the global marketplace on its own terms.

Reviewed by Terence Chong, Senior Fellow at the ISEAS-Yusof Ishak Institute. The views expressed here do not represent those of the Institute.