Professor Michael Leifer, the late much respected scholar of Southeast Asian studies, wrote a preface for the critically acclaimed book by Roger Kershaw titled, Monarchy in Southeast Asia. Leifer said, “It is a conventional wisdom that monarchy has become an anomaly. In the case of Southeast Asia, this axiom is valid only up to a point. Despite the institutional upheavals, caused by colonialism and its dismantling, the region contains one ruling monarchy (Brunei), and three varieties of constitutional monarchy (Cambodia, Malaysia and Thailand) of some political import.” 1 Kershaw himself raised an interesting question in response to Leifer’s statement. He asked, “Whether the anomaly of monarchies surviving is due to the persistent and natural workings of traditional political values, or whether their existence, besides being partly fortuitous, is now manipulated by elites (even by monarchs themselves), in order to pre-empt the destructive or destabilising effects of modernisation— the very modernisation which seems to make the survival of the monarchy rather unpredictable.” 2

This short article originates from the above context. But instead of treating the subject as an anomaly as seen in previous studies, it will provide some pointers to the survival of monarchies in Southeast Asia under the new political climate.

Kershaw is correct when he described the issue of modernisation as a threat to monarchies. Indeed, it is not just modernisation that has sought to contest the political relevance of the monarchies, democratisation has posed a threat to their existence too. In the past decade, the wave of democratisation has continued to sweep over Southeast Asia. Long years of authoritarianism in Indonesia finally came to an end as the country marched into a new era of democratisation. Having been isolated from the world since 1962, Burma, the former name of Myanmar, is now welcoming political reforms. Elsewhere in the world, particularly in the Middle East, democracy has become a much needed value. Amidst this trend, monarchies in Southeast Asia have been put under closer scrutiny. More people in countries where monarchy remained began to ask a crucial question: is monarchy compatible with democracy?

In 2008, Nepal abolished its absolute monarchy and declared the establishment of the Federal Democratic Republic of Napal. The demise of the 239-year old Shah Dynasty in Nepal indicated that the monarchical institution was highly vulnerable as it appeared antagonistic toward democracy. There was a fundamental difference between various political actors, including those within the royal family, over the proper role of the monarch in contemporary Nepal. While the Nepalese monarchs had insisted on playing an active role in politics and reassigning themselves as the core of the “nation”, politicians only saw the function of the monarchy as indicated by the constitution. In order words, Kings should reign but not rule. 3 The monarchs’ political intervention partly led to the collapse of the Nepalese absolute monarchy.

In Southeast Asia, some monarchies have successfully entrenched their rule against the tide of democracy. Some are potentially becoming the target of annihilation. At present, four out of ten Southeast Asian nations preserve various kinds of monarchy, ranging from absolute, constitutional and ceremonial. In this special issue, the future prospect of the monarchy in Thailand, Cambodia, Malaysia and Brunei will be discussed. 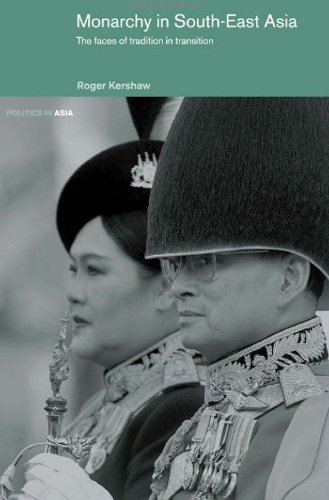 “It is a conventional wisdom that monarchy has become an anomaly. In the case of Southeast Asia, this axiom is valid only up to a point.” (Roger Kershaw)

King Bhumibol Adulyadej remains the world’s longest reigning monarch and the epicentre of the Thai political entity. His coronation took place in 1946, following the mysterious assassination of his brother King Ananda Mahidol. Sultan Hassanal Bolkiah of Brunei has proven his endurance while upholding the legitimacy of his absolute reign in the era of democratic nation-states. Cambodia’s King Sihamoni, whose role is largely ceremonial, plays a vital part in the construction of a Khmer national identity. But the position of the monarchy has been thrown into uncertainty in the wake of the death of the popular former king, Norodom Sihanouk, in October 2012. Malaysia has a system of elective monarchy. The Yang di-Pertuan Agong is the highest ranking office created by the constitution of the federation of Malaysia. The 14th and current Yang di-Pertuan Agong is Sultan Abdul Halim, the Sultan of Kedah. His reign began on 13 December 2011 after his election by the Conference of Rulers.

In the West, monarchies have been perceived as a political anachronism in the face of the prevailing democratic institutions of government. The British monarchy has survived because of its constant reinvention to keep up with political developments at home. Dennis Kavanagh said, “The key to the monarchy’s survival in Britain had been its willingness over the last three centuries to concede power in good time to head off demands for its abolition.” 4 In Southeast Asia, the vestiges of the bygone era ruled by kings and sultans have been able to survive the democratic era. But for how long?

The prolonged political crisis in Thailand in which opposite factions have competed fiercely for ultimately the strengthening of their power position has further dragged the much-revered King deep into the political abyss. But to be fair, Bhumibol has always been an active King. 5 And since the military coup of 2006, certain members of the Thai royal family no longer play politics behind the scene, they are now moving themselves into the footlights. For example, Queen Sirikit’s attendance of a funeral of a yellow-shirt member of the royalist People’s Alliance for Democracy was surely perceived as the monarchy’s meddling in politics. Her appearance at the funeral infuriated the red shirts.

The Sultan of Brunei has so far demonstrated his ability to adjust the domestic political system to meet new challenges. He solidifies his legitimacy using the ideology of Melayu Islam Beraja (MIB) which allows for the significant role of Islam at the state level. But this process is exclusive and is at risk of being rejected by its non-Muslim population.

Meanwhile, other royals have been sullied by scandals and misbehaviour. These have tainted the image of the royals and therefore have emerged as a threat to their survival. For instance, Tengku Temenggong Mohammad Fakhry, the prince of Malaysia’s Kelantan state, was accused of treating his 17 year-old ex-model wife as a sex slave. This was not the first controversy surrounding the many members of Malaysia’s royal families. Hazliza Ishak, a 26-year-old former model, was the second wife of Raja Jaafar Raja Muda Musa, the second- in-line to the throne of Malaysia’s Perak state. She was found dead in 2002 close to Ipoh. Her death ignited a full-blown royal scandal that gripped the nation for months.

Indian scholar Sreeram Chaulia argues that the future of monarchies in Asia depends on the combination of their personal and political capabilities and how they transpire as a non-threatening factor to democracy. 6 In the Southeast Asian context, the survival of the monarchies, likewise, relies much upon their ability to reinvent themselves at three levels: personal, national and international.

At a personal level, the monarchs, more than ever, need to exhibit their increased accountability, transparency and responsibility, if they want to live side-by-side with a democratic regime. On mainland Southeast Asia, the concept of divine kingship has remained highly sacred. The Thai and Cambodian kings are supposed to perform as Buddhist Dhammarajas, or virtual kings, so as to augment their charisma, and subsequently reverence, from their subordinates. Much in the same vein, the Sultans must show that they exercise their royal authority based on Islam. The religious sanctity of the throne is indispensable for the existence of the monarchies. It demonstrates the close intertwining between kingship and religion, and if used wisely, it can enhance further the level of divinity of the monarchs. The abolition of the Nepalese absolute monarchy under the reign of King Gyanendra Bikram Dev partly derived from the lack of his religious charisma. Chaulia said:

Divine origin myths have always been the bedrocks of monarchical power, but they also imply a certain expectation from the masses that the holy king should rule in an upright and spotlessly clean fashion. Charisma is not automatic, even in a hereditary religious line of succession, but earned through acts that remind people of the religious sanctity of the throne. Nepal’s Gyanendra forgot this crucial aspect and squandered all remnants of respect and adoration that his predecessors earned. From personal licentiousness to alleged criminality, the scandals and negative publicity about the royal family that Gyanendra failed to contain dug his grave in the popular eye. 7

At a national level, the monarchy’s staying power is intricately related to its alliance with the military. As history has shown, the military has been an obligatory defender of the royal institution. Past and present kings have sought to forge intimate alliances with armies, as can be seen by the prefix “Royal” for the national army in some countries. Thai armed forces become the Royal Armed Forces, symbolising the King as the commander-in-chief. In the Thai case, it is clear that King Bhumibol has overwhelmingly enjoyed the firm support from the military. General Prem Tinsulanonda, the President of the Privy Council and former prime minister (1980-88)—the position appointed by the King himself, once said, “The military is a horse that serves the King, not politicians.”8 In fact, the military possesses a powerful mandate that often determines the lifespan of all kinds of regimes, be they monarchical, despotic or democratic. Central to the longevity of the monarchies is the loyalty of the military. But the intimate ties between the monarch and the military can never guarantee the stability of the throne, particularly if such ties threaten democracy. Again, the current Thai crisis has demonstrated that the monarchy-military alliance is now slowly losing its grip of power. The red-shirt movement is determined to fight against the military domination of politics. And the involvement of the monarchy in politics has led to a birth of the so-called anti-monarchy element in Thailand.

Lastly, at the international level, the monarchies may need to ensure that their existence is in the interests of powerful foreign allies, and that they remain an essential political institution. The foreign powers’ support could be expedient in time of crisis, especially in warding off political opposition. The United States was known to be a guarantee of safety of the Thai monarch during the spread of the communist threat in the region.

All these guides to longevity of monarchies in Southeast Asia do not automatically offer a rosy picture for their future. New factors emerge from time to time to challenge the integrity and legitimacy of their rule. Using illegitimate weapons to fight against such challenges may prove counterproductive. The application of the lèse-majesté law against the anti-monarchy element is causing grave concern over the human rights situation in Thailand. Harsher measures do not necessarily display the monarchs’ ultimate power, but rather their desperation to cling on to it.

The monarchical system has been around for thousands of years. It has become less forceful, and in some cases has ceased to exist, as nations of the world have accepted democracy as the final form of government, of course at various degrees and in different fashions. The ultimate key to the survival of the monarchical institution, therefore, rests on the way in which it acts and reacts in a complementary manner to the rising desire of the people for democracy.