Myanma no Kuni to Tami: Nichimen Hikaku Sonraku Syakairon no Kokoromi  (『ミャンマーの国と民―日緬比較村落社会論の試み―』)
(State and People in Myanmar: A Comparative Study of Rural Societies in Japan and Myanmar)
By Akio Takahashi. Tokyo: Akashi Shoten, 2012

This book focuses on rural society in Myanmar. While the new government of Myanmar has attracted public attention because of its efforts to adopt liberal democratic policies and institutions, the rural areas where three-fourths of the total population dwell, have remained a black box that is rarely reported on by the media. Akio Takahashi, the author of this insightful book, is the world’s leading expert on Myanmar (Burma) studies, having conducted field surveys in more than 200 villages for 30 years. He has frequently visited and stayed in numerous villages and talked to several thousand people without any assistance, as he speaks the local language fluently. People outside (and even inside) of Myanmar tend to adopt a gloomy, ordinary view of the rural areas, where human rights are ignored, market economy is distorted, and extreme poverty is rampant. However, this book presents a hidden, essential view of Myanmar’s rural society based on the author’s deep understanding of the subject and profound interdisciplinary knowledge.

The aim of the book

The final aim of this book is to show the structure of the Myanmar village as compared with the Japanese village where the author grew up, and to frame inductively a theory of rural society in Myanmar. To achieve this, the author discusses two important points: how and to what extent common values and a sense of community develop among the villagers, and how the relationship between the community and the individual is formed.

Regarding the first point, the author indicates that the Myanmar village has never functioned as a unit of farmland management, irrigation water management, or tax payment. In contrast, the Japanese village was established to function as a unit of those systems. The author suggests that this difference could explain one reason why a tight community is formed in the Japanese village but not in the Myanmar village. 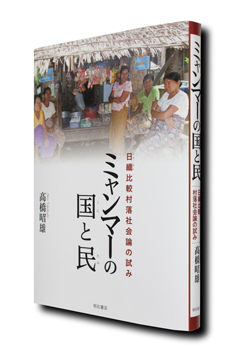 Furthermore, the author thoroughly explains that the economic disparity within the Myanmar village leads to some distinct features. Because many people are landless and work for a subsistence wage, it is difficult for rich farmers and poor landless laborers to reach a common understanding. For instance, the Kau Sai Si, which is often observed in the Myanmar village, is a women’s group whereby a leader gathers the members from inside and outside of a village, sends them to a landowner who needs labor for planting rice, and receives a fee from the landowner and redistributes it to the members in exchange for their labor. In contrast, the Yui of the Japanese village is a free labor exchange among farm households within a village. Given the disparity in land holding and the difficulty in achieving mutual understanding between landholders and laborers, it would seem reasonable for a villager to charge a fee for one’s labor in the Myanmar village. Moreover, because of the economic disparity and the difficulty in achieving mutual understanding, how to manage a village common in the Myanmar village is also different from that in the Japanese village. Though a common is jointly managed and used in the Japanese village, the Ywa Myay, which means a village common in the Myanmar village, is mostly managed and used by an individual and most villagers are the mere recipients of a part of the income that is generated from a common. In addition, because of the economic disparity in the Myanmar village, labor force mobility is so high that the landless poor can almost always find opportunities to earn an income

In analyzing the relationship between the community and the individual, the author generalizes that relationships between two individuals in the Myanmar village accumulate because the villagers come in contact with each other quite often. Then, the accumulated individual-individual relationships (dyadic relationships) develop into a group with a specific purpose through a variety of catalysts. For instance, if there is a funeral or a wedding ceremony (all of which are catalysts) in a village, a social service union may be formed. If a village receives a donation of a fire engine, a fire-fighting committee may be formed. If a pagoda is constructed in a village, a pagoda management committee may be formed. Under the direction of public organizations or nongovernmental organizations (NGOs), village organizations may be formed for forest management, financial activities, and so on.

To conclude, the author inductively presents the characteristics of rural Myanmar society. First, a community member in the Myanmar village can easily “leave” his/her community or group because a group is based merely on the relationship between two individuals. One reason why individual-individual relationships (dyadic relationships) accumulate in the Myanmar village is that it is difficult in such a highly stratified society to reach a common understanding among villagers. Second, the Myanmar village can be regarded as a consumption-oriented community rather than one based on production because it has not functioned as a unit of production activities. In addition, a community member can easily “leave” his/her community or group because it is formed for consumption as opposed to production. Finally, a village community in Myanmar can be regarded as an intermediate group that is open to the outside, while a village community in Japan was typically quite closed to the outside. On this subject, the author refers to his Japanese village at the end of the book.

This book includes interesting stories and instructive perspectives, making it widely useful for those who live in the rural areas of Myanmar and Japan. Moreover, the author of the book demonstrates a deep understanding of the subject through the rich information he provides and his wide-ranging interdisciplinary knowledge. This book is a must-read for scholars in various fields of study, including agriculture, anthropology, sociology, politics, economics, and development and area studies.