This biography of a most distinguished Filipino journalist, political commentator, amateur philatelist, and human rights activist is based on the diary Armando Malay kept assiduously for over fifty years.

The diary begins in the 1930s, when Malay began recording impressions of his surroundings: from the vibrant academic and political life at the University of the Philippines (UP), where students were involved in “national debates” over the future shape of Philippine independence, to the rough-and-tumble world of Manila politics, where Malay describes the complex characters involved in the evolving patronage machine of the colonial capital.

The diary then moves to the war period. Here Malay describes how professionals like himself were forced to collaborate with the Japanese in order to feed their families. The stigma of collaboration did not stick to him, however. Not only was his role relatively minor (he was not a politician), but his pre-war media friendships also protected him from retribution. But this came at a cost: the columnist who described himself as “a frustrated Cassandra, a fellow who was to be feared by persons convicted of or responsible for the ‘negative’ aspects,” now had to temper his “destructiveness.” 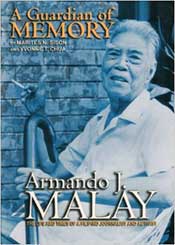 He would stay with the press for almost ten more years before becoming a full-time UP faculty member in 1966, teaching future journalists at the School of Mass Communications. A few years later, Malay was appointed dean of student affairs, a position that would expose him to two of the most significant upheavals in post-war Philippines: the student rebellion and revitalization of Filipino communism in the late 1960s and early 1970s; and the declaration of martial law which led to a 15-year dictatorship by then-President Ferdinand Marcos.

These upheavals broadened Malay’s political perspective. He was one of those arrested when martial law was declared. After his release, he returned to his old post as dean of students and was immediately caught up in a delicate balancing act between the students who sought to generate opposition to the dictatorship in the academe, and the military, which wanted to stamp out all “subversive acts,” especially in the schools.

The self-confessed “independent, liberal, maybe even a bit of a radical” observer of politics eventually became a reluctant activist, compelled by the necessity of defending the human rights of his detained (and badly tortured) son-in-law and by the fear that his daughter, who remained underground, would suffer the same fate.

After his retirement in 1978, Malay headed several organizations defending the rights of political detainees and revived his old pre-war column (“A Grain of Salt”) in a small anti-Marcos newspaper, We Forum. The paper exposed Marcos’ World War II medals as fake, which led to the arrest of the staff in 1982, Malay included. By this time, such arrests were not an indication of the strength of the regime, but signs of its weakness. A year later, opposition leader Benigno Aquino, Jr., was assassinated, setting off a torrent of protests culminating in the 1985 “People Power Revolution” that ousted Marcos, replacing the dictatorship with an unstable constitutional order under Corazon Aquino.

The “return of democracy” was a happy occasion for the Malay family: a son in exile in China returned home, and his daughter and son-in-law surfaced from the communist underground to participate in peace negotiations with the government. But the reunion was short-lived. The new regime, fearful of the politicized military that helped put it in power, continued the counterinsurgency war. His daughter and son-in-law went back underground. Two years later, in July 1989, they were arrested, but at least allowed to post bail.

In 1990, failing eyes forced Malay to stop writing. His activism, however, continued until the death of his wife Paula Carolina in late 1993. Malay then retired completely from politics.

Sison and Chua blend Malay’s personal story with that of national politics so that readers understand how much his life and that of the nation (at least the imperial capital) have been intertwined. They have thus done Malay a double service – not only are they among the first to read his diary through and through, but they have embossed his name on the pages of the national narrative.

The book also encourages us to think about the diary as a doubly-revealing form of history. Malay’s diary records his own daily questionings and puzzlements, his impressions and opinions, and the sentiments and emotions evoked by the events, people, associations, and institutions he encountered throughout his lifetime. The portrait is of someone who is arrogantly candid about his strengths and limitations, his likes and dislikes. The arrogance and confidence are traits to be expected from one born into a reading family, with an education at a top public high school and the University of the Philippines. But we also read an amazing candor about his weaknesses: his inability to communicate with his children, his admission to being a reluctant activist, even a belated confession of having gotten the clap on a journalists’ night out.

How many of us who strut our arrogance are willing to openly admit our frailties?

Alas, very few write diaries nowadays, and among those who do, will any have the same discipline as Malay, to record daily activities for most of one’s adult life? This is the last, but perhaps the most important thing about Sison’s and Chua’s book. These authors have given us insight into a practice that may now be archaic. For the diary has been replaced by the digital camera, while the tedious but meaningful spilling of ink onto paper has been displaced by the speedy but easily altered hacking on the computer keyboard.

[The Armando Malay papers, including his 51-volume diary and a near-century of pictures, writings, and newspaper clippings, can be found in the Archives Section of the University of the Philippines Library.]