By the time long-time foreign correspondent Dominic Faulder completed his biography of Anand Panyarachun, he had spent six years and interviewed his subject over 60 times. This would seem more impressive than it is, had Anand not been born just weeks after Siam’s 1932 revolution, and not been a witness, participant, or principal in nearly every major event to affect Thailand during the 20th century’s latter half. To this day, he still easily fills a room with the “great and the good”, and offers views that register as present-day briefings as much as lessons from the past.

Each of us has “our time”, which we share with contemporaries of a similar professional and personal milieu. Anand’s time began in 1958, at 26, upon becoming chef de cabinet to Thailand’s longest-serving foreign minister, and can be said to have ended in 2004 as chair of the UN Secretary-General’s High-Level Panel on Threats, Challenges and Change. His contemporaries include U Thant, Dean Rusk, Zhou Enlai, Henry Kissinger, Lee Kuan Yew, George H. W. Bush, Suharto, and Kofi Annan—to say nothing of countless Thais in both the public and private spheres who have shaped their nation’s domestic and foreign affairs.

Fitting then—or perforce—that Faulder has attached “the Making of Modern Thailand” to the book’s title. Indeed, one of the work’s chief assets is its being equally biography and history, with each genre supporting the other. Anand is the proverbial lens through which the reader views Thailand’s development, which reciprocates by illustrating how “history maketh the man”. The result is a comprehensive and coherent narrative. Also stemming from the length and richness of Anand’s life, the book is a mine of new insights and information for old Thai hands, while also serving as an appropriate introduction for newcomers.

The portrait of Anand that emerges from the pages is of a complex individual of both undeniable principles and contradictions. This is apparent early on in his life and partly explains his meteoric rise in the Foreign Ministry. Despite being born into a well-to-do family whose connections extended to royal circles—that is, the very preserve given to defining and claiming “Thai values”—Anand has always exhibited characteristics more often seen as Western: critical thinking, initiative, individuality, directness. Such were what Thailand required in dealing with and within foreign nations. This complexity also informs Anand’s persecution at the ministry in 1976, when his principled insistence on civilian-led policy proved too much for a self-serving military. In both cases, he acquitted himself admirably, as does Faulder in conveying the gratuitousness of the army’s aggression and the toll it took on the diplomat and his family.

Nor were Anand’s tenures at the Saha Union conglomerate and Government House portrayals of consistency. In contrast to his years in New York and Washington, when he had not only represented Thailand as an ally in America’s war in Vietnam, but utilized such status to challenge the US, at Saha Union Anand seldom strayed from the “company line”. While honest business practices were rightly non-negotiable, neither were the rights of independent unions and those of workers to join them: Saha Union pressured and punished the labour movement. Conversely, despite confiding in Faulder that he had “never been to the Northeast … never knew how the other half lived”, as prime minister Anand championed decentralization and minority rights. He also attacked the HIV/AIDS epidemic in Thailand, initially seen as exclusive to perverts, prostitutes, and the poor, with unmitigated zeal. Faulder’s is a moving account (“countless lives saved, and incalculable grief avoided”) of steely leadership prevailing over vested interests and bureaucratic indolence. 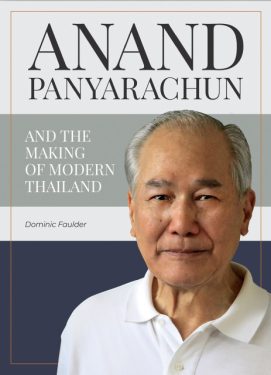 The most compromised aspect of Anand’s legacy concerns his refusal to hold the military legally accountable for the “Black May” violence and violations of 1992. His express intention, to identify officers with “political responsibility” and “remove those people from command positions”, was duly accomplished. Yet his justification for not pursuing a criminal investigation, that “it would have been out of my hands and up to the court, and have carried over to the next government”, simply bears no logic. That such an investigation could not have been completed during his brief premiership was no reason not to begin the process. Faulder’s further explanation, that the “mandate to see justice done lay with an elected government”, reflects Anand’s political judgment only, not a legal or constitutional precept. This judgment was not only faint-hearted and partly to blame for the army’s subsequent presumption of impunity, but was not in keeping with principles Anand otherwise espoused.

Overall, what the book cannot help but display is Anand’s combination of uncommon talent and long hours, infused with a deep sense of duty toward his king, country, and fellow citizens. This is as evident in the quarter-century since his second premiership ended as during the preceding 60 years. Rather than simply work the cocktail circuit or cash in on his name and network, Anand has taken on a plethora of responsibilities, many of them low-profile or foreseeably demanding.

Most notably, he chaired the drafting committee for Thailand’s 1997 Constitution, whose process and result represented the closest the country has ever come to democratic governance. Its letter was scrapped after the 2006 coup d’etat, its spirit and substance by Thailand’s current junta. Anand then chaired National Reconciliation (2005-2006) and Reform (2010-2011) Commissions, regarding Thailand’s southern insurgency and political crisis, respectively. Formed by prime ministers to divert attention away from unlawful action, the commissions were promptly ignored. Yet to his credit, Anand applied his stature fully and with conviction, casting the expediency of Thai “leadership” in even starker light.

If Faulder’s competence as a researcher and interviewer (including of some 100 other figures) is evident in his profile of Anand, his skill as a writer comes across in the larger story. Indeed, the book raises the standard of a “journalistic account”—often euphemistic for hastily and poorly written—with prose that seldom soars but never falters. The explanation of the 1962 case at the ICJ, pitting Cambodia against Siam, is refreshingly clear and informative, especially in view of Thai attempts in recent years to muddy the record. The book hits full stride in Chapters Five-Seven, covering Thailand’s democratic interlude in the mid-1970s and sea-change in relations with the US and China. Over 76 lucid pages covering old territory and new, the reader is made to understand how events of seminal importance were occurring both in succession and simultaneously. Anand, at the very pivot point between the US and China, offers a vantage point as exclusive as anywhere in the book. Bewildering, however, that US-Thailand rift was not assigned its own chapter title; a minor own-goal.

Faulder is at his best in Chapters Nine and Fourteen, recounting in detail the “only in Thailand” manner in which Anand twice assumed the premiership. If coups d’etat are not unique to Thailand, surely are those characterized by such ineptitude and courtesy. And while machinations behind closed doors are likewise the stuff of unelected leadership everywhere, seldom do they occur in royal palaces whose doors are left ever so slightly ajar. Referring to the coup leader and his high-level hostages aboard a grounded C-130: “For a moment, it seemed he might let them all go as if nothing had happened.” On connecting the dots between a duplicate copy and the urgent need for a palace typist, “Did King Bhumibol know which name was on the proclamation before the doors to the audience chamber opened?” Faulder makes a witness of the reader to some of the more intriguing moments of the early 1990s.

Finally, what makes the work not only informative but enjoyable, is the artful sprinkling of vignettes and anecdotes—odd, amusing, esoteric, personal—throughout its pages. Cambridge University’s Thai language exam was written by Western missionaries who had studied the hill tribe dialects, causing real difficulty for typically urbane Thai students. Lee Kuan Yew told a senior Thai diplomat of his recurring nightmare that Thailand might one day build a canal across its southern isthmus. Equally prophetic, Anand “openly expressed puzzlement” in 1991 at the Nobel Peace Prize being awarded to Aung San Suu Kyi. And the same year, under a veil too thin to impede recognition: “A foreign correspondent in Bangkok was dozing after eating a fine Malaysian curry when a call came through from a Scottish expatriate in Cyprus. The BBC was reporting a coup that morning in Bangkok. Was it true?”

At 491 pages of text excluding appendixes and some photographs, Anand Panyarachun and the Making of Modern Thailand will discourage the non-serious reader; a fair exchange for a book that does its subject justice. More concerning is uncertainty as to its eventual availability in paperback, as the hardcover is unwieldy, expensive, and simply not conducive to the student and workaday markets. It also (wrongly) suggests, akin to college or corporate biographies, that the work is not intended for general readership.

Faulder took an ambitious approach to his bio-history of Anand and his times, and his efforts paid off. Those interested in Thailand should make room on the shelf.