After taking power in a coup in 2014, Thailand’s military junta made multiple promises of how they would change the kingdom. They vowed to clean up corruption, which supposedly had spiked under the Yingluck and Thaksin Shinawatra governments, to reduce political tensions in a country that had seen nearly two decades of partisan fighting and literal street fighting, and to transform the Thai economy, which had been floundering due to political turmoil as well as deep problems in Thailand’s education system, infrastructure, and how state funding is allotted to various regions of the country.

Indeed, in the months after the coup, leaders of the armed forces, including the new prime minister Prayuth Chan-ocha, repeatedly insisted that the army would make fighting corruption a top priority, and intimated that the armed forces would be a nonpartisan group able to manage the economy, at least for a time, without taking from the public till or wasting government money. In fact, many coup supporters, who rallied in the streets of Bangkok in late 2016 and early 2017, with some pushing for a military intervention against the elected Yingluck government , claimed that politicians’ graft was a major reason why they wanted Yingluck ousted. (Whether or not this was the true reason for their anger is a different question; many of the demonstrators may have simply been angry that Bangkok and southern voices were not as influential in Thai politics as they had been before the Shinawatra era, or that the Shinawatra governments were using state resources to build up areas of the country, like the north and northeast, that had historically been marginalized.) Prayuth and other army leaders charged that the Yingluck government had unwisely wasted vast sums of public money on a rice pledging and subsidy scheme, designed to help Thai rice farmers; although the rice subsidy program did not fit the traditional definition of corruption – it was a policy decision that did not work out in the long run, not a quid pro quo – the junta government charged Yingluck and other former ministers in relation to the rice program. In 2017, Yingluck fled the country, and in September 2017 she was found guilty of criminal negligence and given a sentence of five years in jail, likely so that the military could prevent her from returning to politics if an election is held in the future in Thailand.

Yet over the past four years, Thailand’s military has badly undermined the idea that, after the coup, it would somehow be a neutral and wise economic manager, and would not mix business and politics. Instead, even in Thailand’s highly restricted current media environment, local press outlets have discovered that top army brass seem to be unusually wealthy – a problem highlighted by the fact that junta number two Prawit Wongsuwan was caught, in public, wearing vastly expensive luxury watches. Meanwhile, the junta has been accused of stacking certain Thai companies with junta cronies, of boosting defense budgets since the coup, and of making little progress on economic reform.

But the fact that the Thai military is intricately involved in the kingdom’s economy should not come as a surprise to anyone following Thai politics. In reality, as the contributors to the important new volume Khaki Capital show, armed forces throughout Southeast Asia, including in Thailand, have been deeply involved in countries’ economies for decades, extracting massive amounts of funds from state budgets for the militaries and for individual military leaders, and using their political and military power to profit in a range of ways.  The book defines khaki capital as “a form of income generation whereby the military, as the state-legitimized and dominant custodian of violence, establishes a mode of production that enables it to influence state budgets to extract open or covert financial allocations, to extract, transfer, and distribute financial resources, and to create financial or career opportunities.” The armies achieve this economic power by getting funds from government budgets – and often using the militaries’ influence to win budgets larger than probably needed for actual defense allocations – and also by basically stealing from state and private funds through off-the-books army funds, and through investments that armed forces make in private enterprises. In addition, in countries like Thailand today or Myanmar in recent years, where juntas ran or now run the government, army officers are not just extracting revenues from state budgets and using their power to potentially enrich themselves and their allies. They also are closely involved in major decisions on key, national-level economic issues – decisions that have long and significant import of these states’ economies, and also could potentially benefit the armed forces. In maintaining such control of economies, these militaries further entrench their political power – which in turn gives them more leverage to maintain their economic interests as well. 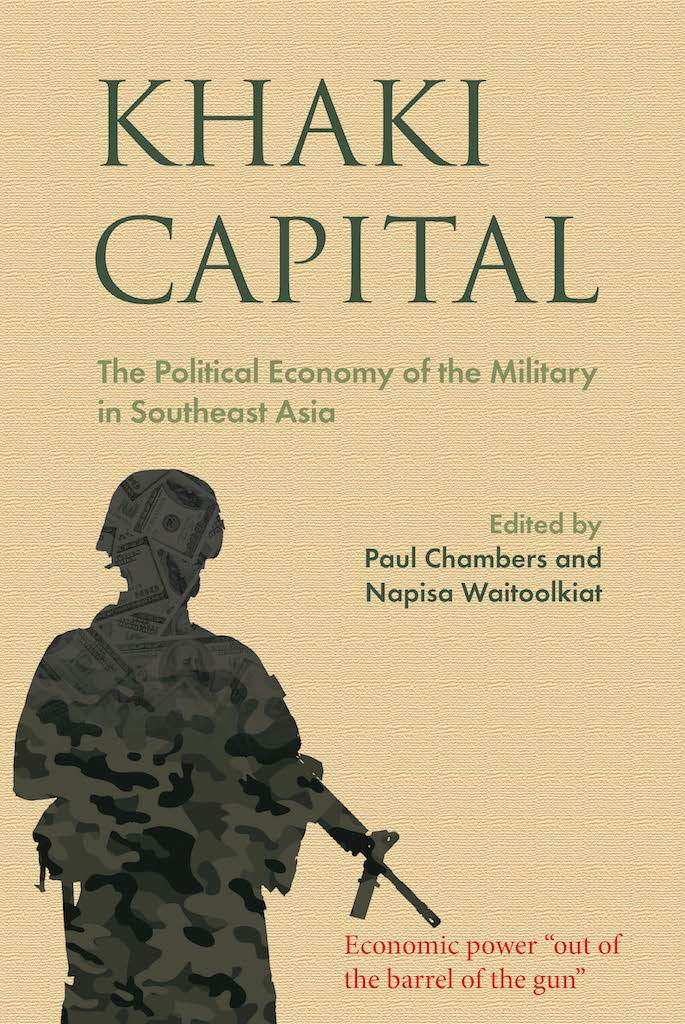 The volume surveys militaries’ economic activities throughout Southeast Asia, including in Thailand, Myanmar, Indonesia, the Philippines, Laos, Cambodia, and Vietnam.  The editors begin by explaining how khaki capital works, in theory and in practice, and in Southeast Asia, before specifically examining Thailand, probably the most notable example of “khaki capital” in the region today. The editors trace the long history of the Royal Thai Army’s involvement in business, which has included seats on the boards of state companies, domination of swaths of the economy, and even profiteering from sectors of the illegal economy, before bringing the RTA’s khaki capital networks up to the present day.  Subsequent chapters examine khaki capital in each of the other countries, before the editors offer some comparative analysis and modest recommendations for how Southeast Asian countries could potentially reduce militaries’ influence over budgets, private sectors, and economies more broadly.

The authors and editors also do an excellent job of outlining how different Southeast Asian militaries have learned, from each other, how to build predatory economic networks – and sometimes, how Southeast Asian militaries often are able to keep their economic networks, especially their networks functioning in the illegal or semi-legal sectors, out of the eyes of civilian politicians, ministers, and the general public.

Although the Thai military’s patronage networks, dominance over security budgets, links to major companies, involvement in illegal economic activities, and general focus on politics rather than actual battles is relatively well known — the military has not been involved in a substantial inter-state conflict since the 1960s and early 1970s– the chapters on the khaki capital networks of other, less well-covered Southeast Asian armed forces are even more compelling to a read interested in Southeast Asian affairs.

In chapter six, Chambers and co-author Hans Lipp draw back the curtain on the Lao PDR armed forces, and their historic and current role in business in the country, a subject about which little has been written and little is known. Other chapters, on the role of the Philippine military in business and the broader economy in the country’s democratic era, and the Vietnamese armed forces’ state enterprises and other means of making money, also are insightful examinations of military business and patronage networks that receive less attention than networks in Thailand, Myanmar, and Indonesia.

Even in a state like Indonesia, where democracy generally flourished in the past two decades, and the military went from dominating politics out in the open to at least being publicly subservient to civilian leaders, the armed forces remain highly influential politically, and still able to wield aspects of their own “khaki capital.” Networks of retired Indonesian army officers are highly placed throughout the boards of the country’s most powerful state and private companies, and the Jokowi administration has surrounded itself with current and former military officers, which dot Jokowi’s cabinet and wield power over many ministries.

In fact, in many respects, Southeast Asian militaries’ power over economic resources actually may be increasing,  as well as armed forces’ ability to channel economic wealth to themselves , their business allies, and their families. This economic power could further increase over the next decade – or, as some of the contributors to the volume note, militaries could splinter, fighting over spoils. In fact, the armed forces in Southeast Asia often have proven capable of keeping their vast economic networks even when they formally accept civilian rule of militaries, or when countries transition to democracy. However, democracy continues to look endangered in Southeast Asia, so many Southeast Asian militaries may not even need to contend with the threat of democratic politics.

The book shows, for instance, that despite some degree of political transition in Myanmar, the Myanmar armed forces – still the country’s dominant political actor – have set themselves up to retain power over budgets, over many powerful companies, and indeed over much of the whole economy. In Cambodia, as I have noted [LINK TO MY WORLD POLITICS REVIEW PIECE ON THIS TOPIC], any eventual transition from the Hun Sen regime to some successor government, such as a CPP regime led by Hun Sen’s son Hun Manet, would probably empower the armed forces, whose support Hun Manet will need (particularly the support of Hun Sen’s bodyguard unit) to stay in power after Hun Sen is gone. The contributors of the Cambodia chapter note that, in a Cambodia succession case, the armed forces could wind up splintered and fighting against itself as well.

In Indonesia, where Islamist groups are becoming more involved in politics, and more aggressive, the Jokowi administration is relying more on the armed forces for domestic security, potentially allowing the military more influence over budgets and politics generally as well. In Thailand, an election in 2019 (which may or may not happen anyway) will not alter the Royal Thai Army’s deep rooted khaki capital networks; the military has created an electoral system and set of institutions that likely will give it outsized sway over politics and the economy for decades to come. The editors note, “in sum, in post-2014 Thailand, khaki capital continues to operate successfully across three different levels: institutional, factional, and individual.”

Meanwhile, in the Philippines, the Duterte administration, though powerful, still recognizes that it must keep the armed forces behind it. It requires the army’s support to avoid any repeat of 2001, when another popular and populist president, Joseph Estrada, was ousted in a kind of coup. In Laos, the Thongloun Sisoulith government relies on the armed forces to maintain order, in a country where the ruling party’s legitimacy could be threatened by continued one-party rule, high levels of graft, and inequality.

Ultimately, the editors, offer only brief thoughts of ideas for how Southeast Asian states could reduce the power of their militaries’ khaki capital networks, even though states in some other parts of the world, like Latin America and Southern Europe, have succeeded in mostly curtailing their own forms of khaki capital, including the corruption and other patronage networks that come with continued military involvement in business and economies. Indeed, the editors suggest, the khaki capital networks in Southeast Asia long may remain the most deep-rooted in the world.

Reviewed by Joshua Kurlantzick
Joshua Kurlantzick is senior fellow for Southeast Asia at the Council on Foreign Relations (CFR). He is the author, most recently, of A Great Place to Have a War: America in Laos and the Birth of a Military CIA.