In recent years we have seen a number of important and ground-breaking works by young Indonesian scholars that show awareness and contribution to a common historical project of “against forgetting” state violence of Indonesia’s New Order regime  (see Sasongko 2003; Budiawan 2004; Roosa, Ratih and Farid 2004; Susanto 2005). In line with this endevour, we now have two interesting works in the form of comic books that visualize the darkest episodes of the New Order regime: Djinah 1965, Years of Silence on the anti-communist purges and mass murder in 1965-66, and Sepenggal Catatan Merah on the tragedy of May 1998. These two works obviously propose a new approach to a controversial issue in Indonesian history for young Indonesians in a popular and accesible medium. 1

Djinah 1965, Years of Silence, was created by Evans Poton, a young graduate from Institut Kesenian Jakarta/IKJ, (Jakarta Art Institute) in 2012. His interest to create a comic book began after he had an incidental encounter with the 1965/1966 survivors. 2 He was particularly sympathetic to Ms. Sudjinah (1928-2007), a member of Gerwani (Gerakan Wanita Indonesia or Indonesian Women’s Movement, considered as the Women’s wing of the Communist Party), who was imprisoned by the New Order for 16 years. The work portrays the real life of Sudjinah (the protagonist “Djinah” – as the title suggests) in four sections. As a general background to the story, it gives a short description of Djinah’s childhood and the political situation in Jakarta in August 1965.

The first section, “1 October 1965,” pictures the situation at the Gerwani’s headquarter in Matraman on the morning of 1 October 1965 where its members were puzzled by what had occurred at the dawn of that day when the killing of six generals took place. The second section, “Dalam Pengejaran” (On the run), describes the terror that spread throughout the country with the hunt and assault against communist activists. The protagonist Djinah fled for her life as Gerwani members were accused for the responsibility of the killings of the six generals. The third section, “Pesakitan Politik” (Political convicts), illustrates the mass murder of allegedly communist members in a countryside, and how Sudjinah had to survive in a small town after leaving Jakarta. The fourth section “Gerakan Bawah Tanah” (Underground movement), portrays the underground resistance of Djinah and her two female colleagues, Sulami and Sri Ambar, when they published the newsletter of  PKPS (Pendukung Komando Presiden Soekarno/Supporters of President Soekarno’s Command) as a way to counter the New Order’s official narrative of what actually had happened in Sepetember-October 1965. 3 The book ends the story here, and states that it will continue Djinah’s story in the next sequel. As a reference to real life events, the book provides photos and a short biography of Sudjinah.

Poton prefers to call his comic a graphical novel as it is intended for young and adult readers. He uses red color for the cover and black-white for illustrations to bring out the darkness of the story. Sudjinah’s thoughts are presented as narratives. For the storyline, Poton employs “flashbacks” using Djinah’s memories before 1965. One minor shortcoming in the story is when it tells an episode about Sulami (pp.75-78), the head title refers to Sudjinah. Since it has been distributed widely through the internet using social media, it seems that this work has succeeded in drawing the attention of young readers. Available online:
http://www.mediafire.com/download/dhncy9od1h7s1r0/Djinah+1965_GRAPHIC_NOVEL_by+Evans+Poton+-+Kamengski.pdf

Sepenggal Catatan Merah, Sebuah Komik tentang Tragedi Mei 1998 (A red note’s fragment, a comic book on the Tragedy of May 1998) was created by Hendra Bhakti, a student of Tarumanegara University, Jakarta. It deals with the violence and social unrest that occurred toward the end of the New Order regime with the resignation of Soeharto. With this social unrest, there were reports of assault, loot and plunder (there were also reports of rape and killing) against the Chinese Indonesian communities in major cities like Jakarta, Palembang, Medan, Solo, and Surabaya. This social unrest is commonly known as “Tragedi Mei” (The Tragedy of May 1998) and forms the subtitle of Bhakti’s work. As such, the book is published in remembrance of the victims and a means to campaign against forgetting the historical event itself.

Bhakti presents his work in five parts. Before he starts the first, he depicts a short historical background of the New Order regime and the 1997 economic crises that led to the regime’s downfall. The first part, “Timah Panas untuk Mahasiswa” (Hot bullet for the students), depicts the situation when students of Trisakti University started to organize a public protest on 12 May 1998. The protest was met with the army shooting and caused the death of four students in the late afternoon. The second, “Pesta Rakyat” (The party of the People), describes a group of army-led provocateurs that incited the angry mass to start looting shops nearby. It also depicts an unknown human corpse which was thrown into the middle of the paddy fields on either the night of 13/14 May 1998. The third, “Gelap Metropolitan” (Metropolitan darkness), portrays the sexual violence against a woman on the following day. The fourth, “Telepon Misterius” (Mysterious phone call), illustrates the phone-terror against a medical doctor who handled the victims of the mass-riot in a public hospital. The fifth fragment, “Memori” (Memory), presents the testimony of an ex-member of the army who was on duty in May 1998 in Jakarta. He was traumatized by the violence and recounted his personal experience. The book ends with the documentation of photos and references used for the illustrations. 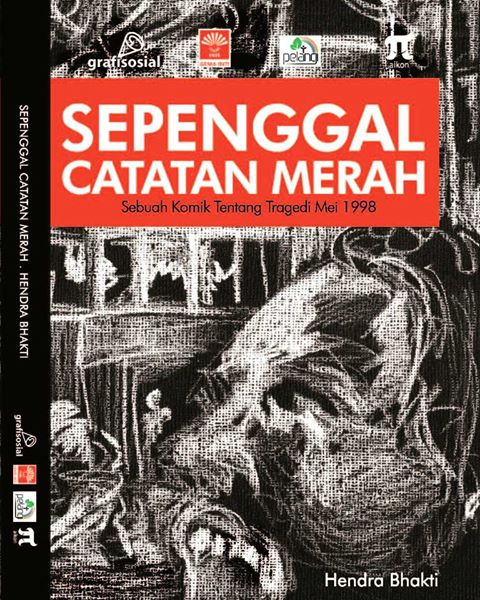 As with Evans, Bhakti also uses black and white colors. He depicts the figures of provocateurs or rapist without a face to emphasize the fact that the tragedy of May 98 is still an unsolved case. Although it describes all characters anonymously, it would have been more useful if Bhakti, as the creator, could have provided more detailed images of the security officers who were in charge at the time. Nonetheless, we highly appreciate this work as an important step in representing what happened, especially since it arises as a conscious cultural product by one of the Indonesia’s most talented young artists. His creative contribution challenges us to not forget the tragedy of May 1998.

As a comic book, Djinah 1965 and Sepenggal Catatan Merah helps readers to identify themselves with historical events through visualization of the victims’ narratives (see McCloud 1993). While previous scholarly works on the events of 1965-1966 killings and the tragedy of May 1998 have delivered convincing evidence and analyses, both works creatively foreground the living memories on violence of the historical events. As such, both works provide readers with a critical understanding of the historical events and this allows them to sympathize with the victims of state violence perpetuated by the New Order. In the context of Indonesia’s current search for peace and reconciliation, both works make an important cultural contribution in cultivating public memories of the events.