This article is to set a broad proposition about examining the Sino-Thai relations through cultural linguistic aspects. In this regard, today it is common to hear leaders from China and Thailand frequently express their close ties by stating that “the Chinese and the Thais are the same family” (中泰一家親).

The frequent explanation of this intimacy normally refers to their mutual politico-strategic and economic interests that have existed since the 1980s Cambodia Conflict. The relationship is also reinforced by the belief of their historical contacts, including trade, intermarriage, and similar values, that date back to the thirteen century. 1 However, one interesting observation arises regarding the use of this metaphor of intimacy: Other countries do not describe their relations with China in kin terms. Even Singapore, a country with an ethnic Chinese majority, has been very careful not to adopt the “kinsman country” in its identity with China. 2

In this short article, the author suggests looking deeper at the construction of this metaphor, and proposes that identity/image building between Thailand and China as reflected by the metaphor was rather the Thai state’s strategy to cope with its internal consolidation of power rather than a product of their foreign relations per se. However, the image has become a normative order in which the Thai state later adopted to socialise with China in the foreign policy arena. 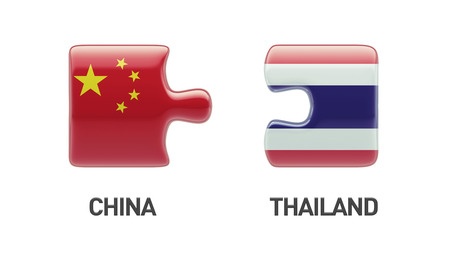 Chinese as the otherness

Contrary to the belief of the bonds between the Chinese and the Thai, in fact, the Thai state was relatively ambivalent in adopting its kinship image with the Chinese in its major narrative. In most part, Thai society viewed the Chinese as the other under the Thai feudal (prai) system. 3 In the nineteenth century, the divide between the Thais and the Chinese immigrants was also reinforced by the treaty with the European powers, under which some Chinese opted for the colonial protection to secure their economic interests. Despite the long history of intermarriage between the two groups, the Chinese still remained the other until they assimilated into the Thai socio-legal structure. In such case, they subjugated their formal Chinese identity and adopted Thai ones such in as names, practices, and norms, to secure their political and economic privileges. 4

Moreover, the Thai state has remained suspicious of its Chinese minority throughout the history. Many Chinese groups control major economic activities in Thailand such as the rice trade, major export crops, the mining industry, the port operation, and banking. In the past, some Chinese also engaged in illegal businesses such as opium dens, gambling houses, and protection rackets. Conflicts between clan groups have occasionally escalated to violence or even riots, both in Bangkok and other port cities, and these bring headaches to the authorities. In the early 1900s, the Thai state was also concerned about growing republicanism amongst the Chinese in the kingdom which was associated with Sun Yat Sen’s political campaign against the Qing Dynasty. Similar security unease was also felt after the Second World War when China explicitly supported the communist movements throughout Southeast Asia.

Therefore, the Chinese in Thailand have been subject to state monitoring, control, and regulation. This is evident in anti-Chinese policies that were implemented in different periods, including King Rama VI’s anti-Chinese sentiment, the nationalist Phibun government during World War II, and the anti-communist policy in the Cold War. Under these circumstances, the Thai state forced the Chinese, for example, to naturalize, cede their Chinese practices and education, and nationalize their businesses. Given this history, the Otherness of the ethnic Chinese in Thai society continues in the present day.

Self-affiliating with the Chinese world

In parallel with the control over the Chinese, the Thai state also opted for a soft strategy to manage the Chinese problem through constructing a cultural affinity with the Chinese. Close association with Chinese-ness was purposely identified mainly for political and economic reasons, especially as a strategy to consolidate Thai state power.

The Thai state showed its affiliation with the Chinese world after the fall of Ayutthaya, understandably as a foreign policy strategy for the new kingdom to regain political recognition and tributary trade with the Middle Kingdom. The Thai court expressed its Chinese identity in an attempt to reestablish contact with China, evidenced by King Taksin and the Chakri kings referring to themselves with a Chinese family name, Zheng (鄭). 5 However, this identity can be only seen as one sided as there was no place for “barbaric” people on the frontier to claim to be kindred with the Chinese Empire. 6 However, the presence of European powers in Asia became a new reality to which Siamese elites needed to pay more attention. Siam, therefore, distanced China after the last tributary trade in the early reign of King Rama IV. 7

Despite the decline of Pax Sinica, the Thai elites did not totally abandon its association with the Chinese world. The Thai elites still enforced cultural affinity with the Chinese as a strategy to tackle the aforementioned internal challenges posed by the Chinese communities within Siam. 8 The reinforcement of its affinity with the Chinese can be seen in the Siamese court incorporating Chinese practices in its regular ceremonies since King Rama IV such as Chinese style funeral 9 and ancestral worshipping. By doing so, the Thai state hoped to consolidate its legitimacy and governability over this new emerging social group amid the European colonial threat. The Thai state started to incorporate a family image somewhere between the Chinese and the Thais in its historical narrative in the reign of King Rama VII for the same purpose. King Rama VII unfailingly included a phrase, “the Thais and Chinese are like brothers/relatives” in his speech during several visits to Chinese communities. This was a strategy to cement racial relationships and to mobilise the Chinese support to the state affairs during the economic difficulty. 10

The post-revolutionary governments before the Second World War also continued with the same strategy despite its nationalist tendency. The Thai state popularized Khun Wichitmatra’s version of the historical narrative of the Thai race migrating from the Altaic area in Central Asia through the present-day China. This version envisioned the Thai race as an elder brother of the Chinese, 11 which allowed the affiliation of the two to fit within the nationalist agenda.

Some interesting evidence of the constructing of this family identity can be seen in a song called “The Chinese and the Thais in unity” (จีนไทยสามัคคี) composed in 1937 by another nationalist propagandist, Luang Wichitwathakarn. The song was part of a new play about King Taksin, demonstrating the unity of different races that helped save the nation. The song portrays the brotherhood and mutual support between the Chinese and the Thais cultivated through the history. The lyric goes like this:

Within the political context after the overthrow of the absolute monarchy, this attempt can be seen as the Thai state attempting to boost the support of the Chinese community for the new regime. However, the anti-Chinese policy reappeared due to the situation under which Thailand aligned with Japan during the World War II. The family image also suffered from political disruption in mainland China and its support of communism in the region during the peak of the Cold War.

The modern use of the family image

However, it is interesting to observe that the family image has gained momentum gradually after the normalisation of diplomatic relations between China and Thailand. It appears that the Thai elites were not hesitant to adopt the same normative framework to deal with the Chinese towards the end of the Cold War. The language that reflects family identity and close affinity has been an important tool for the Thai state to socialise China in different circumstances. In the 1980s, this tool was to secure China’s support for Thailand’s position in the Cambodian conflict, while it has supported Thailand’s economic engagements with Beijing in the post-Cold War period. In several contexts, it becomes a reassurance for the Thai elite who sought political endorsement from Beijing both in civilian and military governments.

Much evidence demonstrates this tendency. Former Prime Minister Chatichai Choonhavan stated “Thailand and China are brothers” to describe the Sino-Thai relations in a formal banquet during his visit in 1989. Former PM Prem Tinnasulanond also emphasised the similar expression during his conversation with Former PM Li Peng in early 1992. He stated that “bilateral ties have been strengthened regardless of change in our internal politics. This is because the Thais and the Chinese have close historical bonds, which can be regarded as brothers”. Interestingly, PM Li Peng did not respond with the same tone, but only focused on mutual interest. 12

However, Thailand has untiringly introduced this family image to represent its good ties with China especially in recent time. The role of the Thai Royal Family as part of this attempt cannot be ignored. Notably, Princess Sirindorn has studied Chinese language and culture since her childhood, as well as writing about her travels in China regularly. Princess Chulaborn is also known for her Chinese zither skills. She has organised concerts to showcase her skills and Chinese and Thai performances under the “Chinese and Thais are family” banner, these have taken place alternately in China and Thailand since 2001. The same phrase has also been used widely in Thailand to promote people-to-people contact such as Chinese public speaking competitions or Sino-Thai business events.

It is clear that China has given Thailand leeway to use this family image implicitly since the early 1990s. At least, public promotion of Princess Chulaborn’s concerts since 2001 can suggest that China has bought into the image that Thai leaders constructed and imposed this as a core identity between the two nations. Recently, this family image has gained more popular recognition amongst the Chinese. Official use of this phrase has also been seen more regularly, although it is still open to question whether this acceptance by the Chinese is merely just an accommodating gesture. For example, Former Vice President Xi Jinping during his visit to Thailand in 2001 also include this phrase in his speech. 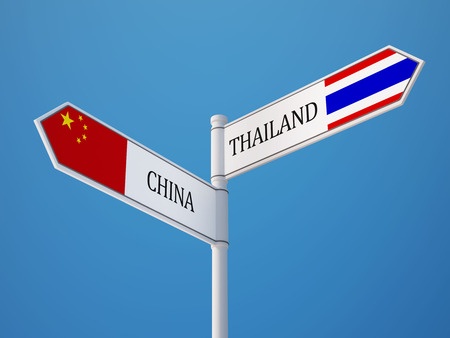 The author has proposed here that this family image constitutes a normative order in which Thailand perceives itself as having a kindred affiliation with China. This family image may correspond to the pre-existing hierarchical social order, and with this in place, stirring up conflict would violate family norms and therefore should be avoided.

This examination has an important policy implication for the current development of Thailand’s relations with two contending powers, China and the United States. In this picture, Thailand has attempted to nurture good relations with Beijing throughout the post-Cold War period. Whereas relations with the US, generally described as an old friend, have experienced ups and downs. A plethora of research focus on politico-strategic and economic factors in these relations; however, ideational aspects of these relations are relatively under-explored. A State may perceive of itself and others (identities/images) such as friends, enemies, superiors, and subordinates. These images can inform which type of policy response a state may choose to pursue in the first place regardless of the other’s real intention. 14 One way to investigate such ideational influence is through looking at the use of language. Language is another means that constitutes political reality regarding ideas and values shared in a society. Therefore, ‘language, whether official or private, rhetorical or observational, has a lot to tell us about both mind‐sets and actions, and it is a relatively untapped resource’. 15 Therefore, future research to further explore the ideational aspects embedded in these relations can enrich our understanding not only of Thailand’s foreign policy behaviour but also the dynamics in the readjustment of the East Asian regional order.