In comparison to other textbooks, the main feature of Introduction of Modern and Contemporary Southeast Asian History (hereinafter, IMCSEAH) is that it is single-authored. Iwasaki Ikuo (currently, Professor at Takushoku University) starts his research on Singapore politics at the Institute of Developing Economies (IDE) and has expanded his research into various important topics, such as political parties, developmentalism, democratization, Chinese business, and so on. 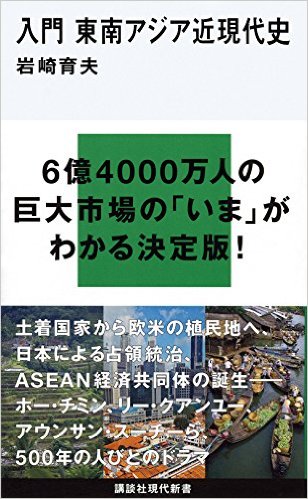 IMCSEAH focuses on politics, economy, and international relations since the colonial era to the present and also, considers the characteristics and future of Southeast Asia (p.5). To describe the characteristics of Southeast Asia, Iwasaki, interestingly, uses the old Javanese phrase, ‘Bhinneka Tunggal Ika’ (Unity in Diversity). On the diversity element, Southeast Asia has various political regimes (democracy, socialism, military junta, single-party rule and absolute monarchy), economic activities (export of primary products like oil, tin, and rubber, the manufacturing industry, and a hub of commerce and trade), and historical experiences (different colonial rules by Europe and USA). On the unity or collaborative element, Iwasaki raises ASEAN and its regional integration programs. He thinks this ambivalent duality is the key to understand the modern and contemporary history in Southeast Asia. For him, the purpose of the book is to give an image of Southeast Asia to Japanese readers if not completely describing the detail (p.10, p.278).

The introductory chapter of IMCSEAH presents readers with the natural environment of Southeast Asia. This environment factor is important in shaping the ‘indigenous state’ (dochaku kokka: 土着国家) – a concept Iwasaki uses to explain the pre-colonial state formation in the region. The indigenous states in Southeast Asia had three points in common: Hindu/ Indian cultural influences, ambiguous national borders, and the importance of the region as intermediate trade between China and India. Chapter One looks at the colonization processes of Southeast Asia by European powers and the social and economic changes of Southeast Asia during the colonial era. Chapter Two explains Japan’s occupation of Southeast Asia during the Pacific War (1942-1945). Chapter Three covers the post colonial period with independence struggle and unrest years of 1945 -1964. The concept of modern state apparatus like bureaucratic systems and the nation was brought in by the European colonial power. The independent state after the World War Ⅱ was based on the colonial state. After these political unrest years, governments in Southeast Asia started to focus their attentions on economic development of their respective country. Chapter Four covers the ‘developmental state’ (開発主義国家) from the latter half of the 1960s to the 1990s, and the democratization process from the 1980s. The developmental state in Southeast Asia promoted the state-led economic development in exchange for suppression of the opposition and human rights. After the economic development under the developmental state associated with authoritarian regime, Southeast Asian countries are starting with the democratization process. In this regards, one of the core themes of IMCSEAH, from Introductory chapter to Chapter Four, is to show the different characteristics of the state in the each era. It succeeds to capture the essence of various state characteristics and convince readers to understand the changes of the state and its formation.

Chapter Five looks at the economic development and industrialization. Chapter Six covers ASEAN as a regional institution. In these chapters, readers can understand the region’s move for economic development and the ASEAN integration process as Iwasaki explains not only the regional but also the extra-regional actors in that process. Japan’s active roles for the regional economic development in the style of Official Development Assistance (ODA) is one example. Japan’ Fukuda Doctrine in 1971, which pledged that Japan would commit to peace and builds up a relationship of mutual confidence and trust with Southeast Asian countries, is also mentioned.

Although academics and professionals working on Southeast Asia may feel the publication might be a little short on descriptive elements, Iwasaki succeeds in offering a clear image of Southeast Asia for beginner-level readers by using effective and simple keywords. I believe the Japanese business community working in or with Southeast Asia could find it most useful.

From my experience in giving lectures on Southeast Asian politics and society over these past two years, I find many undergraduate students in Japan are lacking basic knowledge about Japan’s invasion and military rule in Southeast Asia. In that sense, the gap in historical understanding between Japanese and Southeast Asian youth is expanding and worrisome. As such, Chapter Two as an independent chapter, although short, offers an important oasis for Japanese readers, especially young students in high schools and universities. Therefore, I consider this book as one of the best textbooks for Japanese undergraduate students, in these blooming years of publication.